Lawmaker: “Retirement Hike for Legislators Was ‘Right and Fair'” 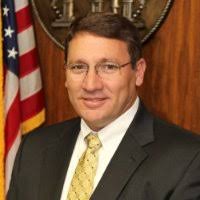 One Georgia lawmaker is defending a vote to increase his own retirement benefits after a series of comments on social media appeared to show a lack of support for the bill voted on by the Georgia House of Representatives last week.

House Bill 624 increases retirement benefits for state legislators to 38% of their pay monthly, up from $28.00 a year for each year served as currently on the books. Lawmakers earn $17,342 annually, or $1,445.16 per month, though they only serve for 40 days (roughly 3 months) per year. The numbers would equate to approximately $550 in retirement benefits each month. The legislation also allows members to accept a $50 per year of service monthly stipend, instead of the 38%, in retirement. The percentage language is likely paving the way for an increase in lawmaker pay as proposed last fall. The language ultimately passed the House on February 28.

AllOnGeorgia posted articles around the state Saturday detailing the votes of members of the Georgia House who voted YES on the lawmaker retirement bill. State Representative Dominic LaRiccia, who represents Bacon, Coffee, and Jeff Davis counties in rural South Georgia, took to his own social media page and the social media pages of AllOnGeorgia on Sunday to defend his action. He called the increase, which more than doubles retirement benefits for lawmakers, “right and fair” before voicing a prayer requesting protection from ‘stupid people.’ 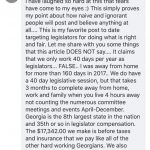 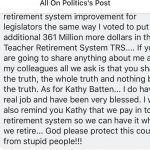 LaRiccia also made note that lawmakers must pay taxes on their earnings and, under the new language, add 9.5% of their earnings instead of 7.5% to the retirement system. He took AllOnGeorgia to task over the notion that lawmakers work 40 days per year (spread out over three months) for their $17,000 annual salary, saying he spent many days away from home.

LaRiccia, seemingly feeling victimized, justified the hours outside of session as need for additional compensation and alluded to the fact that Georgia lawmakers are not paid enough.

LaRiccia failed to mention the per diem reimbursements for days outside of session, which total $173 per day, plus mileage expenses. Lawmakers are given a $5,000 annual expense account and are also permitted to use their campaign accounts for lodging, food, and other expenditures. LaRiccia, in January 2018, showed more than $74,000 cash on hand in his campaign account.

What’s in the campaign account and how is it being spent?

A look at his most recent campaign disclosure shows that of the $22,600 in campaign funds raised during the last cycle (July 1 – the start of the legislative session), just $4,300 was from inside or near his district. The remaining $18,300 came from other elected officials, special interest groups and lobbying organizations in and around Atlanta. Some of the donors include Resurgens Atlanta, Cancer Treatement Centers of America, HosPAC, Georgia Propane PAC, and CEMEX out of Houston, Texas.

Like other legislators, LaRiccia uses campaign funds to pay for his rent while working in the legislature, but also for his gas, his cell phone, and his internet services.

Campaign disclosures show LaRiccia charged his campaign account $4,125.37 in fuel expenses during the legsilative off months of 2017, beginning July 1, 2017 and January 15, 2018. [The breakdown was rougly $909 at various gas stations around the state and an additional seven transactions at a fueling station in Douglas ranging from $300 to $625 each.] By the numbers, LaRiccia claims he drives $171 worth of gas per week during the off-weeks of the legislative session for legislative work.

He also charged his campaign account $332 per month for cell phone services, paid $900 in campaign dollars for a phone, and made a $500 donation to the U.S. Senate candidate in Michigan.

Based on the campaign expenditures filed by Representative LaRiccia himself, it appears that very few expenses are going uncovered, opposite of how it was presented in his rebuttal.