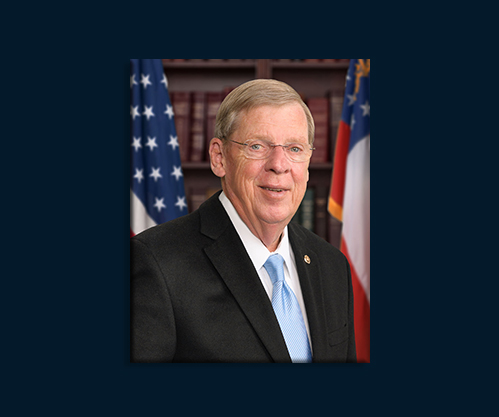 “Georgia has lost a giant, one of its greatest statesmen, and a servant leader dedicated to making his state and country better than he found it,” said Governor Brian Kemp. “Johnny Isakson personified what it means to be a Georgian. Johnny was also a dear friend to Marty, the girls, and me – as he was to so many. He answered the call to public service many times over his career as a state legislator, minority leader in the Georgia House, chair of the State Board of Education, Congressman, and finally as Senator.

“His work to champion our veterans, deliver disaster relief for Georgia farmers after Hurricane Michael, and always stand up for Georgia’s best interest in the U.S. Senate will live on for generations to come,” continued Kemp. “As a businessman and a gifted retail politician, Johnny paved the way for the modern Republican Party in Georgia, but he never let partisan politics get in the way of doing what was right.

“Above all, Johnny was a wonderful father to his three children and a devoted husband to Dianne. Our family is sending our deepest condolences and prayers to the Isakson family, his former staff, and all lucky enough to call Johnny a friend. Georgians across our state join them in mourning the loss of one of our best.”

“When I was a young man just getting started in politics, I wanted to be like Johnny Isakson,” said Carr.

“Johnny was the first person I voted for when I was 18 and was the first person I worked for in politics. Over time, he became a mentor and a close friend. I will never forget the time spent with him, whether in the halls of the Senate or the back roads of Georgia. And I will always be grateful for his wisdom and guidance, and how he taught us to live life as if there were only two kinds of people – friends and future friends.

“Johnny Isakson exemplified everything you would want in a public servant, and he will be remembered as one of the greatest Georgia ever had. I try to live up to his example every day.

“Joan’s and my heart go out to all of the Isaksons, who over the years became like family to us.”