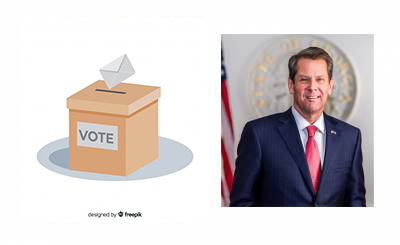 From the Governor’s office:

“First of all, this is a manufactured crisis from those that are profiting off of it, and the bill does, as we’ve always tried to do in Georgia and that’s make it easy to vote, hard to cheat, doing really common sense things that I think will make our elections even smoother in the state of Georgia, replacing the signature match with the voter I.D., which is free in Georgia, by the way, securing drop boxes around the clock, which didn’t exist before this legislation that I signed the other day. Common sense things like requiring poll workers to continue tabulating ballots until all votes are counted and then expands voting access, especially on the weekends. And it’s amazing that people are against those common sense measures.”

Listen to the full interview here.

However, the law did make some changes to early voting. But experts say the net effect was to expand the opportunities to vote for most Georgians, not limit them.

Breitbart: Exclusive — Gov. Brian Kemp: Georgia Law ‘Cures a Lot of the Problems that We Saw in the Last Election’

“The nuts and bolts of [the law] are this, it makes it easy to vote and hard to cheat. The biggest — probably the top four things to me — is it replaces a signature match with a voter ID on absentee ballots. It secures ballot drop boxes around the clock. It also requires poll workers to continue tabulating ballots until all votes are counted and then it actually — contrary to what the national media and those that are profiting off of this whole exercise of not being truthful with people — expands voting access, especially on the weekends.”

Listen to the full interview here.

No election rules are perfect. Ballot access, integrity and administration are all important. Mr. Biden knows this. Democrats aren’t smearing Georgia because they believe their “Jim Crow” nonsense. Their strategy is to play the race card to justify breaking the Senate filibuster, so they can jam through their election reform known as H.R.1 and overrule 50 state voting laws.

While you would not learn this from the Democrats or their sympathetic media coverage, S.B. 202 actually takes steps to fix those long lines. Georgia law previously allowed the state to override local election officials and require them to add more precincts or voting machines if people were left standing on line for an hour after the polls closed. S.B. 202 expands that authority, so that the state can step in and require more polling places or voting machines if voters in overcrowded precincts face lines of an hour or more at any of three measured intervals during the day.

…This is the right direction: Instead of allowing electioneering while people wait on long lines, eliminate both the electioneering and the lines. That’s what Joe Biden’s ranting is supposed to distract you from hearing.