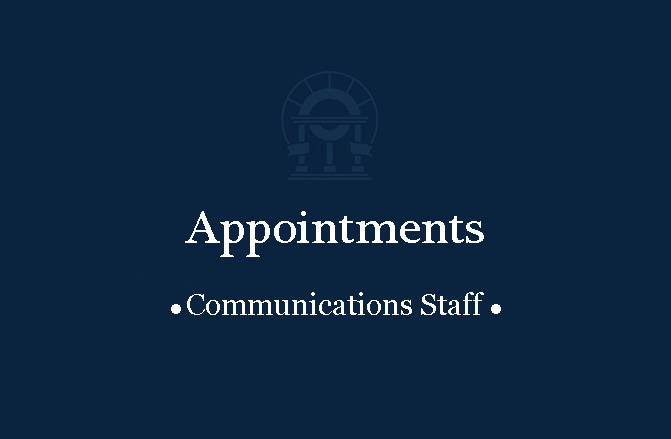 Joining the communications department is Garrison Douglas who recently began serving as the Governor’s Press Secretary.

Andrew Isenhour is Director of Communications in the Office of Governor Brian P. Kemp. Prior to joining the governor’s staff, he served as Director of Communications for Stand Together in Washington, D.C. and worked in communications at the Board of Regents. Andrew also worked in the administration of former Governor Nathan Deal for seven years, including as chief speechwriter throughout Deal’s last term in office. He then assisted Deal as he chaired the Council on Criminal Justice Task Force on Federal Priorities and briefly during Deal’s tenure as a Regents Professor at the University of North Georgia. Andrew earned a bachelor’s degree in Political Science from the University of North Carolina at Chapel Hill, a graduate certificate in Public Administration from the University of Virginia, and an MBA from North Carolina State University. He attends Mount Paran Church.

Garrison Douglas is Press Secretary in the Office of Governor Brian P. Kemp. Prior to joining the governor’s staff, he was the Georgia Press Secretary for the Republican National Committee during the 2022 midterm election cycle. Garrison also served as a legislative aide to now House Majority Leader Chuck Efstration during the 2021-2022 legislative session. He attended Georgia Gwinnett College where he pursued a bachelor’s degree in Political Science. Garrison resides in Fulton County and attends Cross Pointe Church.

Carter Chapman is Deputy Press Secretary in the Office of Governor Brian P. Kemp. He has served as a member of the communications department since May 2021, covering a wide range of responsibilities and projects. A lifelong Georgian, Carter holds master’s degree in Mass Communications and bachelor’s degrees in Public Relations and Political Science from the University of Georgia. He and his wife reside in Cobb County.