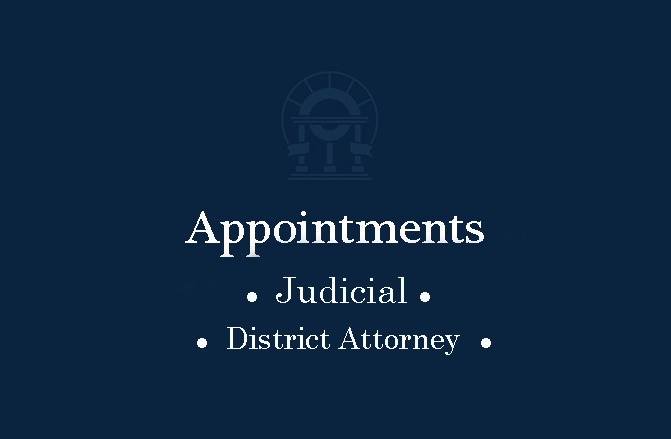 Governor Brian P. Kemp today announced that he has appointed Stacey S. Jackson to fill the Chattahoochee Judicial Circuit District Attorney vacancy. Pythias “Pete” Temesgen has also been appointed to the State Court of Muscogee County to fill the vacancy created by the appointment of the Honorable Benjamin Richardson to the Superior Court of the Chattahoochee Judicial Circuit.

Stacey S. Jackson has been appointed by Governor Brian P. Kemp to serve as District Attorney for the Chattahoochee Judicial Circuit. Attorney Stacey S. Jackson is a native of Harris County, GA. Mr. Jackson began his formative education in the Harris County School System. In 1992, he graduated with honors as class Salutatorian from Harris County High School. Mr. Jackson was the recipient of the distinguished full four-year Presidential Scholarship to Albany State College, now known as Albany State University. While at Albany State, he was president of the Chi Epsilon chapter of Omega Psi Phi Fraternity, Inc., a member of the Student Government Association, and a member of the Alpha Kappa Mu national honors fraternity. Mr. Jackson was also a member of the Albany State baseball team as they won the SIAC Conference Championship in 1994.

After receiving his Bachelor of Science degree in Criminal Justice in 1996, Mr. Jackson moved on to the University of Dayton School of Law, where he was again awarded a tuition scholarship. While in law school, he was a member of the Black Law Students Association, Criminal Law Alliance, and Phi Delta Phi Honors Legal Fraternity. After earning his Juris Doctorate degree in 1999, Mr. Jackson began his legal career with a clerkship working with Superior Court Judges Douglas C. Pullen and William J. Smith. In 2000, he joined the Office of the District Attorney as an Assistant District Attorney handling an assortment of major felony criminal cases. During his tenure as a prosecutor, several of his cases received national attention, including Mr. Jackson appearing on CBS’ nationally televised series “48 hours”. In 2008, Mr. Jackson joined Richard Hagler, Stephen Hyles and Susan Henderson to form the law firm of Hagler, Hyles, Henderson & Jackson (now Hagler, Jackson and Walters). One of Mr. Jackson’s defense cases has also appeared on the nationally televised show “Fatal Attraction” on channel TV One.

Mr. Jackson is married to Mrs. Mitzi Jackson, an educator, and has two sons, Andrew and Aiden. He and his family attend Cascade Hills Baptist Church in Columbus, GA.

Pete Temesgen has been appointed by Governor Brian P. Kemp to serve on the State Court of Muscogee County. Previously, he was an attorney at Huff Powell Bailey, LLC, where he has practiced since 2017. The firm is recognized for its significant trial work in complex civil litigation. Prior to that, Pete was an assistant district attorney in Columbus, Georgia and a law clerk to the Honorable Benjamin Richardson and Honorable John Allen. Pete earned his law degree from Boston University School of Law and his undergraduate degree from Princeton University. He is a very active member of the Columbus community, serving in leadership roles at the Springer Opera House and the Young Lawyer’s Division of the Columbus Bar Association. He is also the mayoral appointee of the Public Safety Advisory Commission. Previously, he was the president of the Fountain City Bar Association, the local African-American bar. Pete is also a proud member of the Leadership Georgia Class of 2019. Pete and his wife, Natalia, live in Columbus, with their two children, Aria and Paul.