The Abrams-backed voter advocacy group in Georgia has filed for a Temporary Restraining in federal court over another group’s challenge to hundreds of thousands of votes cast in Georgia – the same group that is calling on a federal judge, who is the sister of Stacey Abrams, to recuse herself from the case. 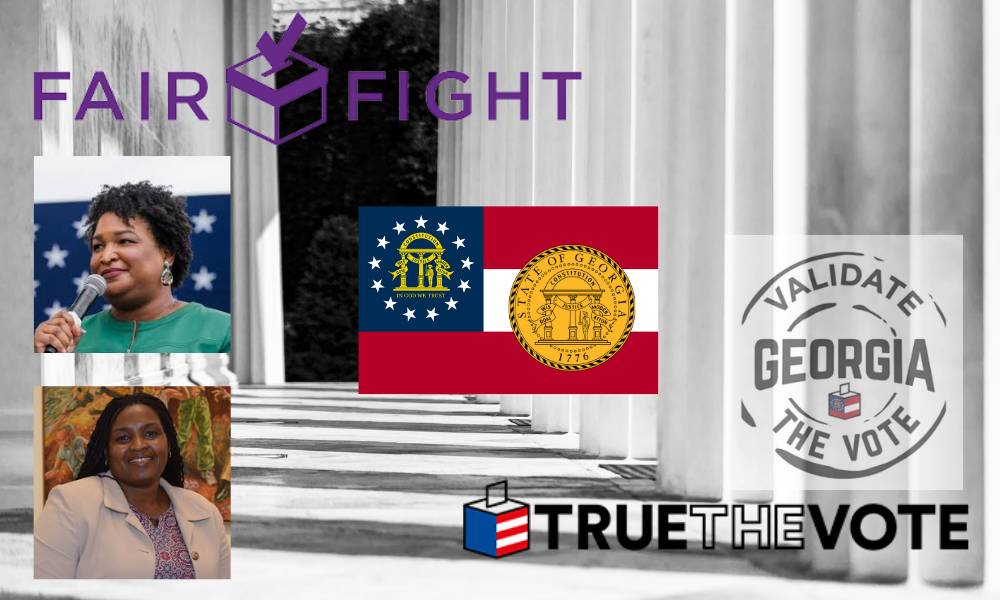 A voter advocacy group in Georgia has filed for a Temporary Restraining in federal court.

Fair Fight filed an Order on Tuesday seeking to stop True The Vote from “illegally challenging voters.” True The Vote, according to its website, is the country’s largest voters’ rights organization and well known for the ‘ability to lead unified national plans to protect election integrity.’ The group launched in 2009.

The move is the latest in a series of legal filings from a number of groups, but is in direct response to True the Vote’s announcement ahead of the holiday that it had submitted 364,541 Elector Challenges on behalf of Georgia voters representing all 159 counties. From the press release on the submission, “an Elector Challenge is a unique feature in Georgia law (GA. CODE ANN. § 21-2-230). It allows a voter to challenge the eligibility of any other voters in his or her county if probable cause exists to show that the challenged voter does not meet the qualifications legally required to cast a ballot. It represents one of the few vehicles that states have to update voter rolls ahead of an election without compromising any legitimate voters’ right to have their vote counted.”

“Ongoing debates about the November election throughout the country have Americans focused intently on improving the integrity of our elections and restoring the faith of voters. Today we assisted concerned Georgia voters in taking a stand for the sanctity of every legal vote,” said Catherine Engelbrecht, the founder and president of True the Vote. “It is our hope that this historic challenge marks the beginning of the great awakening of American voters to serve our democracy by getting involved in the process.

Fair Fight also responded to what it says is a failure on the part of Secretary of State Brad Raffensperger to do his job when it comes to ‘protecting the rights of Georgia voters and instructing county boards to follow federal law.’

“We are unsurprised that, on the day that Secretary Raffensperger’s corruption and waste of taxpayer dollars is exposed in a bombshell report, he is eager to change the subject, ignore federal law, and defend an organization that is actively trying to disenfranchise Georgians who are taking care of sick family members, relocating temporarily because of the economic crisis, or serving in the military.

“Secretary Raffensperger seems to care more about the ability of a Texas organization with a racist past to illegally coordinate with the Republican Party of Georgia in an 11th hour attempt to disrupt our election than he does about lawful Georgia voters’ right to remain on the rolls. He purposely ignores that 40 county election boards – controlled by both Democrats and Republicans – have rejected True The Vote’s attempt to illegally challenge their voters.

“Raffensperger and out-of-state voter suppression groups may not have an appreciation for federal law or the rights of Georgia voters, but the courts do. Given that Secretary Raffensperger has failed to direct county boards to comply with federal law, Georgia voters’ only option is to seek relief in the courts. It is for that reason that we are filing a request for a temporary restraining order today to stop True The Vote from illegally challenging Georgia voters.

“Fair Fight encourages Georgians to not be distracted, to not be intimidated, and to vote. Call the voter protection hotline at 888-730-5816 with any questions.”

Meanwhile, True the Vote has called on a federal judge to recuse herself because of familial ties. Responding to a ruling by U.S. District Court Judge Leslie Abrams Gardner that suspended the efforts of Muscogee and Ben Hill counties to verify the eligibility of challenged voters, True the Vote called on the judge to recuse herself from the case and encouraged the counties to appeal the decision on Tuesday:

“Judge Gardner’s ruling is wrong on the law, and the glaring conflict of interest – pointed out by Muscogee County – undermines faith in the judicial process,” said Catherine Engelbrecht, the founder and president of True the Vote, an organization that has partner with electors throughout the state to ensure that every legal vote is counted in the January 5 Georgia Senate runoff elections.

One of the defendants, Muscogee County, asked Judge Gardner to recuse herself because her sister, Stacey Abrams, has generated significant fundraising for the plaintiff’s organization and Abrams’ own group has filed a case dealing with the exact same issues against True the Vote.

“Georgia voters have every reason to question a ruling that doesn’t follow the law but does deliver for her sister’s political agenda,” Engelbrecht said. “This entire ruling is based on the idea that these challenges are about removing voters from the registration list – a situation where the judge could apply federal law. These challenges, however, wouldn’t remove anyone from the voter registration list; the challenges are the remedy allowed under Georgia state law to verify that a particular voter is eligible to vote specifically in the January 5 runoff election. Federal law doesn’t regulate that, and the judge’s ruling should be overturned.

“In this case, Gardner’s ruling is based solely on the point of view of the plaintiffs. The counties involved didn’t even get to have their say. Perhaps a fair hearing in the light of day – as opposed to a decree issued in the dead of night – would have given the judge some insight on what’s really happening in these cases.”

Fair Fight’s restraining order is below.