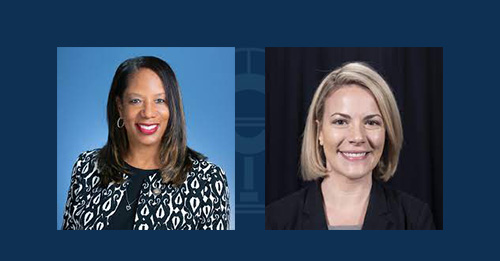 Gerlda B. Hines, State Accounting Officer and Candice Broce, Commissioner of the Department of Human Services & Director of the Division of Family and Children Services.

Governor Brian P. Kemp administered the oath of office to Gerlda B. Hines to serve as State Accounting Officer and Candice Broce to serve as Commissioner of the Department of Human Services. Commissioner Broce will also serve as Director of the Division of Family and Children Services.

“I am proud to appoint Gerlda B. Hines to serve as our new State Accounting Officer,” said Governor Kemp. “She has a wealth of experience and is a respected, valued leader in state government. I am confident she will continue to maintain the long-standing tradition of conservative fiscal management that enables Georgia’s AAA bonding and status as the top state for business.”

“Candice Broce is a great fit to lead the Department of Human Services and the Division of Family and Children Services,” said Governor Kemp. “Given her experience serving in numerous leadership roles in my administration and her demonstrated commitment to public service, I have no doubt she will continue to make the State of Georgia proud as Commissioner of DHS and Director of DFCS.”

Before coming to DHS, Hines was the Deputy Chief Financial Officer for the Georgia Department of Community Health, where she was responsible for a $13 billion budget, from 2013 – 2015. She also served as the Vice President and Chief Financial Officer for the Georgia Student Finance Commission, the Budget Manager for the Georgia Regional Transportation Authority and a Policy Analyst for the Georgia Governor’s Office of Planning & Budget. Hines graduated from Loyola University in New Orleans with a Bachelor of Business Administration in Accounting and is a Certified Public Accountant. She is a member of the Government Finance Officers Association, Georgia Fiscal Management Council and Leadership Cobb Alumni Association. Hines lives in Marietta and has one son.

Candice Broce serves as Commissioner of the Department of Human Services, as well as Director of Division of Family and Children Services (DFCS). Broce most recently served as Interim Director for DFCS, as well as Chief Operating Officer. She formerly served as Communications Director and Chief Deputy Executive Counsel for Governor Kemp, and she previously managed communications and served as legal counsel for elections and legislative affairs at the Georgia Secretary of State’s Office. Broce holds a bachelor’s degree in Management from the Georgia Institute of Technology and a law degree from Georgia State University College of Law. Originally from Cartersville in Bartow County, she now lives in White, Georgia with her husband, Jason, and two sons, Beau and Jack. She is a member of the State Bar of Georgia, Federalist Society, Republican National Lawyers Association, and Georgia Board of Nursing.