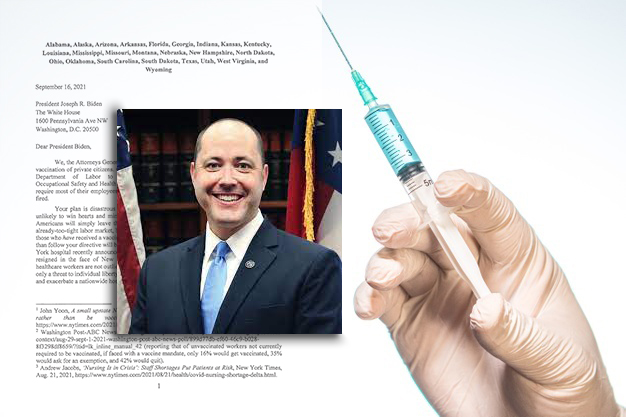 In a letter to President Joe Biden, Attorney General Chris Carr, along with 23 other state attorneys general, voiced opposition to the announcement that the Department of Labor, under the Occupational Safety and Health Act (“OSHA”) will mandate that most private sector employees would be required by their employer to get a COVID-19 shot, submit to weekly testing, or be fired.

“In yet another example of blatant disregard for the rule of law, the Biden-Harris Administration’s command-and-control strategy is condescending and counterproductive, harmful to our state’s economy, and – most importantly – unconstitutional,” said Attorney General Chris Carr. “We will fight back against the Administration’s abuse of power and will protect the citizens and businesses in our state.”

In the letter, the attorneys general express that the plan is unlikely to hold up in court and will simply drive further skepticism regarding vaccinations. The letter argues that Americans will simply leave the job market instead of complying which will further strain an already-too-tight labor market, burdening companies and threatening jobs. The letter further points out that the states are already seeing the reaction to vaccine mandates by some essential frontline healthcare workers putting more pressure on the healthcare system.


The group says that Courts expect Congress to speak clearly when authorizing an agency to exercise powers. The law does not clearly empower the Department to regulate private health decisions made outside of work.