A pro-life organization in Georgia has launched a petition focused on raising awareness about vaccine ingredients and working to combat the use of any COVID-19 vaccines which may contain ‘parts obtained from an aborted child.’
So far, the group has collected 409 of the 5,000 desired signatures. 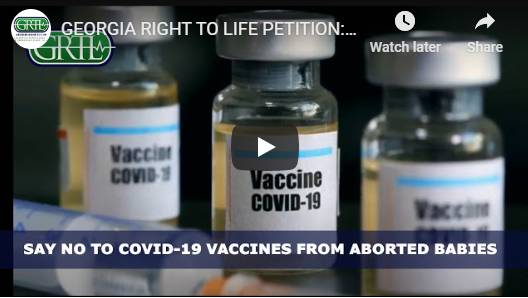 A pro-life organization in Georgia has launched a petition focused on raising awareness about vaccine ingredients and working to combat the use of any COVID-19 vaccines which may contain ‘parts obtained from an aborted child.’

Georgia Right to Life (GRTL) launched a petition campaign last week and says the petition is directed at President Donald Trump and Stephen Hahn, Commissioner of the federal Food and Drug Administration.

The top of the petition reads “Are you aware that as part of the Trump administration’s goal to secure 300 million COVID vaccine doses as early as this fall, several of the vaccines being developed use aborted baby body parts? In fact, one of the vaccines received $1.2 billion in U.S. aid for development.”

As of June 13th, the petition had 409 signatures, including former Congressman Paul Broun and State Represenative Philip Singleton.

In a news release, the organization said:

“GRTL strongly supports finding a vaccine that protects people from contracting this deadly disease,” GRTL President Ricardo Davis said. “At the same time, we need to protect the rights of millions of pro-Personhood advocates who will have a serious problem taking a vaccine that exploited the brutal death of a child.”

Davis added: “There are several vaccines being developed that are not abortion tainted. I encourage our officials to approve any of those that prove effective.”

The campaign comes on the heels of a recent announcement that the U.S. has pledged $1.2 billion to accelerate advancement of a vaccine being pursued in the United Kingdom. A portion of that process includes using a cell line obtained from an aborted child.

Following that, it was revealed that a U.S. company is conducting a promising trial of a vaccine in Australia that does not use a fetal cell line.

“Clearly there is an excellent chance Operation Warp Speed will be able to offer people an ethically-sourced vaccine,” Davis said. “We need to hold officials accountable to ensure that happens, as well as publicizing it.”

I encourage everyone who values the sanctity of human life to sign our petition. COVID-19 is already a tragedy for hundreds of Georgians. We don’t need to make it even a larger one,” Davis concluded.