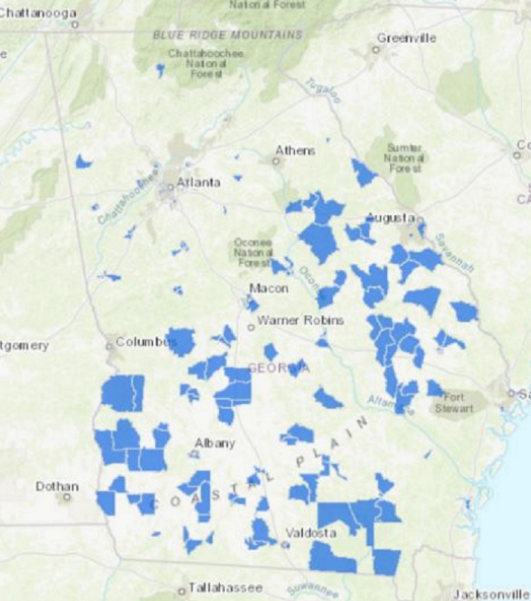 Gov. Nathan Deal announced Monday that the U.S. Department of the Treasury and the Internal Revenue Service (IRS) have approved all of Georgia’s nominations for Qualified Opportunity Zones. The Qualified Opportunity Zone distinction was created by The Tax Cuts and Jobs Act to spur economic growth in low-income communities by allowing investors to defer federal taxes by taking capital gains from other investments and investing in these designated areas.

“In Georgia, we have seen firsthand the value of adhering to conservative principles and creating a business-friendly environment to promote economic development,” said Deal. “By attracting more private investment to underserved areas, the tax incentives for Qualified Opportunity Zones will further encourage businesses to invest in the communities that need it most, while also creating meaningful employment opportunities across the state. The areas we nominated for this distinction include both rural and urban communities that experienced a slower economic recovery in the last few years, and these tax incentives represent another step forward in their economic revitalization. We look forward to working with the Department of the Treasury, the IRS and the private sector to take full advantage of this program and boost economic growth for Georgia’s economically disadvantaged areas.”

Georgia submitted 260 nominations from 83 counties, comprising 60 percent rural communities and 40 percent urban communities, ahead of the March 21 deadline and all were approved by the Department of the Treasury. Qualified Opportunity Zones are intended to facilitate investment in areas where poverty rates are greater than 20 percent. The program will be administered by the Georgia Department of Community Affairs (DCA).

“This designation will enable some of our state’s struggling communities to attract much-needed private sector investment,” said DCA Commissioner Christopher Nunn. “By giving an economic ‘shot in the arm’ to these communities, our goal is to boost investment where it’s most urgently needed.”

The Department of the Treasury and the IRS plan to issue additional information on Qualified Opportunity Funds to address the certification of Opportunity Funds, which are required to have at least 90 percent of fund assets invested in Opportunity Zones. DCA will communicate additional details on the program as they are released.

A map of Georgia’s designated Qualified Opportunity Zones is attached, and an interactive map with additional information is available here.