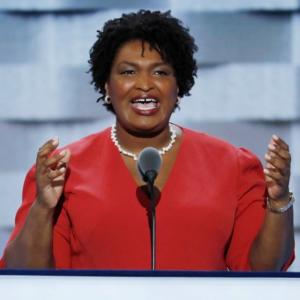 Weighing in on the Kavanaugh nomination Friday, Abrams said in an emaiil:

I believed her last week, I believed her yesterday, and I will continue to believe and to support survivors of sexual assault.
This isn’t about politics – it is about doing what is right. It is about removing the stigma of reporting. It’s about working to build a system where no survivor is bullied into silence or afraid to seek justice.
Instead of demanding survivors prove and relive their trauma – as Dr. Blasey Ford was forced to do on a national stage yesterday, as survivors are forced to do on college campuses and in workplaces and homes across our country every day – we must demand leaders who will work to build a culture of consent and of accountability.
Until then, we are all guilty of continuing a vicious cycle of assault, silence, and shame. We are guilty of punishing survivors instead of perpetrators.
Survivors deserve better. They deserve to be supported and heard.
That’s why I stand with Dr. Christine Blasey Ford – yesterday, today, and always.
In solidarity,
Stacey Abrams
Related Topics
Jessica Szilagyi