2020 CANDIDATE INSIDER: Jessica Szilagyi chats with Todd Greene who is running for U.S. Senate in Georgia.
His name will appear in the ‘jungle primary’ race alongside 20 other candidates. 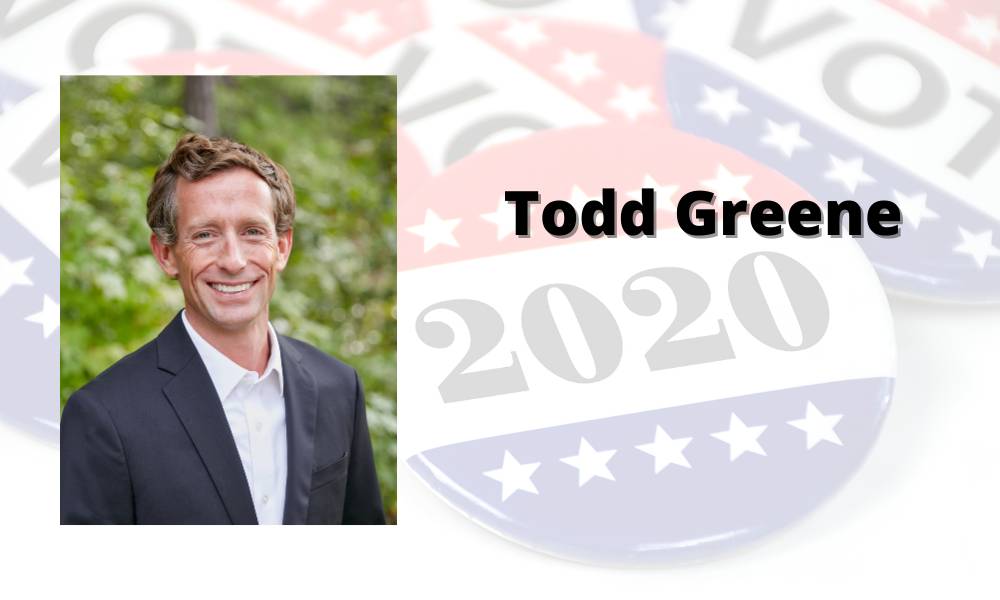 Todd Greene is running for United States Senate because he wants to see hope to return to America and glory to return to homes.

“We all have different version of what that looks like,” he said in an interview with AllOnGeorgia. Different indeed. On his campaign website, Greene says, “

And, yes, I am voting Trump.

But there is more to Greene than his 30-second elevator speech he offers to voters scouring the internet to learn more about the nearly two dozen candidates in the crowded jungle primary race.

Who is Todd Greene?

Before COVID-19 changed the normal way of life, Greene spent 12 years teaching business studies economics in the U.S., Qatar, and Taiwan and he’s not stranger to education himself, having earned three degrees at the University of Georgia and recently completing his Doctorate at Regent University. All of those experiences, he says, have been instrumental in formulating his political ideas into what they are now. He says there are some major macroeconomic issues that need attention now that are keeping the country from operating equally for everyone, particularly related to the tax code.

Greene is running as an Independent, though he was raised in a very conservative, Christian family. His political ideology has morphed and evolved over the years with new experiences and new interactions with diverse people.

“As a gay Christian, I used to attend anti-abortion pickets with my family and I thought that was righteous. But as I learned, it isn’t about what applies to Christians, it’s about inalienable rights that apply to everyone. It’s ironic that the very right that I was protesting when I was 13 because it’s the very same right that I’m commending now because it’s the same right that Christians need to worship freely – inalienable rights of our Constitution,” Greene said in his interview.

Now he is running as an Independent because he has a blended ideology. “A Republican would never want to hear what I have to say, a Democrat would like some of it, but as a gay Christian, that might be a deterrent, so my perspective is not really with anyone 100%,” Greene said, before conceding that he aligns with the heartfelt component of more liberal platforms. Evaluating each issue on a case-by-case basis is how he would approach each matter on which he would have cast a vote.

He also said he is a strong supporter of reparations and a healing of the economic system. ‘I don’t want to put slavery in the past because you can never really forget a tragedy like that, but we need to move forward.’

Among some of the other initiatives Greene supports:

SCOTUS Appointment: Greene said he wouldn’t act if he was the President. “I would have confidence that I’m going to win and not rush anything.’ I’d assert that ‘we’ve got this’, but tell my constituents we don’t have to rush, we are going to get this done.’ the immediacy is alarming and haste makes waste and we need to make sure that we aren’t overtly stepping on people.”

Riots & Civil Unrest: The riots are unnerving for a number of reasons, Greene says. He would light up the areas where protests are taking place. “We’ve got to do this in the light. The darkness that these riots are happening in is crippling us. I would feed you, I would give you beer, I don’t care, but I’ve got to have light. I could go out there as a pastor and mean nothing. I could go out there as a citizen and mean nothing. But not one Senator went out there. Not one person with authority, with ability, went out there with an olive branch. The world is looking for the person who can roll sleeves up, if that’s what it takes.”

Personal Income Tax Liability: Greene supports making a personal income tax threshold. 22% of Americans filed income tax returns with zero tax liability. He says the portion of the top 1% of earners filing no tax liability means $500 to $600 billion in taxes annually are not being paid when they should be. “The only people who are spending right now are those with 0% tax liability. No more. Everyone will pay something. I’m not going to promise I won’t raise your taxes. That’s a foolish thing to say.” Greene said he would support moving to a corporate tax as the only means of taxation but not until the $30 trillion in debt is paid off first.

Discrimination Law: Greene believes same-sex couples should be covered under Ttitle 7 and not doing so shows a lack of love and grace that ultimately holds back the country from growth.

Even with a well-articulated platform, Greene has a unique approach to campaigning. His father, Michael Greene, ran against Roy Barnes in a State House race in 1996. Though he is no stranger to the traditional campaigning practices, Greene has pledged not to spend $1 on the race for U.S. Senate.

‘I’m not going anywhere, If someone wants to talk to me, like a reporter for example, they can talk to me. I never intended to run to win, but I never intend not to run again. I will run for the rest of my life. But money’s not the reason I will run, the lack of it or the abundance of it, but because it’s what is in my heart.’

When I find out that people are spending $23 million, that’s just disgusting. It’s appalling to me. What’s ironic to me is that the very people who support campaign finance reform are the same ones selling slots for the air time. It’s absolutely flawed. We’re being led by social media and led by the dollar.”

Greene said the purpose of a U.S. Senator is to educate with purpose and to prepare people for change. “I am a visionary. I have no desire to self-aggrandize. But I can move forward with principle and I can put my name on the ballot.”

How can you learn more about Todd Greene?