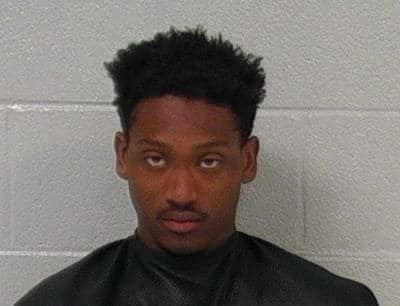 Both Officer Chase Gordy  & Sergeant Rob Holloway remain in the hospital.  Officer Gordy is expected to be released from the hospital today.

An autopsy for Pier Shelton will be performed by a GBI Medical Examiner.  The autopsy has not been scheduled yet.

Agents are still working to confirm which Shelton was in the passenger seat shooting at officers. The rifle used was an AK47.

The deceased has been identified as Pier Alexander Shelton, age 28, of Birmingham, AL.

GBI is releasing the name of the offender taken into custody this morning who was involved in the incident regarding a high speed chase that lead to shots fired by the suspects injuring multiple officers. He has been identified as 22 year old Aaron Shelton of Alabama and he is being charged currently with 3 counts of Aggravated Battery and 5 counts of Aggravated Assault.

His brother, who was killed at the scene, is identified as 28 year old Pier Shelton of Alabama.

FYI: to add clarity, the charges listed are the INITIAL charges at the moment, this is still an active investigation and further charges could occur and there will be an indictment phase as well. These are preliminary charges only.

The Georgia Bureau of Investigation was requested by the Carrollton Police Department and the Georgia State Patrol at approximately 5:00 a.m. this morning to investigate an officer involved shooting.

Preliminary information indicates that at approximately 3:34 A.M., a Georgia State Patrol Trooper initiated a traffic stop on a 2015 Nissan Sentra for speeding at mile marker 10 eastbound on Interstate 20 in Bremen, Georgia. As the trooper approached the rear of the Nissan Sentra, the driver sped off.  The trooper engaged in a vehicle pursuit and was able to perform a precision immobilizing technique (PIT) to stop the Nissan Sentra. The driver of the vehicle was able to gain control and proceed. The trooper attempted to initiate a second PIT maneuver when the passenger of the Nissan Sentra leaned out of the front passenger window and began firing at the trooper with a rifle.  The trooper’s patrol car was struck and disabled.

The pursuit continued at a high rate of speed until the Nissan Sentra crashed near Ithica Elementary School in Villa Rica.  Both men ran from the vehicle, resulting in a search for them.  At approximately 5:00 A.M. and 5:30 A.M., the men shot towards officers and Villa Rica Police Officer Chase Gordy returned shots and was shot twice. Carroll County Sheriff’s Deputy John Repetto was also shot at and sustained a gunshot injury.

One man was shot by officers and died on scene while the other man was taken into custody. He is being held at the Carroll County Jail.

Sergeant Holloway and Officer Gordy were transported to Grady Hospital in Atlanta for their injuries while Deputy Repetto was transported, treated and released from Atlanta Medical Center.

The GBI will continue its independent investigation of the officer involved shooting.  Once complete, the case file will be submitted to the District Attorney’s Office for review.  The GBI is also investigating the aggravated assault on the police officers.