This year La Niña returns for the third consecutive winter, driving warmer-than-average temperatures for the Southwest and along the Gulf Coast and eastern seaboard, according to NOAA’s U.S. Winter Outlook released today by the Climate Prediction Center — a division of the National Weather Service. Starting in December 2022 through February 2023, NOAA predicts drier-than-average conditions across the South with wetter-than-average conditions for areas of the Ohio Valley, Great Lakes, northern Rockies and Pacific Northwest.

“The hardworking forecasters at NOAA’s Climate Prediction Center produce timely and accurate seasonal outlooks and short-term forecasts year-round,” said Michael Farrar, Ph.D., director of the National Centers for Environmental Prediction. “NOAA’s new supercomputers are enabling us to develop even better, more detailed forecast capabilities, which we’ll be rolling out in the coming years.”

NOAA forecasters, in collaboration with the National Integrated Drought Information System (NIDIS), continue to monitor extreme, ongoing drought conditions that have persisted in the Western U.S. since late 2020, as well as parts of the central U.S. where historic low-water conditions are currently present.

“Drought conditions are now present across approximately 59% of the country, but parts of the Western U.S and southern Great Plains will continue to be the hardest hit this winter,” said Jon Gottschalck, chief, Operational Prediction Branch, NOAA’s Climate Prediction Center. “With the La Niña climate pattern still in place, drought conditions may also expand to the Gulf Coast.” 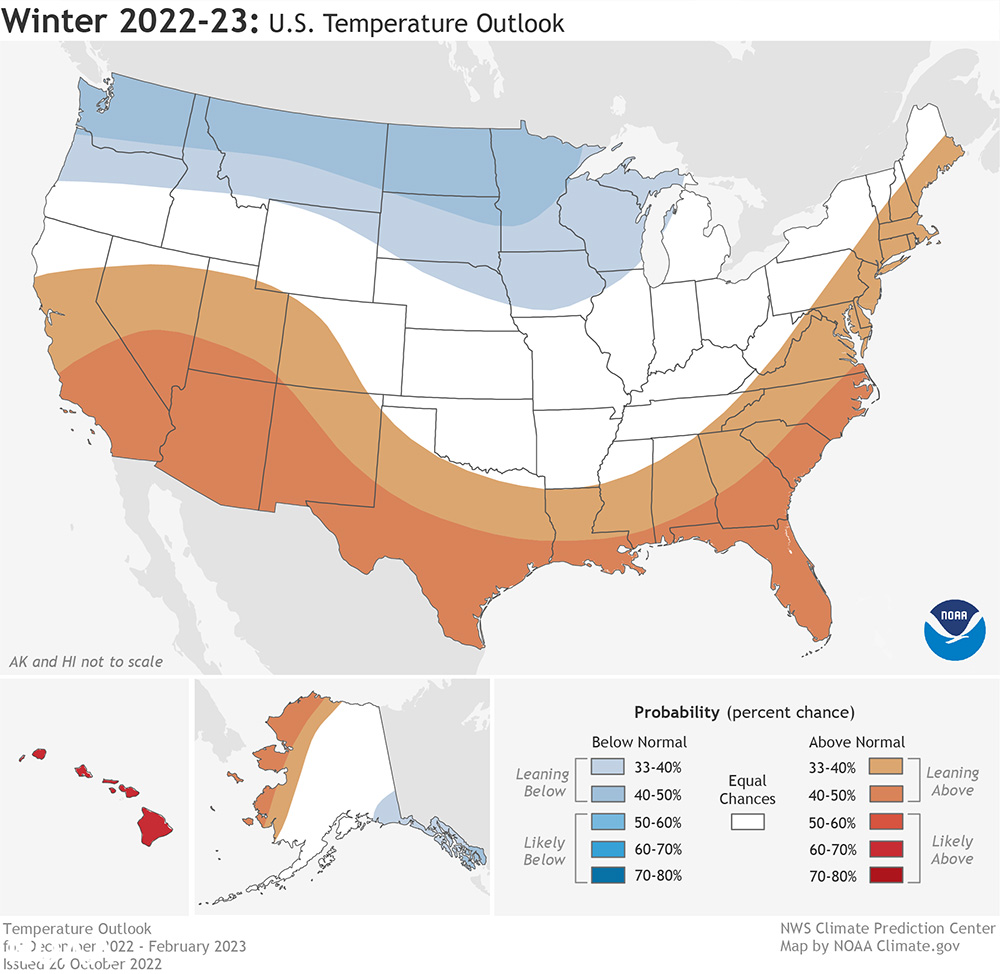 The U.S. Winter Outlook 2022-2023 map for temperature shows the greatest chances for warmer-than-average conditions in western Alaska, and the Central Great Basin and Southwest extending through the Southern Plains. Below normal temperatures are favored from the Pacific Northwest eastward to the western Great Lakes and the Alaska Panhandle. (NOAA) 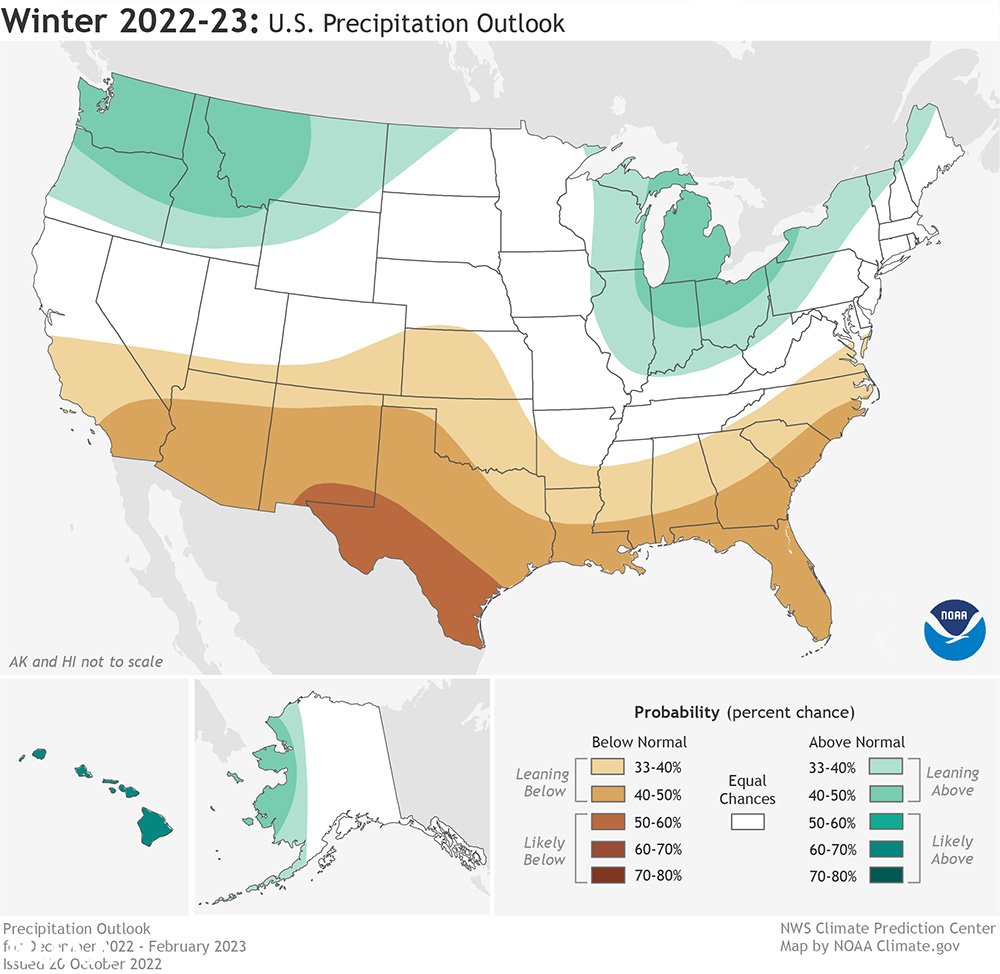 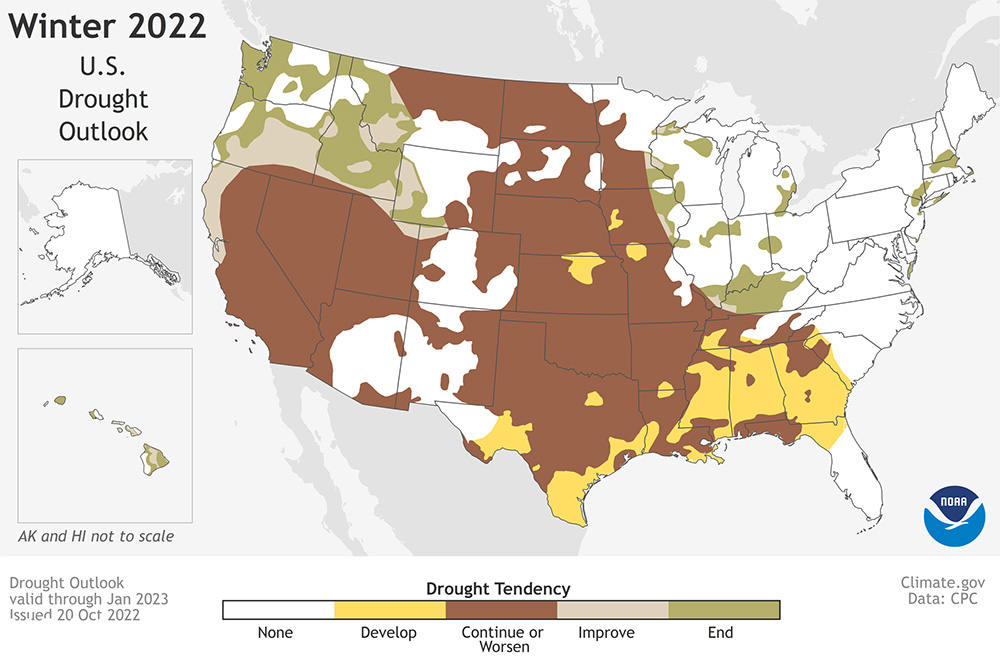 This seasonal U.S. Drought Outlook map for November 2022 through January 2023 predicts persistent widespread drought across much of the West, the Great Basin, and the central-to-southern Great Plains. (NOAA)

NOAA’s seasonal outlooks provide the likelihood that temperatures and total precipitation amounts will be above-, near- or below-average, and how drought conditions are anticipated to change in the months ahead. The outlook does not project seasonal snowfall accumulations as snow forecasts are generally not predictable more than a week in advance.

NOAA’s Climate Prediction Center updates the three-month outlook each month. The next update will be available November 17.

Seasonal outlooks help communities prepare for what is likely to come in the months ahead and minimize weather’s impacts on lives and livelihoods. Resources such as drought.gov and climate.gov provide comprehensive tools to better understand and plan for climate-driven hazards. Empowering people with actionable forecasts, seasonal predictions and winter weather safety tips is key to NOAA’s effort to build a more Weather– and Climate-Ready Nation.