While DUI-related fatalities have declined in recent years, preventable fatal accidents involving alcohol still remain a problem in all corners of the nation. We take a look at which states have it worst in this week’s #MapMonday –> 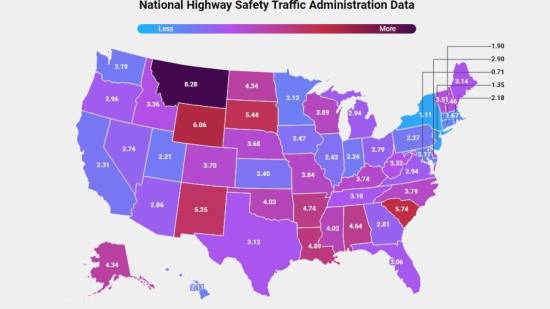 Statistics show that between 1991 and 2017, the rate of drunk driving fatalities per 100,000 people decreased by nearly 50% and for drivers 21 and younger, that rate decreased by 68%. Even still, preventable fatal accidents involving alcohol still remain a problem in all corners of the nation.

But which states have the worst statistics?

Analysts with Butler Wooten Peak recently analyzed fatal crash records of more than 34,000 wrecks using data from the National Highway Transportation Safety Administration for the 2018 year – the most recent year with data available. After narrowing those wrecks based on whether or not alcohol was a factor, the group found that nearly 25% of all fatal crashes in 2018 involved the use of alcohol.

It’s also worth noting that, in 2017, nearly 2,000 people died in alcohol-related traffic accidents in which the driver was less-impaired than the established blood-alcohol content limit.

Montana, Wyoming, and South Carolina ranked as the worst of the worst when considering rates per 100,000.

The District of Columbia is at the bottom, with just 0.77 fatalities per 100,000, followed by New York with a 1.11 rate, likely in large part to the use of public transportation, taxi services, and ridesharing.

Among the findings, the report found:

The map below compares drunk driving fatality rates per 100,000 people in the population for each state in the United States and the District of Columbia, ranking them from highest to lowest.

With the interactive map, you can hover over any state to see the corresponding drunk driving fatality rate, along with its current ranking from 1-51 (1 being the highest (worst) fatality rate and 51 being the lowest (best) rate).