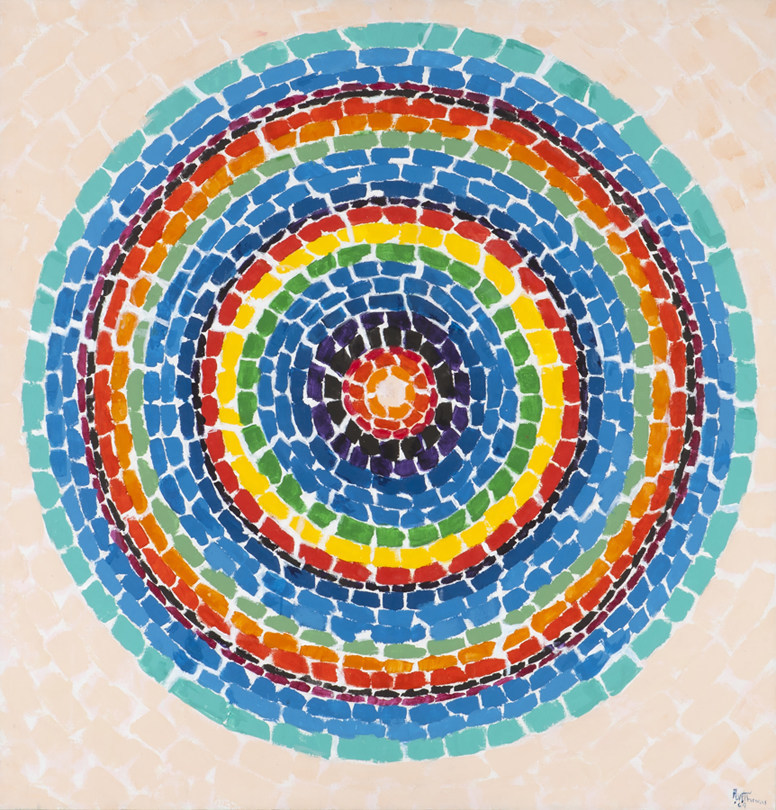 The Frist Art Museum presents Alma W. Thomas: Everything Is Beautiful, a comprehensive overview of the artist’s long, dynamic life (1891–1978) and multifaceted career that was defined by constant creativity. Featuring more than 150 works, including her joyful and colorful abstract paintings and many objects that have never been exhibited or published before, the exhibition demonstrates how Thomas’s artistic practices extended to every aspect of her life—from community service and teaching to gardening and dress. Co-organized by the Chrysler Museum of Art and The Columbus Museum, Georgia, Everything Is Beautiful will be on view at the Frist’s from February 25 through June 5, 2022.

This retrospective follows the trailblazing artist’s journey from Columbus, Georgia, to Washington, DC, to becoming the first Black woman to have a solo show at New York’s Whitney Museum of American Art in 1972, when she was eighty years old. It includes thirty-eight canvases spanning 1922–77, more than sixty works on paper, four marionettes, and a range of sculptures, photographs, and ephemera. “The Columbus Museum collection includes an extraordinary body of material related to Thomas, thanks to gifts from her family, particularly her sister John Maurice Thomas,” said Jonathan Frederick Walz, PhD, director of curatorial affairs and curator of American art at The Columbus Museum. “Many of these works have not been seen outside of Georgia.”

“Everything Is Beautiful not only provides a more complex understanding of Alma Thomas, but also offers an inspiring example of how to lead a creative life today,” says Seth Feman, PhD, one of the exhibition’s curators and the Chrysler’s deputy director for art and interpretation and curator of photography. He notes that, while Thomas has been long adored by collectors and scholars, her talent remained unfamiliar to a wider public for more than three decades after her death until 2009, when President Barack Obama and First Lady Michelle Obama included her work among the paintings they installed at the White House.

The exhibition explores Thomas’s relationship to the Washington Color School, the creative communities connected to Howard University, and peers who protested museums that failed to exhibit artists of color. “Throughout her career, the art departments and galleries of historically Black colleges and universities provided Thomas with vital support,” says Frist Art Museum senior curator Trinita Kennedy. “Her closest connections were with Howard University, her alma mater, and the place where she debuted her abstract style—what she called ‘Alma stripes’—in 1966. That exhibition marked the beginning of her meteoric rise in the art world.”

Moving through the galleries, guests will encounter the archetypal spaces where Thomas expressed her creativity, including the studio, the garden, the theater, community sites such as schools and churches, universities, and the art scene that extended from Washington, DC, to New York and beyond through the Art in Embassies Program. Thomas’s presence will also be invoked through recreations of her distinctive dresses with bold, geometric patterns, a new documentary about her life and career, and the music she listened to while she painted.

The Frist is one of four museums presenting this tribute to Thomas. “Here in Nashville, special attention will be given to Thomas’s 1971 exhibition organized by David C. Driskell at Fisk University’s Carl Van Vechten Art Gallery,” says Kennedy. “It was Driskell who brought Thomas to the attention of the Whitney Museum, and the two shows have much in common.” Everything Is Beautiful begins with a partial restaging of the 1972 Whitney show, including a recreation of the dress Thomas commissioned to complement her art and wore to the opening.

The success of Thomas’s final, remarkable years tends to overshadow her previous decades of devotion to various local organizations, her diverse creative interests, and how she viewed the natural world as an enduring source of inspiration. “Thomas achieved artworld stardom but considered teaching art to be her greatest legacy,” says Kennedy. The Frist will highlight Thomas’s thirty-five-year tenure at Shaw Junior High in Washington, DC, by presenting a concurrent exhibition titled Nashville Art Teachers: Beyond the Classroom that salutes the extraordinary art teachers in our own community and their heroic efforts during the challenging circumstances of the COVID-19 pandemic. It features the work of elementary, middle, and high school art teachers working in Davidson County and will be on view in the Conte Community Arts Gallery from March 4 through August 28, 2022.

Co-organized by the Chrysler Museum of Art and The Columbus Museum, Georgia

Aflac is proud to sponsor Alma W. Thomas: Everything Is Beautiful. The exhibition has also been made possible in part by major support from the Henry Luce Foundation, the Andy Warhol Foundation for the Visual Arts, and the National Endowment for the Arts.

Supported in part by Ameriprise Financial.

About the Frist Art MuseumAccredited by the American Alliance of Museums, the Frist Art Museum is a 501(c)(3) nonprofit art exhibition center dedicated to presenting and originating high-quality exhibitions with related educational programs and community outreach activities. Located at 919 Broadway in downtown Nashville, Tenn., the Frist Art Museum offers the finest visual art from local, regional, national, and international sources in exhibitions that inspire people through art to look at their world in new ways. Information on accessibility can be found at FristArtMuseum.org/accessibility. Gallery admission is free for visitors ages 18 and younger and for members, and $15 for adults. For current hours and additional information, visit FristArtMuseum.org or call 615.244.3340.