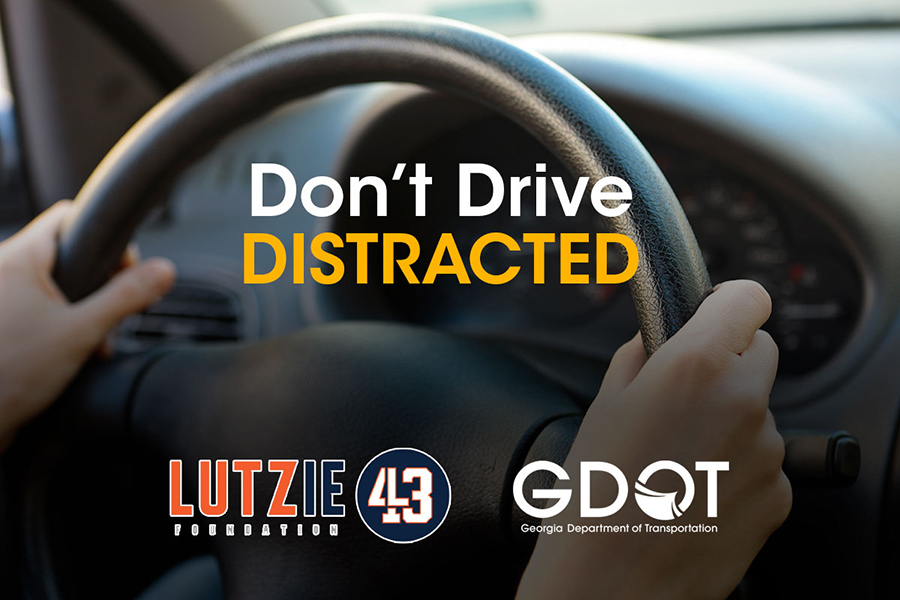 The Lutzie 43 Foundation and Georgia Department of Transportation (GDOT) have agreed upon a two year partnership that will launch ahead of holiday travel.

The partnership will promote the Lutzie 43 Foundation’s 43 Key Seconds safe driving initiative and the Georgia Department of Transportation’s Drive Alert Arrive Alive campaign in an effort to reduce the number of crashes and fatalities in Georgia caused by unsafe driving such as distracted and impaired driving, speeding and not wearing a seatbelt.

The partnership will include a comprehensive communications plan, new Safe Driving Summit events and the distribution of the Lutzie 43 Foundation’s 43 Key Seconds keys through GDOT’s HERO and CHAMP programs.

“We are looking forward to working with the Lutzie 43 Foundation to make the roadways in Georgia safer,” said GDOT Commissioner Russell McMurry. “The Lutzie 43 Foundation is an independent organization created to help reduce the number of distracted driving incidents through its 43 Key Seconds safe driving initiative, ultimately diminishing the number of deaths caused by unsafe driving, and is very much in line with GDOT’s Drive Alert Arrive Alive Campaign. Together, these driver safety focused initiatives can make an impact on driver behavior making roads in Georgia safer.”

The Lutzie 43 Foundation was founded after former Auburn football player, Philip Lutzenkirchen, passed away in 2014 as a passenger in a distracted and impaired driving accident in LaGrange, Georgia. Philip decided to get into a vehicle with someone who had been drinking and was not wearing a seatbelt. When the vehicle rolled through a stop sign well over the posted speed limit, the vehicle crashed. Philip was thrown 15 feet from the vehicle’s final resting place.

Since 2014, the Lutzie 43 Foundation, led by Philip’s father, Mike Lutzenkirchen, has been on a mission to prevent what happened to Philip from happening to other drivers and end distracted and impaired driving. The foundation accomplishes its mission through the 43 Key Seconds safe driving initiative. This initiative was created to make the first nationally-recognized symbol for distracted and impaired driving.

The physical 43 Key Seconds key serves as a safe driving tool for all drivers. By keeping the 43 Key Seconds key on a keychain or somewhere visible in their car, drivers are triggered to take 43 seconds to ensure they have a clear head, clear hands, clear eyes and click their seatbelt before starting the car.

The Lutzie 43 Foundation and GDOT will distribute the 43 Key Seconds keys through the HERO and CHAMP programs across the state. In addition to the distribution of the keys, the two organizations will host several Safe Driving Summits across the state. These summits allow drivers to hear Philip’s story and hear from other professionals about the dangers of distracted and impaired driving.

“We are thrilled to be partnering with GDOT to share our 43 Key Seconds safe driving initiative and work together to make our roads safe,” said Mike Lutzenkirchen, executive director of the Lutzie 43 Foundation. “Through the Safe Driving Summits, paid marketing campaigns and distribution of the 43 Key Seconds keys through the HERO and CHAMP programs, we believe that at the end of this partnership, we will have made a difference not only on the roads, but in the lives of drivers across the state.”

For more information about the partnership, the Lutzie 43 Foundation or GDOT, please email Katie Stotts, stotts@knighteady.com.

ABOUT LUTZIE 43 FOUNDATION:
The Lutzie 43 Foundation aims to encourage and empower all drivers to be positive ambassadors for safe driving through character development, mentorship and real-world application. The Lutzie 43 Foundation was established in loving memory of former Auburn football player Philip Lutzenkirchen, shortly after he lost his life in a car accident in 2014. In his memory, the foundation’s 43 Key Seconds safe driving initiative aims to create the first nationally-recognized symbol for distracted and impaired driving awareness and prevention. The foundation’s motto for youth is to “Live like Lutz, Love like Lutz, and Learn from Lutz,” reflecting its desire to help others live out the many positive character attributes that Philip displayed while learning from the circumstances that led to his death. For more information, visit lutzie43.org.

ABOUT THE GEORGIA DEPARTMENT OF TRANSPORTATION:
Georgia Department of Transportation plans, constructs and maintains Georgia’s state and federal highways. We’re involved in bridge, waterway, public transit, rail, general aviation, bike and pedestrian programs. And we help local governments maintain their roads. Georgia DOT and its nearly 4,000 employees are committed to delivering a transportation system focused on innovation, safety, sustainability and mobility. The Department’s vision is to boost Georgia’s competitiveness through leadership in transportation.

ABOUT DRIVE ALERT, ARRIVE ALIVE CAMPAIGN:
The Drive Alert Arrive Alive campaign seeks to change dangerous driving behaviors. The program focuses on educating Georgia drivers about simple changes they can make to save lives: buckle up, stay off the phone and drive alert. Through Georgia DOT’s partnership with the Governor’s Office of Highway Safety (GOHS) and the Georgia Department of Public Safety, the campaign helped reduce fatalities in Calendar Year (CY) 2019 by one percent.