Kemp announced the latest progress in combating COVID-19, said the peak date is set for April 26th according to the models, and announced additional people would soon be eligible to get tested.

“We don’t want people showing up unannounced to a hospital or medical facility for a test. You need to contact your local health department to arrange for a test,” Kemp said. 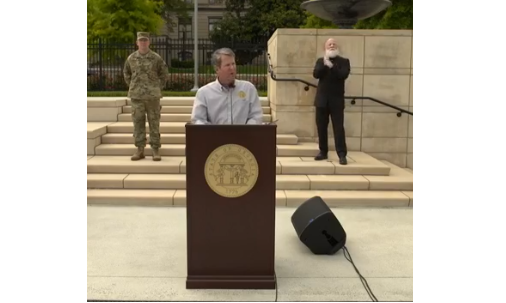 Kemp began Monday’s press conference with an overview of the storm damage across Georgia from Sunday night and early Monday morning. “It looked like a bomb went off in two different neighborhoods I visited [in Murray County] and they’re already suffering from the impacts of COVID-19,” Kemp said. As seven Georgians lost their lives, Kemp said the state of emergency was declared to allocate additional resources for those in need in a number of counties through state agencies.

As he moved into the COVID-19 update, Kemp announced that as of noon on Monday, April 13th, 13,315 cases were confirmed in the state in 157 of 159 counties with 464 fatalities. More than 56,000 tests have been completed, but Kemp said the testing continues to lag. “The status quo is not acceptable,” Kemp said. “Dr. Toomey has instructed public officials at the county levels this morning to expand testing sites around the state.” Additionally, the state is going to expand who can be tested.

Symptomatic critical infrastructure employees and asymptomatic individuals who have had direct conduct with positive persons, including family  members will be included in the testing population – expanded from first responders and front line health care workers. Toomey said they may have made it too difficult to get tested at first, requiring referrals from a doctor’s office.

“We don’t want people showing up unannounced to a hospital or medical facility for a test. You need to contact your local health department to arrange for a test,” Kemp said.

Progress made highlighted by Kemp:

“In this battle, we have seen businesses, institutions, and Georgians from every corner go above and beyond to lend a hand,” Kemp said.

Kemp also thanked the faith community for finding new ways to worship during the most sacred time of year to ensure health and safety of fellow Georgians. “It was a great reminder that even though we must be apart, we can still come together and worship.”

When asked when Georgia would be considering ‘opening up’ and returning to work, Kemp said Georgia isn’t there yet. “We’re focusing on the hospitals. We’re behind the curve for when our peak is going to be, too. We are focused on the surge capacity, ramping up the testing, and making sure we are taking care of Georgians whose lives were ripped apart in the storms last night.”