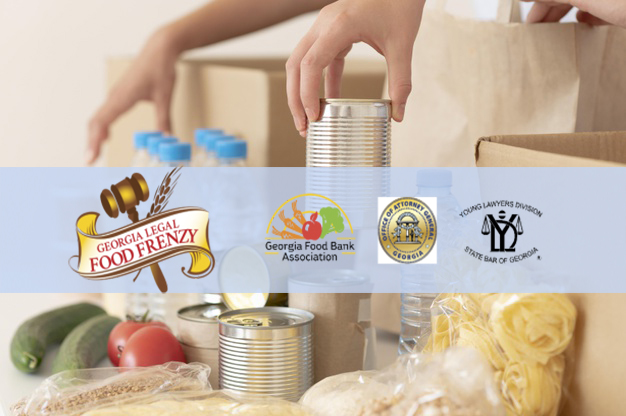 Attorney General Chris Carr this week announced that attorneys across Georgia raised a record-breaking 936,883 dollars for the state’s regional food banks in only two weeks during the 10th Annual Georgia Legal Food Frenzy fundraising competition. This is the equivalent of 3,747,532 meals that the food  banks can distribute to feed hungry kids, seniors, and families in local Georgia communities.

Georgia’s food banks have been responding to a sustained increase in demand since the onset of the coronavirus pandemic while the number of Georgians struggling to keep food on the table has soared. Intensified efforts to get food to families has expanded the scale of food bank operations, and the need is expected to persist as economic recovery progresses.

“The Georgia Department of Law is pleased to celebrate a decade of partnership between the legal community and our regional food banks,” said Attorney General Chris Carr. “For ten years, our network has rallied together to do our part to end food insecurity in our own backyard. In 2020, Georgia attorneys ramped up efforts to support the emergency response and helped the food banks to provide 3.3 million meals to our neighbors. This year, we doubled-down to beat last year’s numbers and raised another 3.7 million meals for the food banks. I am incredibly proud of the collective efforts of our community and am thankful to everyone who helps to make this impact possible each year.”

A total of 210 law firms and legal organizations, representing more than 19,000 members of the legal community, competed for the fundraiser’s two grand prize awards: the Attorney General’s Cup awarded to the team with the most points per person and the Bar President’s Award given to the team with the most overall points. Every 1 dollar raised earned teams 4 points in the competition.

“Raising almost a million dollars and more than 3.7 million meals for our food banks in only two weeks is a monumental step in assisting our neighbors fight food insecurity. The efforts of the attorneys across our state will help fill the gap for subsidized school lunches during the summer, and ensure the children of Georgia can go to bed with a full stomach during this summer,” said State Bar of Georgia YLD President Bert Hummel. “I am always blown away by the altruistic spirit of our membership, but this is a truly impressive feat made possible by the generosity of the members of the State Bar of Georgia. This past year has been difficult for everyone including our members, so to have a fundraising effort of this capacity is humbling. I appreciate the efforts of our law schools, firms, lawyers and the Attorney General’s office for the competition’s results. We celebrate with all of the award winners, and look forward to compounding on our success next year.”

Habachy Law, of Atlanta, won the Attorney General’s Cup for the seventh consecutive year, earning 110,481 points per person. The Bar President’s award winner for the second year in a row was Greenberg Traurig, of Atlanta, earning 334,396 total points, the most in the competition’s history. Additional winners were crowned in seven award categories based on organization type and size.

“Our food banks are incredibly grateful for ten years of partnership with Georgia’s legal community. We celebrate their endless generosity and the exponential impact of their support,” said Danah Craft, Executive Director of the Georgia Food Bank Association. “Our network of food banks has been working around the clock for more than a year to ensure that our neighbors don’t have to be worried about where their next meal is coming from. Georgia’s lawyers and legal professionals continue to aid us in our mission to feed more hungry children, seniors, and families. The millions of meals generated by this competition will go a long way in helping the food banks end hunger across our state. Our deepest appreciation goes to the Attorney General’s Office, State Bar, Young Lawyers Division, and every participant for the boundless energy and compassion that drives this historic event.”

Since the fundraiser’s inception in 2012, the Georgia Legal Food Frenzy has provided the equivalent of nearly 17 million meals for food banks.

The annual competition is open to all lawyers in the state of Georgia with special awards categories for solo, small, medium and large-sized firms as well as corporate/in-house counsel, judges and legal organizations. All of the funds collected are donated to the regional food bank that serves each competitor’s respective community.

The Legal Food Frenzy is spearheaded by a team of young lawyers who oversee the promotion of the competition across the state. The 2021 efforts were led by YLD Legal Food Frenzy Co-Chairs Morgan Lyndall and Veronica Rogusky, as well as regional representatives listed at galegalfoodfrenzy.org/leadership. 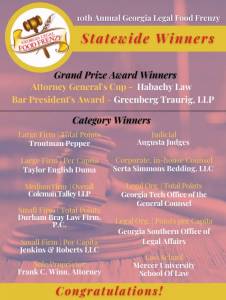