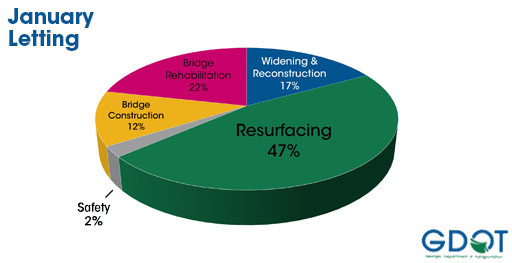 The Georgia Department of Transportation (Georgia DOT) reports that it awarded 25 construction contracts in January of this year for statewide transportation projects totaling $60,038,396.

The largest single investment, worth approximately $9.6 million, was awarded to Plant Improvement Company, Inc to widen and reconstruct 1.44 miles of roadway on State Route 40 from west of Grove Boulevard to Truss Plant Road in Camden County. This project will add additional turn lanes on State Route 40.

This contract, with one other widening and reconstruction contract, represents 17 percent or $10.1 million of the awarded funds.

The remaining 61 percent, or $37 million, is allotted for safety, bridge construction and resurfacing projects at various locations throughout the state. Safety contracts consist of pavement marking upgrades and intersection improvements on various roadways statewide.

A Transportation Investment Act (TIA) project was awarded to The Sikes Brothers, Inc to widen and reconstruct at various locations in Candler, Evans and Tattnall counties. To learn more about TIA visit: http://www.ga-tia.com/.

Award Announcement list (includes rejected and or deferred projects). Bids for Design-Bid-Build projects were received on January 22 and contracts were awarded to the lowest qualified bidders on February 5.