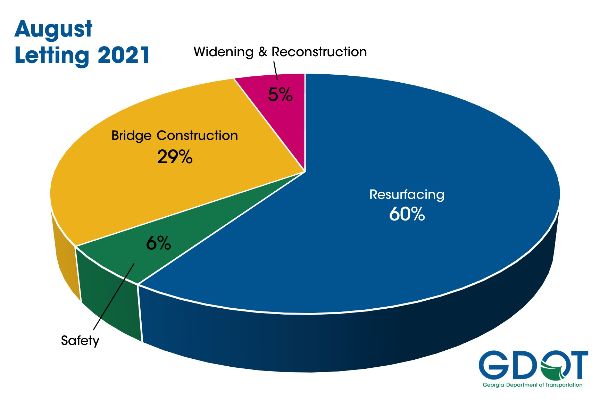 In August 2021, the Georgia Department of Transportation (Georgia DOT) awarded a total of 19 projects valued at approximately $57,115,660.

One project from the August letting, valued at $22,774,948, was deferred and will be awarded at a later date.

The second largest contract is a bridge rehabilitation project worth approximately $10 million. This project was awarded to Massana Construction and will consist of overlay of the bridge decks, joint replacements, edge beam replacements, painting of all beams and bearings, bent caps replacements, spall repair of the Superstructure and Substructures, epoxy injection of the substructures and scour repair at three locations on I-75 on Cobb County and one location on I-75 in Fulton County.

This contract, along with 5 other bridge rehabilitation and replacement contracts, represents 29 percent or approximately $16.7 million of the awarded funds.

Resurfacing projects represent 60 percent, or approximately $34 million, of the awarded funds. The remaining 11 percent is allotted for widening and safety projects at various locations throughout the state. The safety contract includes installation of Dynamic Message Signs and ITS navigation systems at various locations along I-95 in Bryan, Camden, Chatham, Effingham and Glynn counties.

Award Announcement list(includes two rejected projects and one deferred project). Bids for Design-Bid-Build projects were received on August 20 and contracts were awarded to the lowest qualified bidders on September 2. To view a list of lettings by year, please visit: https://www.bidx.com/ga/lettings.


Information on schedules, lane closures and detours will be available in advance of construction activities taking place.