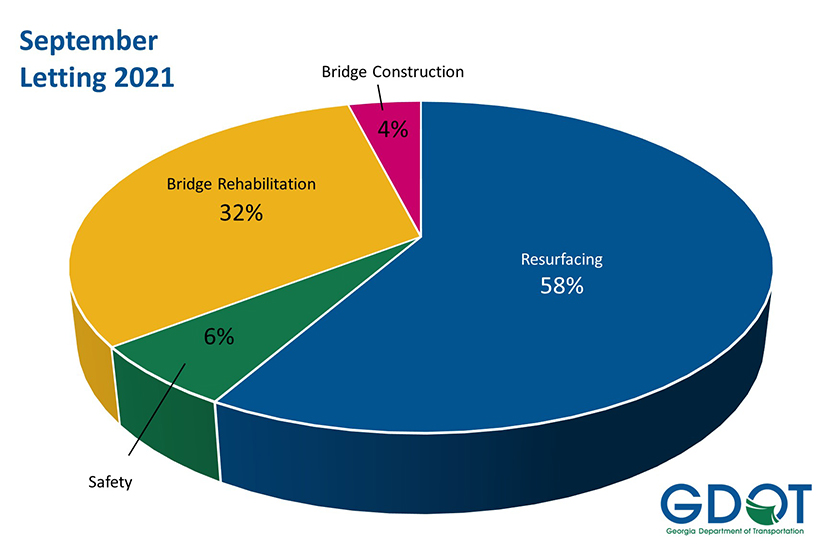 In September 2021, the Georgia Department of Transportation (Georgia DOT) awarded a total of 20 projects valued at approximately $132,592,933.

The largest single investment, worth approximately $8.7 million, was awarded to Seacoast, Inc. This bridge rehabilitation project will consist of an overlay of the bridge deck, joint replacement, spall repair, epoxy injection and pile jacketing at various locations on I-95/SR 405 in McIntosh County.

The second largest contract is a resurfacing project worth approximately $4.56 million. This project was awarded to Baldwin Paving Company, Inc. and will consist of nearly 5.5 miles of milling and plant mix resurfacing on US 10/SR 10 from west of Park Place Boulevard to east of Fountain Drive and from east of Fountain Drive to west of Park Place Boulevard in Gwinnett County.

This contract, along with eight other resurfacing contracts, represents 58 percent, or approximately $24.7 million, of the awarded funds.

Bridge rehabilitation projects represent 32 percent, or approximately $13 million, of the awarded funds. The remaining 10 percent is allotted for safety and bridge construction projects at various locations throughout the state. The bridge construction contract includes 0.24 mile of a bridge and approaches on Old Troin Highway over Dry Creek in Walker County.

A Design-Build project was awarded to Scott Bridge Company/Michael Baker International in the month of September. The project is a replacement of the Houlihan Bridge in Chatham County. To learn more about this project, please visit: http://www.dot.ga.gov/PS/Innovative/DesignBuild.

Award Announcement list (includes rejected and or deferred projects). Bids for Design-Bid-Build projects were received on September 17, and contracts were awarded to the lowest qualified bidders on October 1.

Information on schedules, lane closures and detours will be available in advance of construction activities taking place.