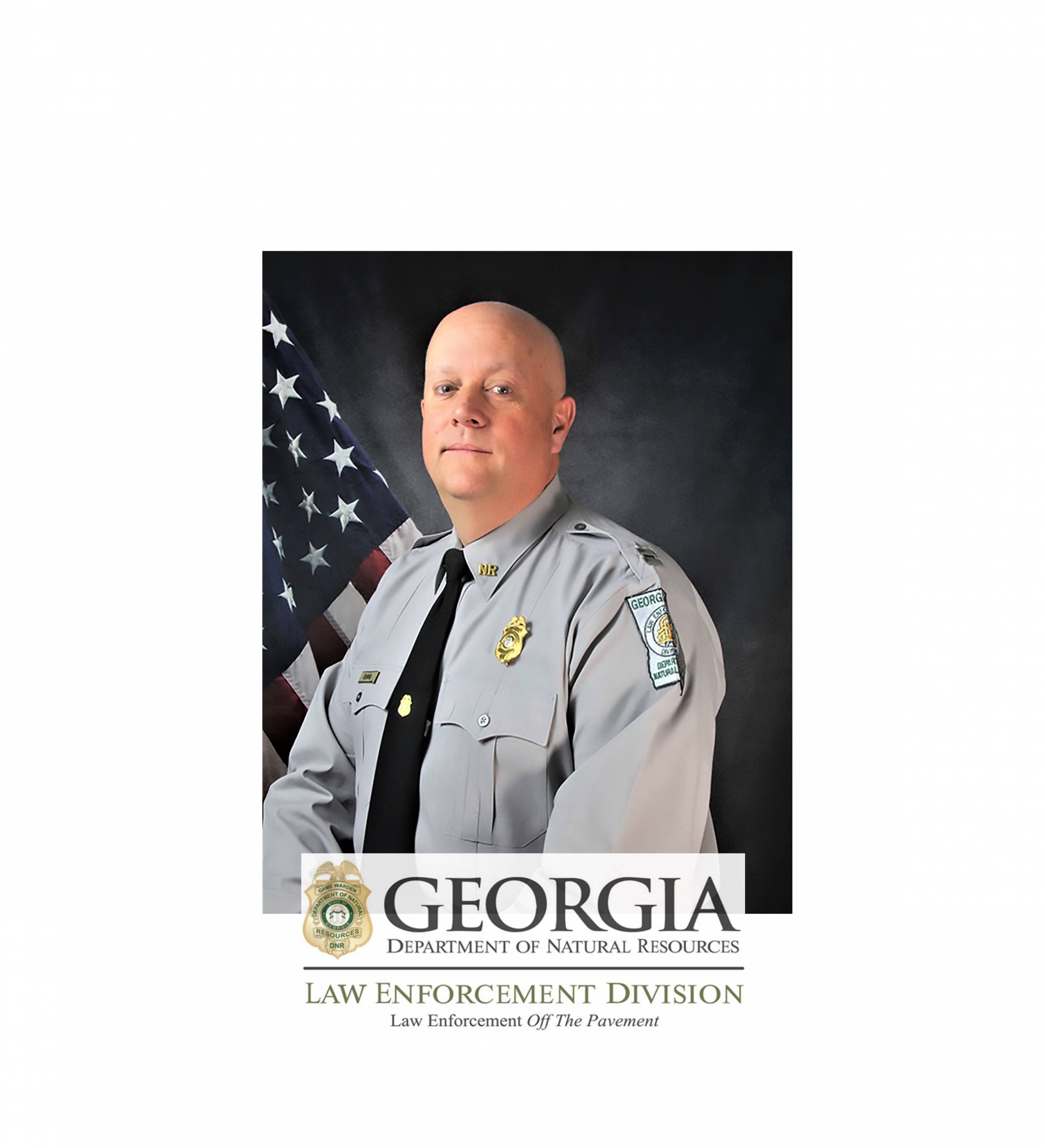 In a teleconference on March 15, 2021, the National Fish and Wildlife Foundation (NFWF) posthumously presented Georgia DNR Law Enforcement Captain Stan Elrod with the prestigious Guy Bradley Award for his lifetime contributions to wildlife law enforcement, positive impact on the community and the state, selfless devotion to others, and outstanding leadership. The award is only presented to one state and one federal recipient each year and was accepted by his widow, Julie.

“The late Captain Stanley Curtis Elrod truly was everything you could ask for in a law enforcement officer who works to protect our natural resources and who inspires others to see the immense value of our nation’s native species,” said Jeff Trandahl, executive director and CEO of the National Fish and Wildlife Foundation. “His death in the line of duty is a tragedy, but his accomplishments during his 27-year career with the Georgia Department of Natural Resources Law Enforcement Division will live on for generations. In addition to his exceptional law enforcement service, Captain Elrod was instrumental in passing Taylor’s Law, legislation that granted special hunting privileges to anyone 21 years or younger with a terminal illness. He also worked to implement programs aimed at preventing firearm-related accidents among school children. Captain Elrod will be greatly missed by his family, his colleagues, and all of us who cherish the great outdoors.”

Captain Elrod began his career in Law Enforcement in 1993 and worked his way up to the rank of Captain and northeast Georgia Region Supervisor, where he oversaw law enforcement activities in 26 counties on seven impoundments, 16 DNR managed Wildlife Management Areas, and over a million acres of USFS lands. Sadly, Captain Elrod’s career tragically came to an end on September 3, 2020 when he was participating in the agency wellness program. Just after 7:30 PM, while on duty, he was struck and killed by an impaired driver.

“Stan was an outstanding game warden and a great man and is truly deserving of this award,” said Colonel Thomas Barnard, director of Georgia DNR’s Law Enforcement Division. “His legacy will live on in our Division well into the future.”

Throughout his career Elrod had a number of successes to his credit. In 1999, he was named Game Warden of the Year for the entire State of Georgia. He was a founding member of the DNR’s Honor Guard and worked on security teams during the 1996 Olympics and the G8 Summit on Sea Island in 2004. In 2003, he was awarded the POAG (Peace Officers Association of Georgia) Arthur Hutchins Award for Meritorious Service. Most recently, he received the John W. Jacobs Sr. Memorial Award for excellence in law enforcement. This award is given to Officers in the Hall County Georgia area for their outstanding contributions in law enforcement.

In 2005, Captain Elrod began working with a group that would become a passion for him, the Outdoor Dream Foundation. The Outdoor Dream Foundation was founded in 2004 and is a 100% volunteer driven, non-profit organization that grants outdoor adventures such as hunting and fishing trips to children and youth under 21 years of age who have been diagnosed with terminal or life-threatening illnesses. He not only organized and helped fund-raise for the organization, he was also a Board Member. He went on countless hunts and fishing trips, including several bear hunts with kids in North Carolina, delivered mounted trophies to the kids while they were in the hospital, and on at least one occasion was by the child’s bedside when they passed away. His devotion to those kids and that cause was never ending. In fact, he had delivered several boxes of shotgun shells to the Davison Farm in Franklin County for their annual Dove Hunt just hours before he was killed. He delivered them early because on opening weekend of dove season, he had planned to go on an alligator hunt with a local family whose son had been killed a couple of months earlier in a car accident. His selfless acts and devotion to others were truly unmatched.

Elrod also made three rides on the Police Unity Tour, a bicycle ride covering 250 miles over the course of three days to raise funds for the National Law Enforcement Officers Memorial in Washington, D.C. The Memorial is a wall of names which recognizes law enforcement officers who have made the ultimate sacrifice in the line of duty. Seven Georgia Game Wardens are on the wall and on May 13, 2021 at the 33rd Annual Candlelight Vigil during National Police Week, Captain Elrod’s name will now be placed on that wall as well. Their names are also on a granite memorial outside of the Department of Natural Resources Law Enforcement Division’s Headquarters in Social Circle, Georgia.

“I am grateful that NWFW has recognized Captain Elrod’s dedication and contributions to Georgia DNR and to protecting our natural resources, our wildlife and our citizens,” said Georgia DNR Commissioner Mark Williams. “He was an exemplary member of the DNR family, and he will be profoundly missed for generations to come.”

The Guy Bradley Award
In 1905, Guy Bradley, a Florida game warden, became the first wildlife law enforcement agent killed in the line of duty protecting the nation’s wildlife. Law enforcement agents like Bradley are essential to virtually every aspect of wildlife conservation, from recovering endangered species to managing waterfowl and big game resources. In 1988, NFWF established a national award in honor of Bradley to recognize individuals for achievements in wildlife law enforcement. The award focuses on activities which directly aid or advance the law enforcement goals and mission of state and federal fish and wildlife agencies. It is an opportunity to recognize officers who, during their careers, put their life on the line for wildlife.