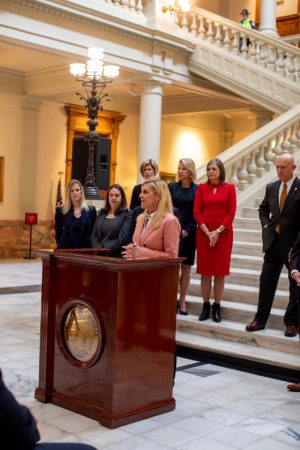 The Peach State has received a considerable amount of money from the federal government to combat crime and improve public safety.

“Human trafficking is a cruel and barbaric practice that calls to mind the darkest moments of our history, and sadly it has left its mark on the communities of Georgia,” said Principal Deputy Associate Attorney General Murray. “Under the direction of Attorney General Barr, the Department of Justice is putting the full weight of its resources behind the brave men and women of the state who are fighting trafficking perpetrators and bringing relief to victims. We commend these courageous and compassionate professionals and are proud to lend them our full support.”

“Human trafficking is an obscene violation of human rights and human dignity, affecting millions of people worldwide, countless victims in this country and hundreds if not thousands of men, women and children right here in Georgia,” said Principal Deputy Assistant Attorney General Sullivan. “We are so grateful to the law enforcement officers who pursue these vicious criminals and to the dedicated service providers who work around the clock to get survivors the help they so desperately need and deserve.”

Many trafficking victims in Georgia are teenagers who are sexually exploited. Of the 375 cases reported from the state to the National Human Trafficking Hotline last year, most involved sex trafficking and almost a quarter involved a minor. During an FBI-led, month-long, nationwide operation focused on recovering child victims of sex trafficking, known as Operation Independence Day, the FBI, in cooperation with 400 law enforcement agencies, identified and/or recovered more than 100 child victims of sex trafficking, including seven in Georgia. Law enforcement officials also arrested 67 suspected traffickers. Grantee organizations that received previous Justice Department funding served 140 human trafficking clients in 2018.

The awards today support a range of activities designed to bring sex and labor traffickers to justice and provide critical services to victims. A grant to the Georgia Criminal Justice Coordinating Council will fund a multidisciplinary task force composed of law enforcement agencies, including the Georgia Bureau of Investigation, and several victim service organizations. Funds will also support direct victim services provided under the auspices of the Georgia Coalition to Combat Human Trafficking. Other awards will help ensure that children and minors who are victimized receive counseling, case management and other critical services. Georgia Care Connection Office, Inc.; Wellspring Living, Inc.; Tapestri, Inc.; and the Georgia Center for Child Advocacy are among the grant recipients.

“Human and sex trafficking are not victimless crimes.  These grants will go a long way in not just furthering our prosecutorial efforts for these terrible crimes, but also in providing much needed victim-centered services. Our office continues to be fully committed to eradicating human trafficking within the Northern District of Georgia,” said Byung J. “BJay” Pak, U.S. Attorney for the Northern District of Georgia.

“In Georgia, the fight against human trafficking is a coordinated effort of federal, state and local law enforcement and prosecuting agencies working together to identify, arrest and prosecute those who choose to engage in this horrific industry,” said U.S. Attorney for the Middle District Charlie Peeler. “In the Middle District, we aggressively investigate and prosecute cases where offenders prey on vulnerable citizens, taking advantage of their age, their desire for love and affection, their financial status and their addictions. I am confident that these federal dollars will provide critical support to those who are dedicated to protecting victims and arresting perpetrators, which will lead to the end of human trafficking in our state.”

“Human trafficking is a pervasive, growing threat plaguing communities across our state and country,” said First Lady Kemp. “I applaud the federal, state and local partners who are committed to healing victims, seeking justice and holding bad actors accountable. By working together, we will end this criminal enterprise – once and for all.”

“We thank the Department of Justice for making it possible for us to continue and expand on our anti-trafficking efforts in Georgia,” said Georgia Attorney General Chris Carr. “The resources announced today, will help ensure more victims in Georgia get the support they need and help ensure that our law enforcement officials have every tool at their disposal to put buyers and traffickers behind bars where they belong.”

The remainder of the state’s awards cover a wide range of criminal justice, juvenile justice and victim service activities. Grants will support school safety initiatives, law enforcement hiring, services for domestic violence and sexual assault victims, inmate reentry services, youth mentoring and efforts to combat online child exploitation and manage sex offenders. Awards were made by the three grant-making components of the Department of Justice — OJP, the Office of Community Oriented Policing Services and the Office on Violence Against Women.