Regan Wheeler, was brutally gunned down in his driveway. 14 years later, there has still been no conviction of a guilty party, and a crippling lack of leads for authorities to pursue. 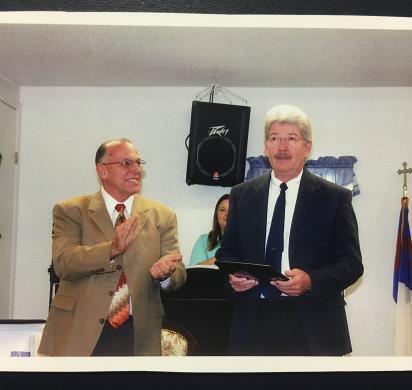 More than 14 years ago, the life of Homeland Security Investigations (HSI) Special Agent Matthew Brooks and his family was changed forever with the murder of his father.

On Oct. 13, 2005, Brooks’ father, Regan Wheeler, was brutally gunned down in his driveway. As the shots rang out, his life was cut entirely too short, a family was shattered, and his community suffered the loss of a man whose entire life was dedicated to service.

An active police investigation on the state and local level has been ongoing since that day in Dallas, Georgia. Fourteen years later, there has still been no conviction of a guilty party, and a crippling lack of leads for authorities to pursue.

“We still have not lost hope, we just hope that the community does not lose interest,” said Brooks.

As an active member of his local church and prison chaplain, Regan had a heart for reaching those who society had written off as hopeless; his mission in life was to spread the word and love of God to all those he encountered, Brooks said.

A doting father and husband, Regan left behind a daughter and son who have been forced

to navigate their lives without a father, a wife who’s never known the closure of justice, and a wide circle of family and friends who still wonder why such a heinous crime occurred to this family.

The family says the bottom line is that someone out there knows something that will bring this long and painful investigation to a close. They are pleading with the public to share any and all information with the authorities. The heartbreak of losing Regan is a wound that will never fully heal, but a sense of closure on the case is all his family can hope for.

Now, that same son works for HSI Tampa and has dedicated his entire life to service to his country.

Brooks, now a special agent in the HSI Tampa Sarasota office, continues to hope that one day his father’s murder will be solved.

There are no active leads, and the case is considered “cold.” but Brooks continues to encourage his family that one day the case will be solved.

With federal law enforcement relooking the case, the family started a gofundme Regan Wheeler Cold Case Reward page, as oftentimes a reward is what can bring forward new information, according to Brooks from his talks with agencies supporting the case.

In addition, his local law enforcement partners at the Sarasota County Sheriff’s Office put the information on their Facebook page, helping to grow the interest in getting this case solved.

Even 14 years later, Brooks continues to try and obtain media coverage, talk show interviews, fund raising for reward money, continued law enforcement cooperation and most importantly keep faith that one day the phone will ring with someone on the other line saying “we got him!”