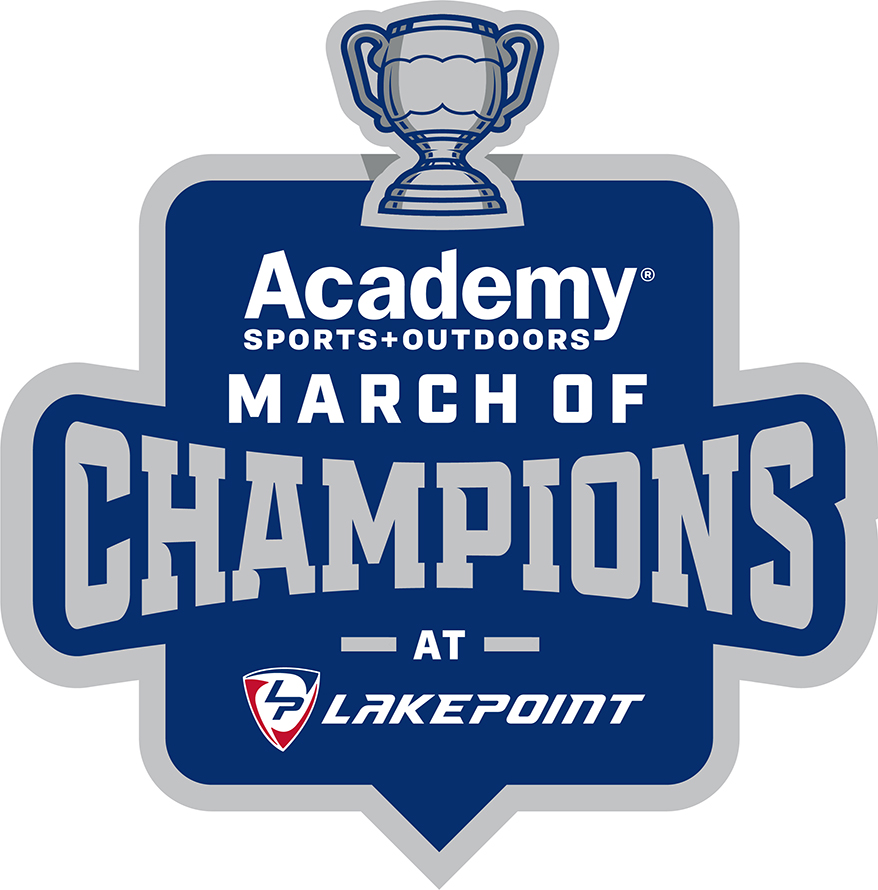 Demand to compete at the LakePoint campus is at a fever pitch, as elite travel and youth sports athletes look to play in state-of-the-art venues, utilize the best in technology to improve their skills and get noticed by college coaches and pro scouts.

“Elite travel sports athletes understand that competing at LakePoint Sports during the Academy Sports + Outdoors ‘March of Champions’ weekend means they have an opportunity to be seen by college coaches and pro scouts,” David Pate, director of marketing at LakePoint Sports, said. “Coaches and scouts consistently tune in to LakePoint Live, powered by PlaySight, our state-of-the-art live streaming platform.”

Between RYZE Hoops, Prep Baseball Report Tournaments, NFL FLAG, and Rally Volleyball, this weekend will feature the best travel and youth sports athletes from across the nation.

“We are excited Academy Sports + Outdoors is the title sponsor for this action-packed weekend,” said Greg Barckhoff, executive vice president of partnerships and marketing at LakePoint Sports. As one of the nation’s largest sporting goods and outdoor stores, Academy Sports + Outdoors is offering our travel athletes an exclusive mobile discount that provides them with the best equipment before the competition. In addition, this weekend will feature DJs, partner promotions, food & beverage specials, a live broadcast from the southeast’s No. 1 sports talk radio station 680 the Fan, and more.”

The RYZE Hoops Tip Off Classic highlights the “March of Champions” weekend. It begins on March 26 and will include nationally ranked four- and five-star players, such as Isaiah Collier (Wheeler High School Class of 2023) and Stephon Castle (Newton High School Class of 2023). Most players are still considering offers, and several Power 5 college programs will be tuning in to watch the action via LakePoint Live, powered by PlaySight. Division I coaches will not be in attendance due to NCAA recruiting rules. However, Division II and III coaches will be on campus to see the players show off their talent.

New to the “March of Champions” weekend this year, NFL FLAG will kick off Georgia’s Friday Night Lights series, consisting of over 20 weekends through the year, at the LakePoint Multi-purpose Fields Complex. NFL FLAG, powered by Reigning Champs Experiences (RCX), is the leading flag football organization in youth sports.

“We are excited to be hosting the Friday Night Lights series in Georgia for the first time at LakePoint’s Multi-purpose Fields Complex,” said Izell Reece, CEO of RCX Sports. “This will allow us to further our mission and encourage more of today’s youth to play football.”

In addition, the newly renovated Multi-purpose Fields Complex will feature the top soccer clubs in the southeast on Saturday and Sunday.

Each of LakePoint’s four state-of-the-art venues will be in action as Rally Volleyball will host top beach volleyball players in the southeast at the LakePoint Beach Volleyball Pavilion this weekend in its Spring Dreams tournament.

Fans, scouts, coaches, and media can catch all the action via LakePoint Live, powered by PlaySight. LakePoint Live features more than 130 HD cameras across campus with over 70 cameras in the Champions Center and 56 cameras across all eight major league-sized baseball fields (seven/field) and multiple angles by court or field to catch the live action or download for viewing it later. For details, check out www.LakePointSports.com/LakePoint-Live.