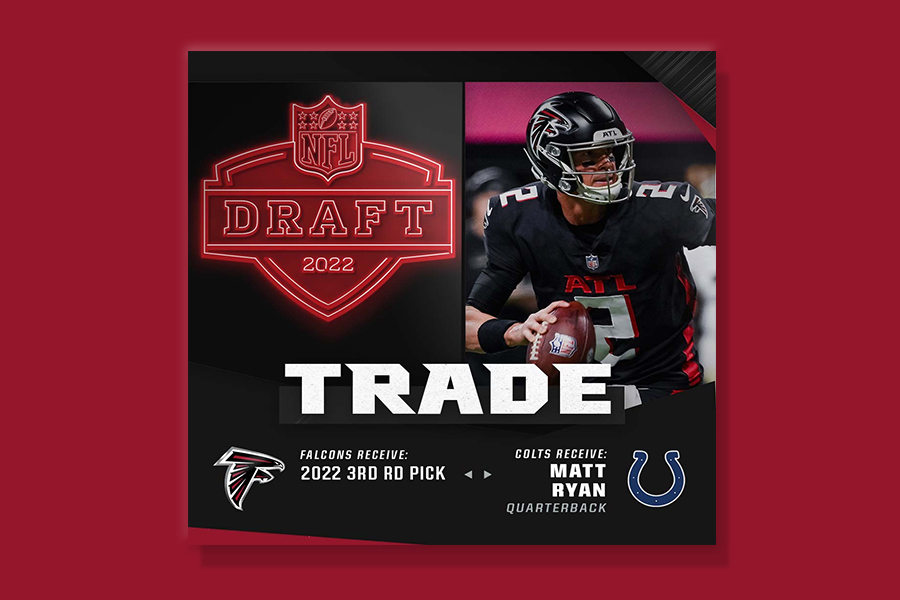 The Atlanta Falcons today announced that they have traded quarterback Matt Ryan to the Indianapolis Colts for a 2022 third-round pick.

“OFFICIAL: We have traded QB Matt Ryan to the Colts for a 2022 third-round pick.”

This deal formally ends Ryan’s 14-year tenure as the team’s starting quarterback, where he set every major franchise passing record and led the Falcons to the playoffs six times.

The trade reaps valuable draft capital, frees up some salary-cap space in 2022 and sets the Falcons up to have a significant amount of cap space in 2023, creating the financial flexibility essential to the franchise’s long-term health.

Ryan moves on to Indianapolis, which traded Carson Wentz to Washington earlier this offseason and needed a starting quarterback.

While Ryan has meant so much to the franchise during a long tenure that began back in 2008, the move allows the organization to focus on its long-term solution at quarterback. Owner Arthur Blank talked recently about the need to execute a succession plan at the position, which now begins as the Falcons move on from the person who started 222 games for the Falcons over 14 seasons.

Owner Arthur M. Blank released a statement on the departure of Matt Ryan:

“Matt Ryan has been the epitome of a franchise quarterback during his time here in Atlanta. He has represented this organization with great class, professionalism and leadership, both on and off the field, over the past 14 years. It is difficult to overstate what he has meant to me personally, our organization, his teammates and our fans. From his first day in the building, Matt has given his all in the pursuit of winning a championship for Atlanta. His arrival in 2008 instantly made us a contender in the NFC and he’s been our quarterback through the most successful era in Falcons history. Matt led us to the playoffs six times, including two NFC Championship games, and the first Super Bowl appearance under my stewardship of the franchise. He holds every significant passing record in club history, is an All-Pro, an NFL MVP and is without question one of the greatest players in Falcons history. He will one day be added to our Ring of Honor, and it is my belief that a bust in Canton will follow in short order.

This business is not without its difficult decisions, and while this is one of the most difficult decisions we have faced as a club, we feel it is in the best long-term interests of both the Atlanta Falcons and Matt Ryan. On behalf of the entire Falcons organization, I wish him success as he continues his career and know that he will bring the same dedication and professionalism to his next club. We also wish health and happiness to his wife Sarah and their twin boys, Johnny and Marshall.” 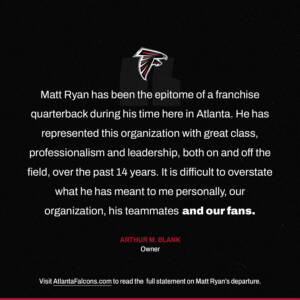