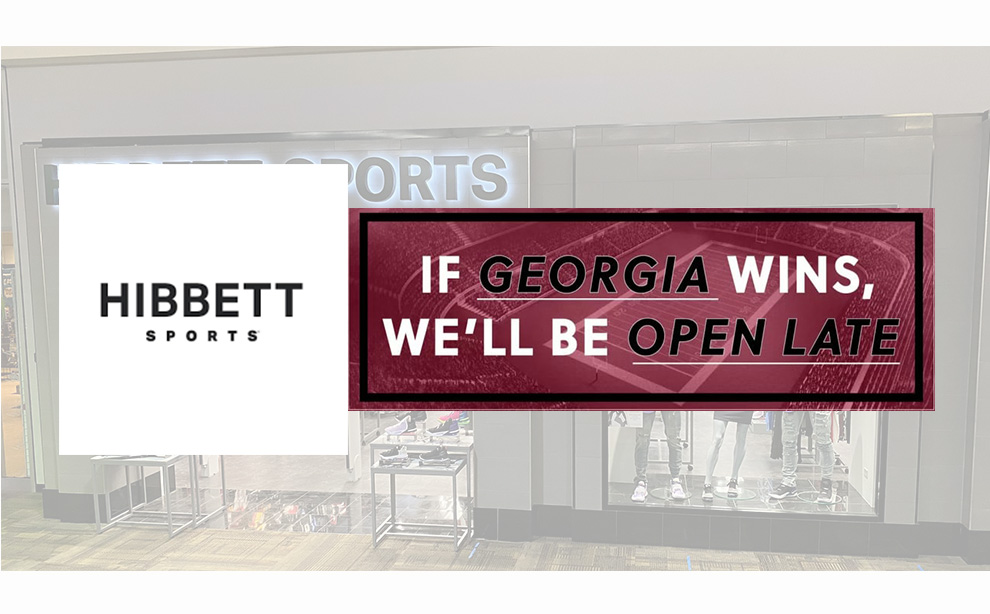 Hibbett announced today that dozens of Hibbett stores in Alabama or Georgia will reopen on Monday night in the winning market, immediately following the College Football National Championship Game.

The rival face-off between University of Alabama, Crimson Tide and University of Georgia, Bulldogs for the Championship Title will be televised from Lucas Oil Stadium in Indianapolis on Monday, January 10, 2022 at 8pm eastern.

“The College Football Championship is one of the most anticipated sporting events of the year and we have a long tradition of reopening after the game so loyal fans have the ability to get their official championship gear without delay,” said Ben Knighten, Senior Vice President Operations, Hibbett. “We will be well-stocked with gear for fans who want to stop by immediately after the game or come by first thing on Tuesday to get their official Championship shirts and hats.”

To find Hibbett stores that will reopen with official championship gear after the game on Monday night if Alabama wins, visit Alabama stores or if Georgia wins, visit Georgia stores . Fans in other cities can shop their local stores and checkout the variety of team apparel and headwear online at Hibbett.

Hibbett, headquartered in Birmingham, Alabama, is a leading athletic-inspired fashion retailer with 1086 Hibbett and City Gear specialty stores, located in 35 states nationwide. Hibbett has a rich history of convenient locations, personalized service and access to coveted footwear, apparel and equipment from top brands like Nike, Jordan, and adidas. Consumers can browse styles, find new releases, shop looks and make purchases online or in their nearest store by visiting www.hibbett.com.  Follow us @hibbettsports and @citygear on Facebook, Instagram and Twitter.