Road Side at a Road Check: A Look at the Regional Effort to Improve Safety

On the sidelines of a Governor’s Office of Highway Safety road check, Jessica Szilagyi covers a multi-agency safety checkpoint with an in-depth expose on what happens when motorists pass through. 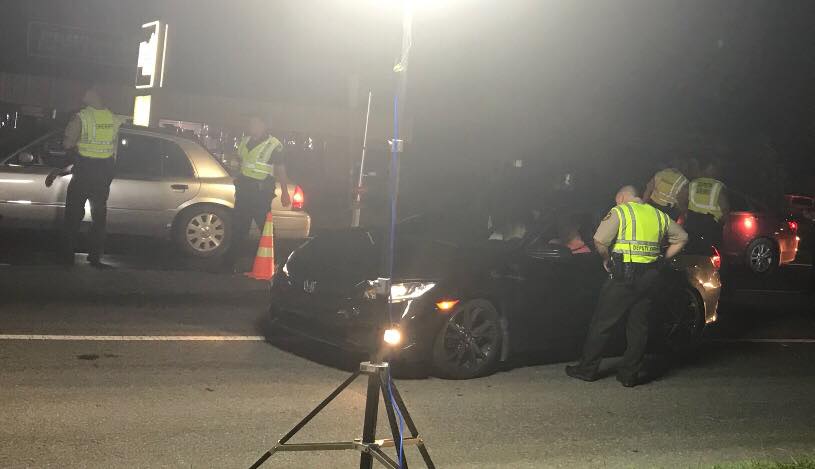 Last month AllOnGeorgia was invited to observe a road safety check put on by the Governor’s Office of Highway Safety (GOHS). The June meeting was held in Effingham County – at both the Sheriff’s Office and on the roadside in unincorporated Effingham – and included law enforcement agencies from the respective GOHS Region, which includes Bulloch, Bryan, Candler, Chatham, Effingham, Evans, and Screven counties.

Nearly 50 sheriff’s deputies, police officers, and state troopers line the roadside of Highway 21 in Rincon. The elements of the humid summer evening make for somewhat pleasant conditions for an organized safety check in the works just after nightfall in Effingham County.

The various law enforcement officials have just come from the Effingham County Sheriff’s Office where Traffic Enforcement Unit Sergeant Brian Mundy presented a refresher on the parameters of safety checks. The training and continued education hours are required by the Governor’s Office of Highways Safety (GOHS), a statewide initiative partnering a number of coalitions whose sole purpose is to reduce the number of crashes, injuries and fatalities on Georgia’s roads.

Agencies take turns hosting the monthly meetings, which are followed by safety checks of varying sorts, in the host communities. The regional effort is especially beneficial for agencies who do not otherwise have the ability to conduct safety checks or large scale enforcement campaigns due to limited manpower. Many of the smaller departments, like Claxton and Metter, bring half of their force for what Claxton Police Chief Dale Kirkland says is great for networking and relationship building.

In Georgia, road checks are permitted when authorized by the agency head (Sheriff or police chief) or their designee, though the state Department of Public Safety is governed by different guidelines. While it is often stated otherwise, law enforcement agencies are not required to publish or give advancenotice of an safety check, only that the checkpoint is, in fact, a road check.

After the cones, road signs, and lights are set up, officers and deputies are on both sides of the roadway with their flashlights. One is prepared to check the driver’s license while the other keeps an eye on the passengers and the vehicles. Though they screen every car, the collaborative effort has them checking 10 to 15 cars at a time. Outside of delays because of the traffic signal, the majority of motorists are stopped for less than a minute. Another group of law enforcement officials is a short distance away on a parallel side road to catch drivers attempting to leave the road check line and go a different route.

Secondary officers, mostly Troopers and Nighthawks from the DUI Task Force, look on from a grassy area just off the shoulder to assist with different enforcement actions, like field sobriety tests and Intox machines, for persons suspected of driving under the influence. EMS personnel are aware of the check and on-call in the event that a blood draw is needed.

Closer to the long line of marked vehicles – several of which have K9 officers in them – are two technicians from Safe Kids Georgia, a nonprofit organization that educates the community on the importance of child restraints, often providing the seats at no cost to families in need.

It takes about fifteen minutes to work out the coordination and communication kinks and keep the line moving efficiently, but it’s only a few minutes before the first motorist is asked to pull over to the left shoulder. The driver has five children in her compact vehicle, four of whom are not restrained in car seats or booster seats. Two children under six are sharing a spot in the front seat. The woman is asked to call a family member to transport at least two of the children and will spend more time on the shoulder than anyone else that evening. While she is given a handful of car seat violation citations, Safe Kids fits her car and children with the necessary car seats at no cost to the driver. 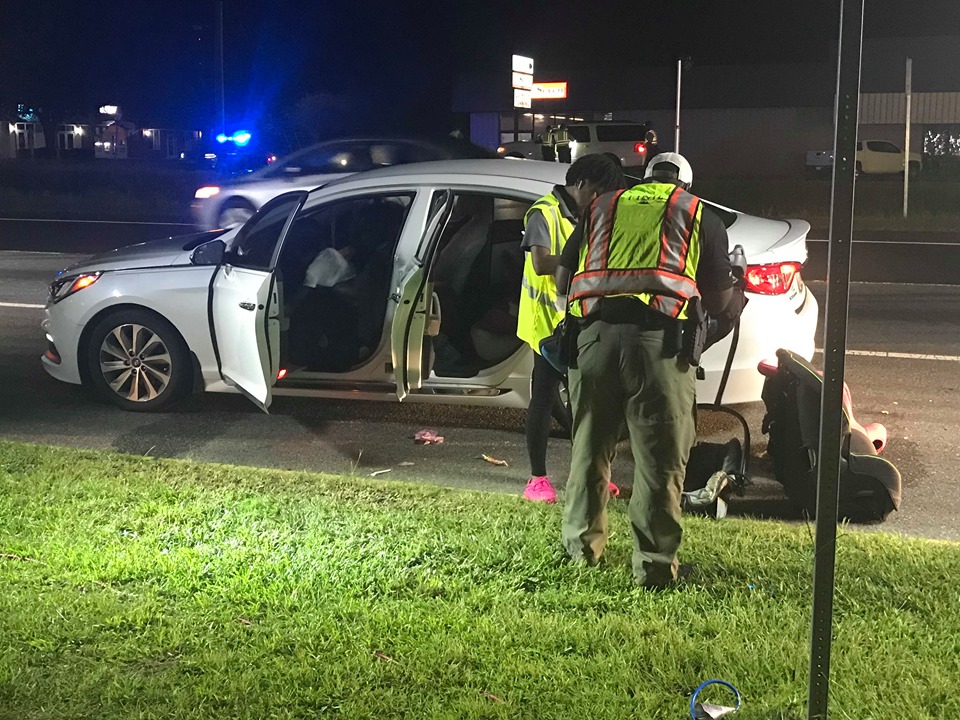 By 10:30 p.m., the license check line is running at peak efficiency. The number of motorists on the left shoulder is now averaging four at a time. So far, at least two drivers have passed field sobriety tests and are given the go ahead to go on home. One of them thanks the Trooper for his objectivity during the testing. A deputy asks a handler to bring his K9 over to one of the vehicles for assistance. The dog alerts after a free air search and the driver and his passengers are questioned further as the vehicle is searched for drugs. Finding a negligible amount of marijuana, the drugs are destroyed and the parties are sent on their way.

A dozen or so drivers have been issued citations for minor traffic violations at this point, but the majority of motorists pass through the checkpoint with minimal delay and inconvenience.  From 30 yards away, cordial small talk dominates most of the conversation across races and genders. People can be heard thanking the officers for their efforts and encouraging them to be safe as the night carries on. 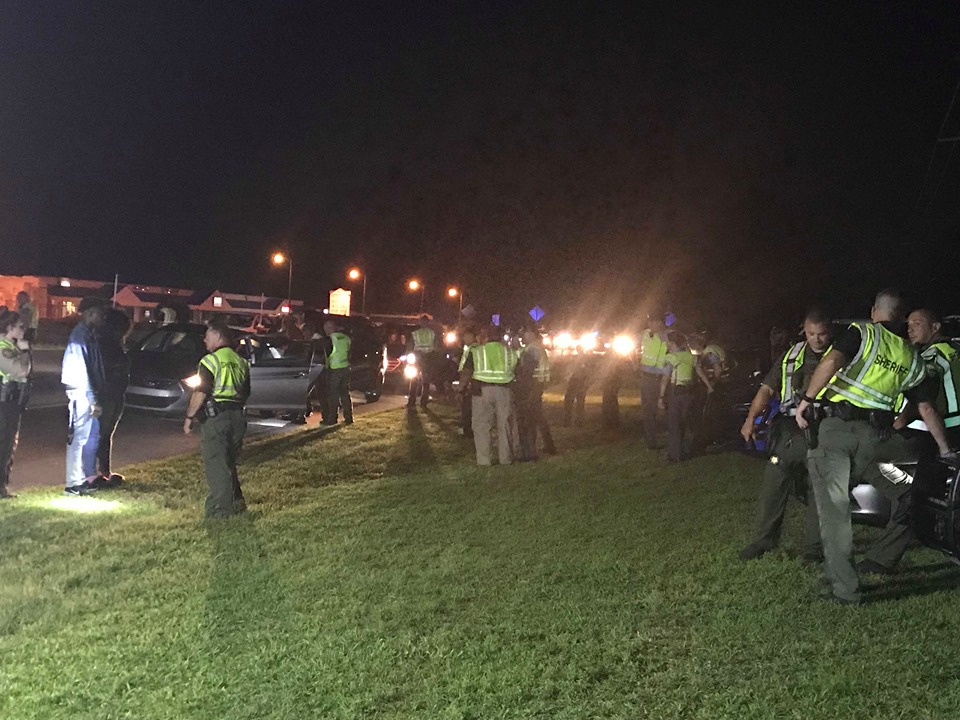 The Savannah Bananas baseball game lets out one county over which increases the flow of traffic. To avoid a complete bottleneck, officers at the front of the line begin letting waves of cars go through, letting traffic flow for a minute or two at a time, or based on a certain and set number of vehicles permitted to pass through.

License checks resume and a male motorist is sent to the shoulder of the road. He is suspected of driving under the influence and begins to speak with a Trooper who conducts field sobriety tests. The man is unable to even complete the tests and EMS is called after he consents to a blood draw to test the alcohol level in his blood. Despite the forthcoming arrest, the man is polite and requests that he be permitted to call someone to get his vehicle instead of having it towed, a request the Trooper agrees to allow.

Midnight is approaching as another woman is asked to pull over to have the children in her vehicle properly restrained. SafeKids once again equips the family with the necessary seats, but there’s no mercy on the citation side. With so many officials from different traffic units across the region, a warning is not an option. With regard to just about everything else, however, discretion of the officer is a notable characteristic of the evening.

After more than three hours on the road side, just two people are handcuffed in the jail transport vehicle. Both will be booked on charges of driving under the influence.

By 2:00 a.m., the roadside is starting to look bare again. Traffic is obviously more sparse and the equipment is packed up. Some go their separate ways, but most head back to the Sheriff’s Office for a middle of the night breakfast. With another successful enforcement campaign in the books, they’ll go back to their respective corners of the region until they meet again next month.