A rapper who boasted in a YouTube music video about getting rich from committing unemployment benefits fraud was arrested today on federal charges of carrying out that very scheme by fraudulently applying for more than $1.2 million in jobless benefits, including by using stolen identities. 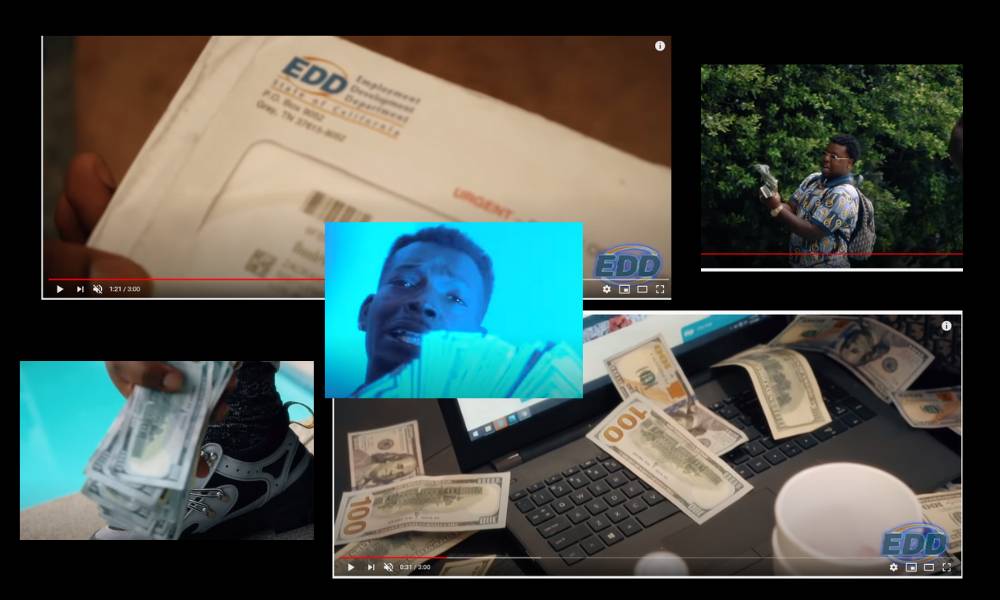 A rapper who boasted in a YouTube music video about getting rich from committing unemployment benefits fraud was arrested today on federal charges of carrying out that very scheme by fraudulently applying for more than $1.2 million in jobless benefits, including by using stolen identities.

Fontrell Antonio Baines, 31, who uses the stage name “Nuke Bizzle,” of Memphis, Tennessee and who currently resides in the Hollywood Hills, was arrested pursuant to a criminal complaint alleging a scheme to fraudulently obtain unemployment insurance benefits under the Coronavirus Aid, Relief, and Economic Security Act (CARES Act). Baines is expected to make his initial appearance this afternoon in United States District Court in downtown Los Angeles.

Baines allegedly exploited the Pandemic Unemployment Assistance (PUA) provision of the CARES Act, which is designed to expand access to unemployment benefits to self-employed workers, independent contractors, and others who would not otherwise be eligible.

According to an affidavit filed with the complaint, Baines possessed and used debit cards pre-loaded with unemployment benefits administered by the California Employment Development Department (EDD). The debit cards were issued in the names of third-parties, including identity theft victims. The applications for these debit cards listed addresses to which Baines had access in Beverly Hills and Koreatown.

Evidence gathered during the investigation established that at least 92 debit cards that had been pre-loaded with more than $1.2 million in fraudulently obtained benefits were mailed to these addresses, according to the affidavit. Baines and his co-schemers allegedly accessed more than $704,000 of these benefits through cash withdrawals, including in Las Vegas, as well as purchases of merchandise and services.

The affidavit further alleges that Baines bragged about his ability to defraud the EDD in a music video posted on YouTube and in postings to his Instagram account, under the handles “nukebizzle1” and “nukebizzle23.” For example, Baines appears in a music video called “EDD” in which he boasts about doing “my swagger for EDD” and, holding up a stack of envelopes from EDD, getting rich by “go[ing] to the bank with a stack of these” – presumably a reference to the debit cards that come in the mail. A second rapper in the video intones, “You gotta sell cocaine, I just file a claim….”

On September 23, Las Vegas police arrested Baines, who had in his possession eight debit cards, seven of which were in the names of other persons, the affidavit states.

A complaint contains allegations that a defendant has committed a crime. Every defendant is presumed innocent until and unless proven guilty beyond a reasonable doubt.

The criminal complaint alleges three felony offenses – access device fraud, aggravated identity theft, and interstate transportation of stolen property. If convicted of all of these charges, Baines would face a statutory maximum sentence of 22 years in federal prison.

This case is being prosecuted by Assistant United States Attorney Ranee A. Katzenstein, Chief of the Major Frauds Section.

American Contractor from Georgia Pleads to Conspiracy to Steal Gov’t Equipment from Military Base in Afghanistan
Priest sentenced to prison for destruction and trespassing on restricted naval installation in Georgia
Posting....