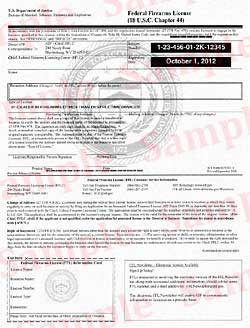 Licensed firearms dealer Christopher Koninsky, who allowed multiple individuals to buy guns for other people, has been sentenced to federal prison. Those guns were sold at his business, Team 88 Enterprises, and trafficked to several states outside Georgia and into the hands of criminals.

“Licensed gun dealers have the responsibility to follow the laws and regulations that govern the privilege of selling guns,” said U.S. Attorney Byung J. “BJay” Pak.  “That includes preventing straw purchases from occurring and running background checks on the real buyers of the firearms they sell.  Koninsky violated the trust invested in him and placed the community in grave danger when he allowed gun traffickers to acquire guns.”

“The majority of our firearms dealers are good people who are focused on running a business, helping customers and supporting their communities” said ATF Special Agent in Charge Arthur Peralta.  “Mr. Koninsky willfully disregarded regulations that are designed to prevent guns from falling into the wrong hands and as a result, he diverted guns into the criminal market.”

According to U.S. Attorney Pak, the charges and other information presented in court: After running a background check on a prospective buyer, and learning that there was something in the would-be purchaser’s background that prohibited them from possessing firearms, Koninsky instead allowed another person to complete the necessary paperwork to acquire the firearms. He then watched the prohibited person walk away with the firearms.

This was not the first time that Koninsky had allowed a person to put his name on paperwork to acquire guns on behalf of another, a practice commonly used by gun traffickers called “straw purchasing.”

Christopher Koninsky, 52, of Mableton, Georgia, has been sentenced to six months in prison, followed by six months of home confinement, and two years of supervised release. Koninsky was convicted on these charges on May 30, 2019, after he pleaded guilty.

The Bureau of Alcohol, Tobacco, Firearms and Explosives investigated this case.