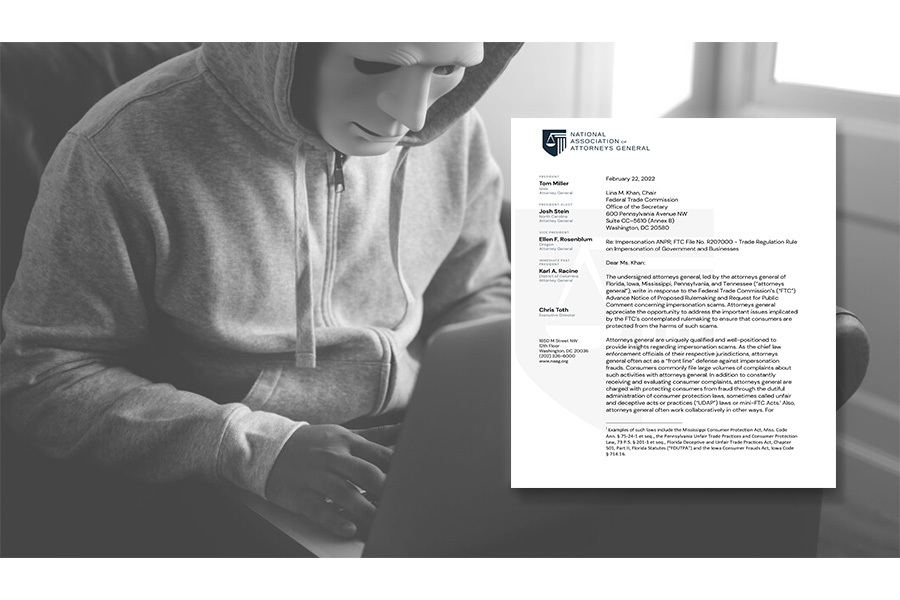 “Criminals continue to employ new methods in an attempt to steal personal or financial information,” said Carr. “With impersonation scams and associated losses on the rise, our Consumer Protection Division has worked diligently to warn Georgians of the red flags and connect with those who have encountered this unscrupulous behavior. By providing a standardized rule to address this growing problem, we can better protect consumers and ensure bad actors are held accountable.”

In a comment letter sent to the FTC, the coalition raises concerns regarding the increase in impersonation scams targeting consumers and the current lack of a national rule to outlaw these fraudulent acts and protect Americans.

As illustrated in the letter, impersonation scams can take on many forms:

Impersonation of government entities: Fraudsters claim to be from or affiliated with a government agency to persuade victims they must urgently provide payment to obtain licensing or certificates in document preparation or regulatory compliance scams.

Business impersonation: These are scams in which fraudsters claim to be working directly for an actual business or as a third party endorsed by the business. Common examples include tech scams in which the imposters claim they are contacting the victim on behalf of companies such as Microsoft or Apple to assist with a ransomware or technology issue.

Person-to-person deceptions: Grandparent scams, romance scams and others use personal information to make a connection with victims. Whether claiming a grandchild is in urgent need of money or creating a fake profile to gain the trust of someone on a social media or dating site, these impersonation scams account for thousands of complaints to attorneys general each year.

Though the methods may vary, impersonation scams cause injury to consumers who lose money, drain resources from regulators tasked with protecting the public, and cause confusion and loss of trust in government agencies and services.

“There is a pressing need for FTC rulemaking to address the scourge of impersonation scams impacting consumers across the United States,” the letter states. “A national rule that encompasses and outlaws such commonly experienced scams discussed [in our letter] would assist attorneys general and their partners in reducing consumer harm, maximizing consumer benefits, and holding bad actors to account.”

The FTC should publish additional consumer and business education materials to help prevent consumers from becoming victims of impersonation fraud. These efforts must serve as a complement to a strong regulation with a robust enforcement scheme, not as an alternative.

“The attorneys general hope to continue working with the FTC and other partners to sound the alarm on impersonation scams,” the letter states.

Georgia consumers who believe they have fallen victim to an impersonation scam can file a complaint with the Attorney General’s Consumer Protection Division by visiting consumer.georgia.gov or by calling (404) 651-8600.