OPINION: Bryan Co Defense of Victim’s Fund Use is More Like a Limp Shield

OPINION: Jessica Szilagyi talks about the recent rebuttal by local officials who claim they did not mismanage funds intended to help victims of crime.

Bryan County officials spoke out in a lengthy rebuttal to two articles published on AllOnGeorgia in recent weeks regarding the use of local victim assistance program (LVAP) –first on June 18 and again on July 8th–  which raised concerns over mismatching reports filed by county officials and the circuit district attorney’s office.

The article penned in the county legal organ focuses more on Bryan County’s interpretation of the law than it offers explanation as to why numbers, year after year, do not add up.

Titled “Local officials deny mishandling Victim Assistance funds,” the authors say the newspapers in Bryan and Liberty counties sought to “explore the allegations” made by AllOnGeorgia. But if you read the piece, the only thing they explored is how upset Bryan County government officials are over claims that they are not properly handling finances.

Let’s take a look at the defense by government officials as presented and consider them on a point-by-point basis:

The article cites Liberty and Long county officials as stating they are both in compliance, and that is true for Liberty County, but did the newspaper make  an attempt to check the statements in accordance with the law?

Court Clerk Sherry Long in Long County said in an email (which was reported in article 2) that no county reports exist because they send all of the money to the district attorney’s office, but state law – OCGA § 15-21-132(c) –  details that reports must be filed by the governing county EVEN IF the funds are sent directly to the district attorney’s office. If the county is not filing reports, they are not in compliance. If Sherry Long files reports but said the reports did not exist when AllOnGeorgia filed an Open Records Request, she failed to provide documents according to the law.

Long also told the Bryan County News that she doesn’t know who receives the funds, but told AllOnGeorgia in an email following an Open Records Request that the money goes to Kelly Jackson and Samantha Ashdown at the district attorney’s office.

Here is here letter to AllOnGeorgia: 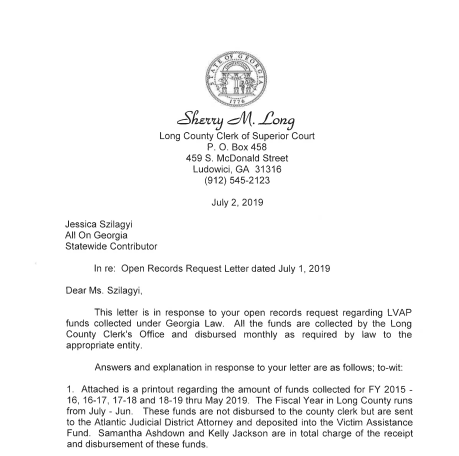 Additionally, the district attorney’s office still can’t articulate what specific, tangible victim services it provides to victims every year or why their reports do not match those sent to the state by the county governments. The newspaper made no mention of that – or anything about the Atlantic Judicial Circuit.

I fail to see how the county is denying mismanagement of funds. The core questions were not even answered by the entity that sought to publish their rebuttal and defend the local government’s position.

Expecting that assertions that the county did not mismanage funds to be a defense against concerns over consistently mismatching financial reports without answering any of the questions posed should only further concern taxpayers.