As we celebrate Father’s Day, we all reflect on our fathers or the father figures in our lives. I am grateful to have a father who gave me his time. He was not the dad you would ever hear bragging about his children or yelling loudly at events we participated in, but he didn’t have to do that for me to know how he felt about me. He showed it day in and day out with his presence and his interest in me.

I thought of his parenting recently when I read 1 Peter 2:6-7. “See I lay a stone in Zion, a chosen and precious cornerstone, and the one who trusts in him will never be put to shame.” Now to you who believe, this stone is precious. But to those who do not believe, “The stone the builders rejected has become the capstone”, and, “A stone that causes men stumble and a rock that makes them fall.”

The cornerstone of a building is the rock that the weight of the entire structure rests upon. That is why Jesus is referred to as the “Chief Cornerstone” of our faith. Fathers have the role of being the cornerstone that a family is built upon. A Cornerstone Father can be the foundation for his children in a way that allows them to feel supported so that they are able to build confidently and securely upon him.

But the cornerstone isn’t visible; the cornerstone does the hardest job beneath the surface of the structure. Cornerstone Fathers are similar in that they understand the most important foundation they provide their children is unseen. No amount of cheering from the stands, clapping at Awards Day or social media posts can replace the moments in the home or the time a father spends one on one with his children.

My fondest moments with my father were Sunday afternoons. After church and lunch we would hop in the truck, roll the windows down and take off, just the two of us. We would always stop to get a root beer for the ride. We had no place in particular to go, but we would always wind down a dirt road until we decided to go fishing or check for deer tracks or maybe just keep on riding.

A capstone is a decorative stone that sits on top to be seen by everyone. Similarly, Capstone Fathers do the majority of their fathering so that it is visible, but outside of their child performing, they aren’t very interested in their children. A child shouldn’t have to perform to get their father’s attention. Children are not here to be a feather in someone’s cap, they are gifts to be cherished.

There is no good sports metaphor I can think of for parenting because at the end of childhood, there is no trophy, only an adult. Being a father is more than cheering your child on, it’s more like riding down a dirt road together. It is teaching which way to go, how to stay in the middle of the road and how to handle things when you hit a big bump along the way.

I cannot recall one single conversation from all the hours my father and I rode together in that truck. However, I have come to a realization of what was really taking place in the cab as we sipped on root beers and wound down dirt roads. My Daddy was giving me a foundation of what it felt like to be loved, respected and cherished. Cornerstones may not be visible or decorative in any way, but they certainly provide security. Storms may come, but a cornerstone is deeply rooted and will not move.

Thank you to my Daddy, Mickey Jordan, for being the Chief Cornerstone of my childhood. The stability you provided has given me a rare confidence that goes with me everywhere. You are a chosen and precious cornerstone to me. Happy Father’s Day! 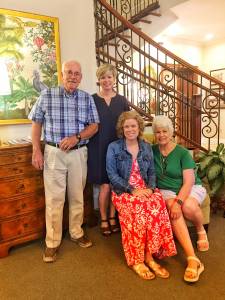