COLUMN: Why Are Local Governments So Quick to Limit Free Speech?

OPINION: Jessica Szilagyi talks about how local governments in Georgia are so quick to limit the free speech of citizens, business owners, and the media.

Why are local governments so quick to limit free speech?

This seems like an obvious, rhetorical question that government simply does not want to hear from the public because elected officials are viewed as celebrities as opposed to public servants, but on the heels of what happened last week in Peachtree City, the question really has me pondering how long the suppression is going to go on before it actually ends up in the courts.

The State of Georgia, while giving the impression of an ethics-centric state, has what I would call lukewarm sunshine laws. The laws, like any, have loopholes and leave room for interpretation, but the meat is in the enforcement and Georgia is lacking in enforcement. The Open Records Act and Open Meetings Act are both under the purview of the Georgia Attorney General’s Office and while the office has an open government division, the implementation is geared more toward ‘mediation’ than it is ‘enforcement.’ Local government officials can plead the ignorance card, the ‘I’m so busy!’ card, or the ‘That activist is a nut job!’ card and see leniency when it comes to retraining, sanctions, and fines. But, even through all of that, strongly worded letters, embarrassment in the media, and cited code sections get us much further in the peach state than in some other states.

Sunshine laws aren’t what I’m referring to when I mention the limits on free speech, but it’s important to acknowledge that the one Constitutionally-created state agency that can legally hold local governments accountable usually doesn’t… and that sets a precedent for everything else that trickles down from there.

The trickle down I’m referring to relates to the hurdles citizens, business owners, and sometimes even members of the press have to go through just to address local government officials.

There is no state requirement that mandates that local governments open the floor for public comment during workshops and/or governmental meetings, though some states do. Without a standard or a baseline at the state level, you end up with different rules for every city, county, and school board to regulate how the public goes on the record in an official meeting. Time may be limited to 2, 5 or 10 minutes. Some places require that citizens sign up before the meeting starts, while others demand that citizens give several days notice. Some have disclaimers that individuals may not be addressed, school boards note on their agendas that personnel matters can not be discussed, and some local governments prohibit discussion on matters that are not already on the agenda.

This bleeds over to social media where local governments haphazardly create their own restrictive policies about what can be discussed on their official pages and notate when they will delete comments and ban users.

No governmental entity should tell us what subject matter we can and cannot include when we seek to hold our elected officials accountable. This isn’t just my opinion, either.

The courts have repeatedly ruled in favor of the First Amendment in public forums holding that content-neutral restrictions — like time and place — are permissible, but content-based restrictions — as in actual subject matter – are not. The standard is that rules must be ‘viewpoint neutral,’ in that if one viewpoint is welcome, all viewpoints are welcome. This is illustrated in  City of Madison Joint School District No. 8 v. Wisconsin Employment Relations Commission,(1976), in Wilkinson v. Bensalem Township (1993), and City of Dayton v. Esrati (1997), to name a few. There are dozens and dozens of cases, but I won’t bore you with the endless citations.

The point is that citizens cannot be disruptive or repetitive or filibuster, but once the floor is opened for public comment, the governmental entity cannot tell you what that public comment can and cannot entail.

And those rules about not mentioning specific government employees or individual elected officials? They’re garbage, too. See Leventhal v. Vista Unified School District (1997), where the court wrote: “It seems clear that the Bylaw’s prohibition on criticism of District employees is a content-based regulation. … It is equally clear that the District’s concerns and interests in proscribing public commentary cannot outweigh the public’s fundamental right to engage in robust public discourse on school issues.” It was upheld again in Bach v. School Board of the City of Virginia Beach, 2001 and in 2016, the Virginia Attorney General issued an opinion halting government entities from prohibiting discussion on government employees.

The courts have also held that anything that takes place on official social media accounts is official public record and must be maintained. See Davison v. Loudoun County Board of Supervisors  (2017) and  Packingham v. North Carolina. Georgia’s Open Records Act also encompasses digital content and the retention of such information is detailed on the state archives policy.

You don’t have to be a lawyer to understand these things.

Many of you know that I live and work in rural southeast Georgia and while the issues are rampant down here, the limits on the First Amendment extend well beyond the boundaries of my region.

Just look at a few of these policies, which are publicly displayed and in conflict with legal precedent: 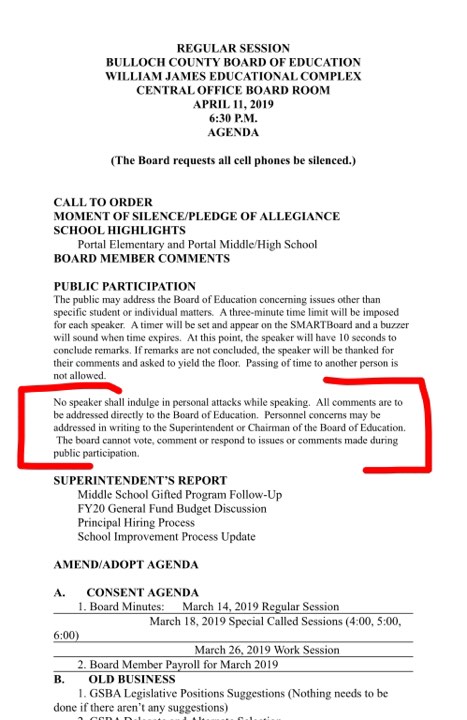 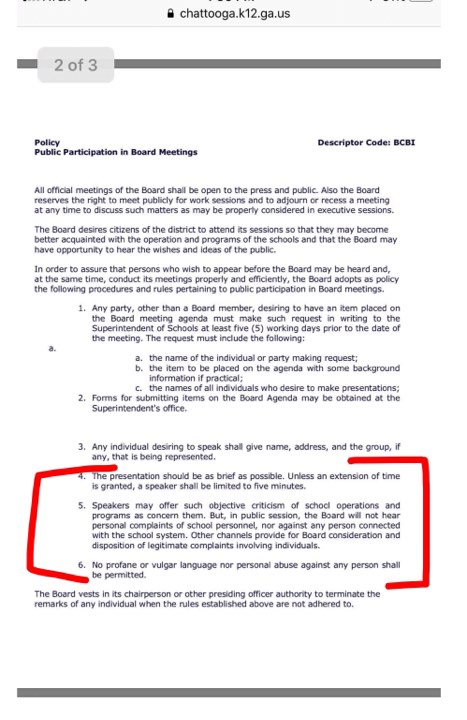 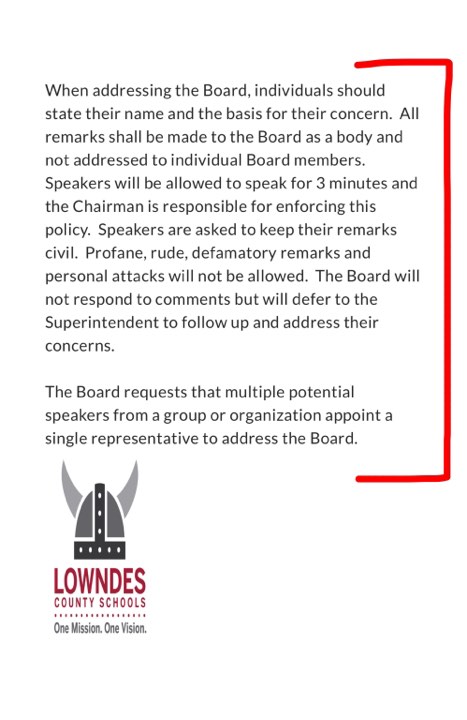 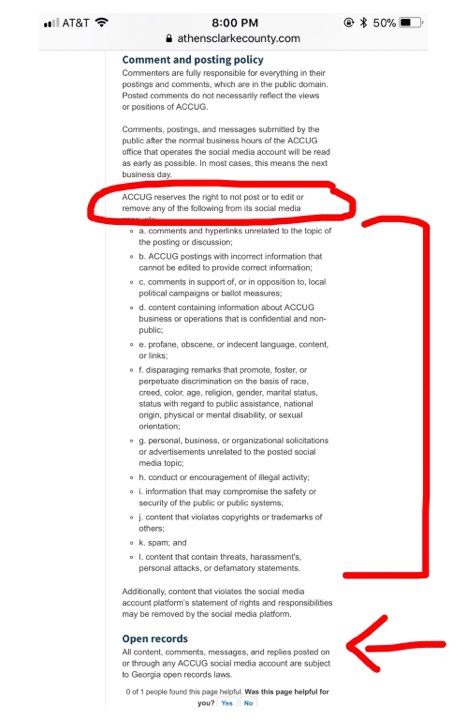 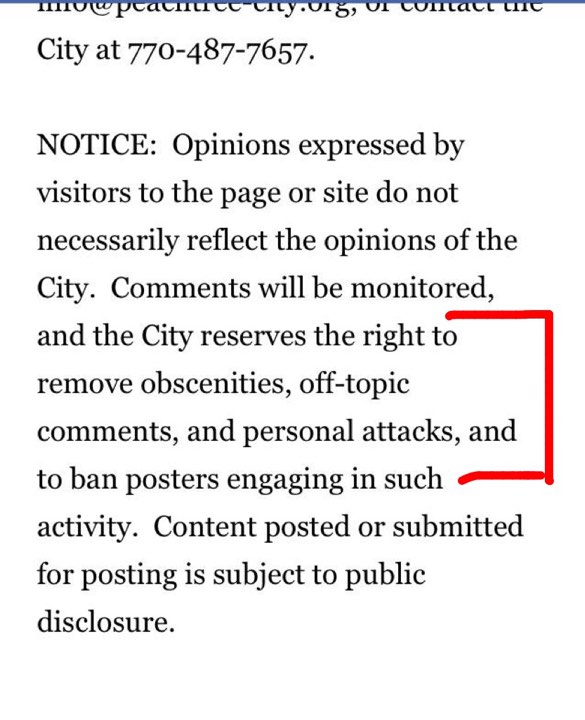 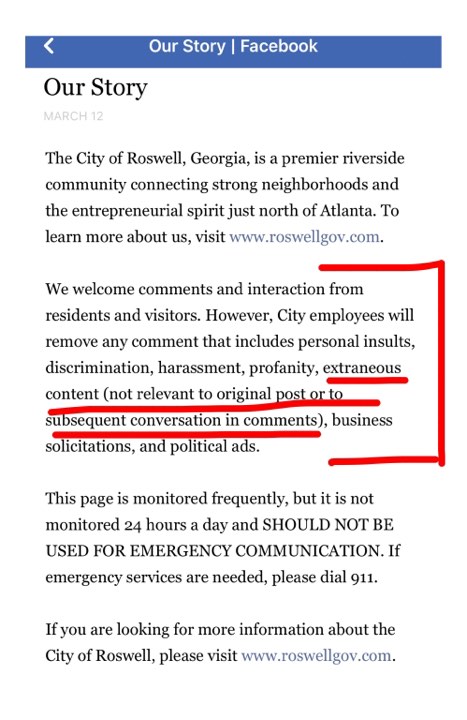 And look at this lengthy public participation request form required in Douglas County. Or Vidalia City Schools which says “The board Chair will determine whether it is in the interest of the school system to allow the request.” Or Glynn County which says you can’t insult anyone in government.

So why do they do it anyway? And why aren’t local governments held accountable when they delete comments and questions off of social media, especially if the platforms are considered ‘official record’?

My guess is that this will continue until someone files a lawsuit and forces them to stop or the state legislature takes the lead and prioritizes transparency at the state and local level. It’s bad enough that local governments aren’t required by law to make time for citizens to speak up. It’s even worse that they work to limit the content in the growingly-rare instances that they ever-so-graciously allow the little people to speak out.

If you know of a local government that limits the content of public speech in meetings, I’d love to hear from you.