I’ll start with a brief history of how the hunting regulations work here in Georgia. For as long as I can remember the state was divided into two zones, the Northern Zone and the Southern Zone. These zones had some rhyme or reason to them but I am not really sure what it was other than it seems to split the state into two halves on a line approximating the middle. Sometimes a picture or two really is worth a few thousand words. 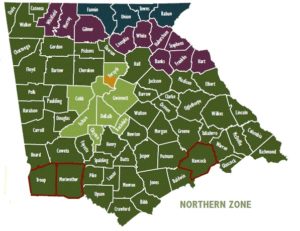 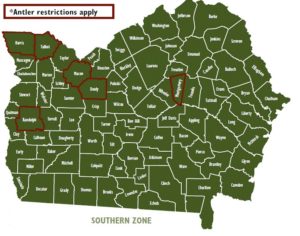 For years the regulations regarding hunting in the State of Georgia centered around which zone you were in. Several years ago the Department of Natural Resources (DNR) began to address some wildlife management on a county by county basis. Usually, these management regulations were limited to antler restrictions and doe days. Then in 2011 the legislature legalized hunting over bait and due to political wrangling, it was legalized in the southern zone only. Since that time there have been questions about legalizing baiting in the northern zone. It seems that hunters in the state wanted parity in the law, whether legal or illegal, to bait they wanted it to be the same statewide.

That brings us to the 2018 legislative session and SB450 which sought to legalize hunting over bait statewide by removing a stipulation that all supplemental feed be placed at least 200 yards away and out of a direct line of sight. The bill had a lot of opposition in the house and it failed to pass. Enter Governor Nathan Deal. On April 9, 2018, he issued an Executive Order that directed the DNR Board to address the issue of hunting over bait. You can read the EO below.


The DNR board held a few town hall meetings and invited public comment on the issue. Then on June 27, 2018, they voted to allow hunting over bait in the North. Sort of. I say sort of because the board cannot change the law, only the legislature can do that. So how did the board do it? Remember the Northern zone and Southern zone line I explained in the beginning? That line is within their control. They cannot eliminate it but they can decide where it is drawn so they did just that. The Southern Zone now consists of all private land in the state while the Northern Zone consists of all the land contained within the Chattahoochee National Forest.

Wait, what? Yes. Those of you in Rabun County that own property with a northern property line that is also the border between Georgia and North Carolina are now in the Southern Zone. All privately owned property is now considered Southern Zone regardless of actual geographic position within the state. You can read the exact wording of the proposal below.


So, why do I say this whole thing is asinine? Because the justification for Nathan Deal to interject himself into the state’s wildlife management practices was “parity in the law”. If parity in the law was truly the goal, why do we have doe days that vary by county? Why do we have seven counties that have an extended archery season that runs to January 31 when deer season ends for the rest of the state on the second Sunday in January? Why are there three bear hunting zones with vastly different rules in each zone? Why are there a few counties in far South Georgia that can hunt deer with dogs, but nowhere else in the state? I will tell you, it is because parity in the law isn’t the real issue. These differences exist because the state typically uses sound science-based wildlife management practices, in some instances, they do make decisions based on historical/traditional hunting practices. Not Governor Deal though, at a time when other states are banning the practice of baiting in an attempt to curb the spread of diseases like Cronic Wasting Disease (CWD), Bluetongue (BTV) and Hemorrhagic Disease (HD) our governor not satisfied that the people’s representatives did not change the law tosses it to a board that serves by his appointment.

COLUMN: Casey Cagle – The Guy Who Doesn’t ‘Get’ Government
COLUMN: The Villain is Always Self-Declared
Posting....