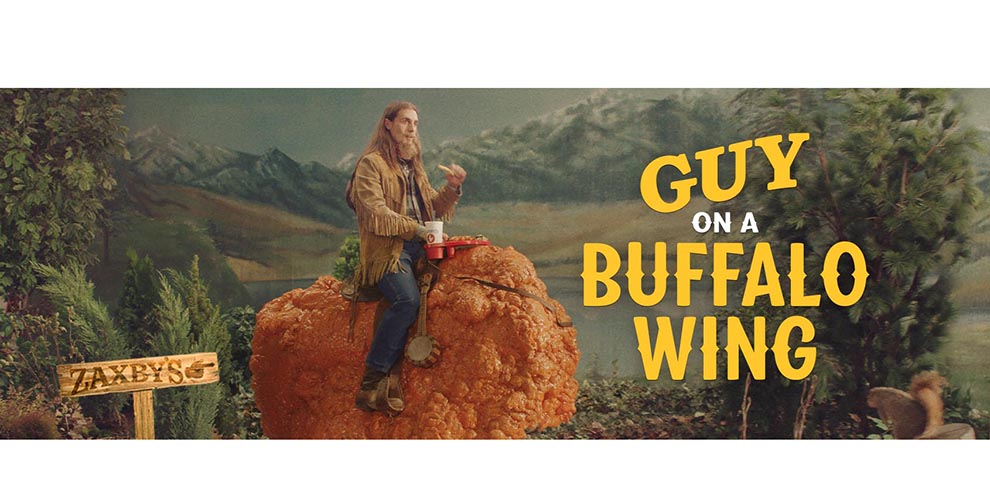 “Our new, bold Buffalo Garlic Blaze flavor profile was inspired by a culinary concept to incorporate aspects of spicy garlic and creamy style buffalo sauce, combining authentic ingredients such as peppers, vinegar and salt from hot sauce with fresh garlic and buttery notes to round out the flavor,” said Zaxby’s CMO Joel Bulger. “By originating the ‘Guy on a Buffalo Wing,’ we wanted to generate a campaign as memorable as our new sauce.”

Zaxby’s teased its new sauce with various trailers ahead of the CFP national championship game, leaving its Fanz guessing who is behind the “Guy on a Buffalo Wing.” The full spot launched during the championship broadcast, revealing a glimpse into a full 2 minutes and 20 seconds film that can be found on guyonabuffalowing.com.

The new “Guy on a Buffalo Wing” commercial follows a lone cowboy riding a Zaxby’s style buffalo wing who discovers a Boneless Wings Meal from Zaxby’s that features the new Buffalo Garlic Blaze sauce. The spot is narrated to a folk song, composed by the band Jomo & The Possum Posse, featuring quirky characters such as The Bobcat, The Squirrel, The Fox and The Hedgehog. 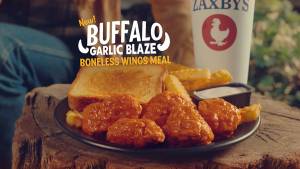 “With launching the new Buffalo Garlic Blaze sauce, we saw an opportunity to create a campaign that is a little unexpected while still staying true to Zaxby’s brand,” said Dooley Tombras, president at Zaxby’s creative agency of record, Tombras. “‘Guy on a Buffalo Wing’ is impossible to look away from, the kind of campaign that will make diners wonder what they’re missing and have to try it for themselves.”

Zaxby’s Fanz looking to find out more about the “Guy on a Buffalo Wing” and wanting to try the new Buffalo Garlic Blaze sauce can visit guyonabuffalowing.com.

About Zaxby’sFounded in 1990, Zaxby’s is committed to serving delicious chicken fingers, wings, sandwiches and salads in a fun, offbeat atmosphere where customers are considered friends. Zaxby’s iconic Signature Sandwich won Thrillist’s 2021 Fasties Award for Best Fried Chicken Sandwich. Zaxby’s has grown to more than 900 locations in 17 states and is headquartered in Athens, Georgia. For more information, visit zaxbys.com or zaxbysfranchising.com.