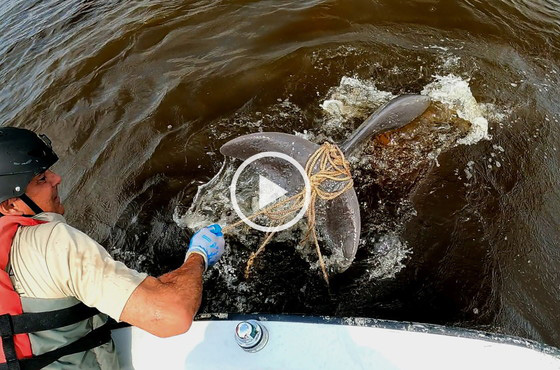 Watch the video below as DNR's Mark Dodd and others disentangle the mom dolphin. (Clay George/DNR)

Georgia Department of Natural Resources recently shared a video of a dolphin being freed from a trap. Enjoy the video and happy-ending-story below as she is released and reunited with her calf.

The dolphin had some 20 feet of rope wrapped around her tail. With the weight of the trap pulling her down, she struggled to surface and breathe. Her calf was swimming helpless nearby.

The four-person DNR team followed a basic plan: Snag the line. Control the tail. Cut the rope. All while hanging onto a panicked 300 lb mass of muscle. They had to work quickly and carefully.

In a matter of minutes, the team was successful in freeing the dolphin, who swam away rope-free. Her calf was quick to join her. 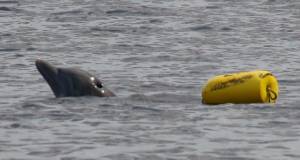 Weighed down by the crab trap, the entangled dolphin surfaces for air. (Ashley Raybould/DNR)

From the GA DNR Newsletter:

While involving a much more common species and on a much smaller scale, these incidents can still mean life or death for the animal. Or in a case this summer, an adult dolphin and her calf.

Alerted by DNR Range Safety Officer Kevin Michaud to a dolphin in trouble near Richmond Hill Aug. 4, senior wildlife biologist Clay George and crew arrived to find the buoy rope of a trap wrapped tightly around the dolphin’s tail.

With the weight of the trap pulling her under, she struggled to surface and breathe.

Most dolphin entanglements are straightforward. Not this one. “She had managed to roll and twist over 20 feet of rope around her tail,” George said.

Complicating matters, dolphins can die suddenly from the stress of being entangled. The quicker they’re released, the better. And this dolphin had a calf close by, one too young to survive alone.

The four-person team followed a basic plan. Snag the line. Control the tail. Loosen and determine where to cut the rope – fast. Slice carefully. All while hanging onto a thrashing 300-pound mass of muscle.

It worked. The dolphin swam away rope-free. Her calf quickly joined her.

“It’s the second case I can think of where we disentangled a mom while its calf swam around nearby,” George said.

Why dolphins get entangled is not clear. Some may be trying to steal the trap bait or playing with the rope or buoy, or maybe they’re accidently caught as they swim past.

While not common, entanglement also isn’t a freak occurrence. The Aug. 4 incident was the third crab-trap entanglement reported in Georgia this year and the only one that did not end in death. DNR has documented 29 confirmed and suspected entanglements since 2000. Of those, 43 percent of the dolphins died.

Fortunately, this dolphin had not been entangled long. When the crabber had checked the trap that morning, she wasn’t there.

WHY NOT CUT FIRST

Here’s why staff first loosen the rope and assess where to start cutting:

When dolphins are entangled in a crab trap buoy rope, the trap acts like an anchor. As the animal twists, rolls and pulls, the rope cinches tighter around them.

If you see an entangled, hurt or stranded dolphin, please report it immediately to DNR’s Marine Mammal Stranding Network, (800) 2-SAVE-ME (800-272-8363). Note the date, time, place and, if possible, the coordinates.