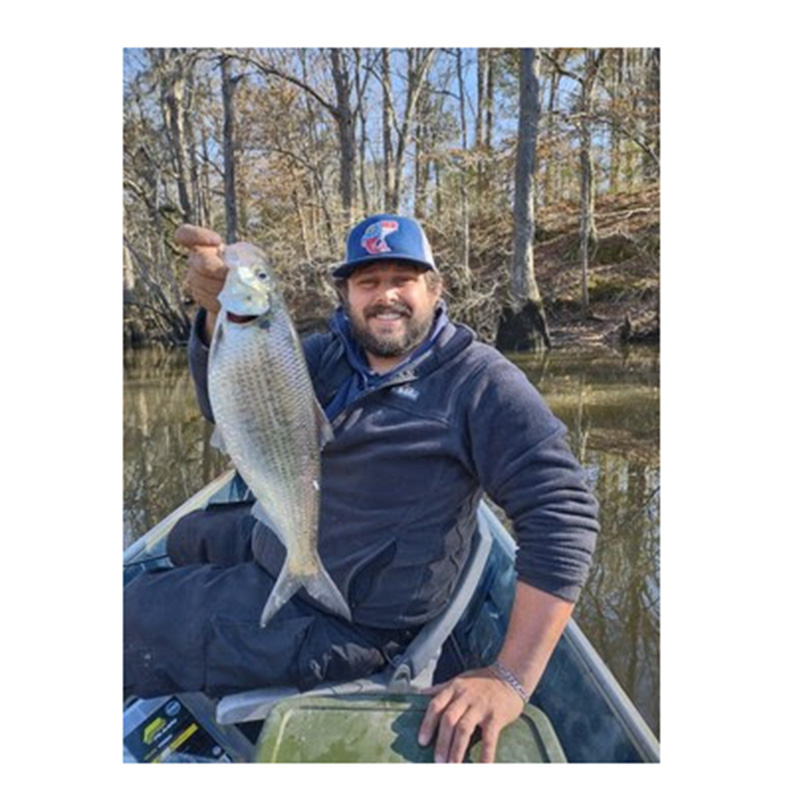 Timmy Woods of Kite, Georgia was out fishing on the Ogeechee River when he reeled in the new state record hickory shad.

“The Ogeechee River is the place to be if you are targeting record hickory shad,” says Scott Robinson, Chief of Fisheries for the Wildlife Resources Division.  “The great news is that there are amazing angling opportunities all over the state and plenty of fish to catch, but who will hold the next record? Don’t let someone else do it – it is time to get outdoors and Go Fish Georgia!”

Hickory shad (Alosa mediocris) are gray or green above with a silvery side, large prominent scales, a horizontal row of dark spots behind the gill cover, and a deeply forked tail. They are most similar to American shad and blueback herring, which have a lower jaw that is equal or only slightly projecting beyond the upper jaw. Gizzard and threadfin shad both have an elongated ray in the dorsal fin.

Both Hickory and American shad are anadromous species that spend most of their life in the Atlantic Ocean, and then return to their natal rivers to spawn once they reach sexual maturity. In Georgia, the shad spawning run usually begins in January in the southern rivers and fish can be found until May below the New Savannah Bluff Lock and Dam near Augusta. American and hickory shad are commercially harvested in the Altamaha and Savannah rivers. However, these fish can also be targeted by anglers utilizing recreational fishing gear in any of Georgia’s coastal rivers and are primarily caught on artificial lures, such as curl tail grubs. The Ogeechee River near the US Highway 80 Bridge and near the New Savannah Bluff Lock and Dam on the Savannah River are two of the more popular areas to target shad with recreational tackle. Are you a recreational hook and line angler that targets shad? WRD would love to know! Reach out to their office at 912-285-6094 and share your experiences.

Georgia anglers support fisheries conservation! Did you know that your license purchase allows Georgia WRD to continue to do important research, maintain and operate public fishing areas and more? Purchase a Georgia license at www.gooutdoorsgeorgia.com.

For fishing tips, be sure to check out the weekly Fishing Blog post at https://georgiawildlife.blog/category/fishing/.

Information about state-record fish, including an application and rules, can be found at https://georgiawildlife.com/fishing/recordprogram/rules or in the current Sport Fishing Regulations Guidebook.

11 Georgia Cities Rank in Top 100 Best Cities to Raise a Family in the South in 2022
Amendment to Saltwater Rules Allows for Billfish Landings in Georgia, First Time in 20 Years
Posting....