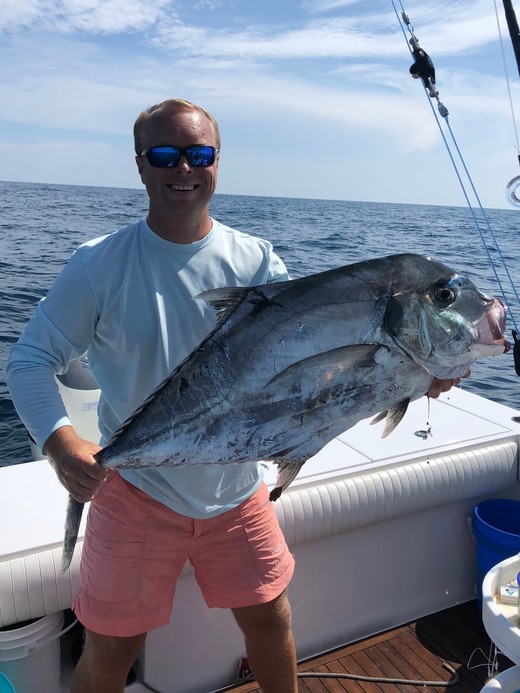 The Coastal Resources Division of the Georgia Department of Natural Resources announced Monday that a new men’s record had been set for the state saltwater gamefish for African pompano (Alectis ciliaris).

The prize goes to Mike McCullough, Jr. who landed the big catch on Aug. 11, 2018 near Navy tower R7 off the coast of Savannah.

McCullough, of Savannah, caught the 23-pound, 14.4-ounce African pompano using a four-ounce bucktail with live pogie. According to the Georigia Department of Natural Resources, this is the first record for an African pompano, and the minimum size to be considered was 20 pounds. McCullough’s catch was weighed by Sisson Scale and Equipment Co. of Savannah using a certified scale.

McCullough will receive a certificate acknowledging his record catch, and the record will be added to the list published at CoastalGaDNR.org/RecreationalFishing. It will also be included in the 2020 Georgia Sport Fishing Regulations guide.

The African pompano is a schooling predatory fish which takes predominantly a variety of crustaceans and they are preyed upon by larger fish, including mackerel and tunas, as well as sharks.

The all tackle world record for the species stands at 50lb 8oz taken off of Daytona Beach, Florida in 1990. In Florida, the species has a minimum size limit of 24 inches and only two fish are allowed per vessel per day.

Want to see if you beat a record?

For the current list of men’s and women’s saltwater fishing records, as well as information on how to submit a catch to the Georgia Saltwater Gamefish Record, please visit CoastalGaDNR.org/RecreationalFishing. Applications should include color photographs. There are minimum weights for several species.

Anglers wishing to enter a fish for a new state record must have the fish weighed on a Georgia Department of Agriculture certified scale in the presence of at least one witness. Certified scales can be found at local seafood markets, grocery stores and agricultural supply stores.  During business hours, anglers can have their catch weighed at the Coastal Regional Headquarters, One Conservation Way in Brunswick.

Report: 1/3 of US Men Are Married Fathers, 10% Have Children with More than One Person
GA DNR Offers Ways to Handle Flightless Geese
Posting....