The Georgia Department of Natural Resources says surging flocks of finches at backyard feeders coupled with reports of sick birds are raising questions among wildlife lovers across Georgia. 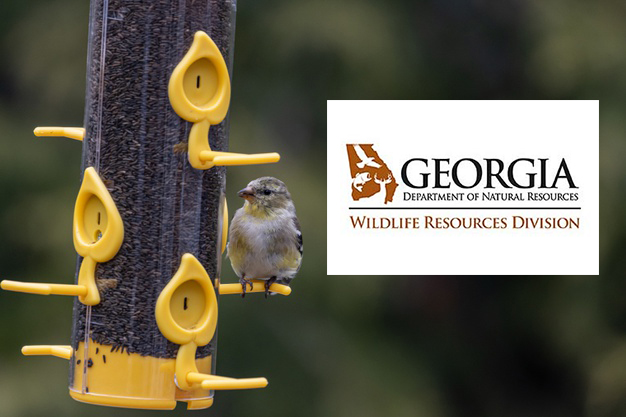 The Georgia Department of Natural Resources(DNR) says surging flocks of finches at backyard feeders coupled with reports of sick birds are raising questions among wildlife lovers across Georgia. Is the state is seeing an outbreak of salmonellosis, similar to the salmonella bacteria that is sickening and killing birds in the western U.S.?

Insight and advice from Ga DNR: Dr. Bob Sargent of the Georgia Department of Natural Resources said that scattered flare-ups of salmonella are occurring in some Southeastern states, including Georgia, and mostly in urban areas. However, he does not recommend that people stop feeding birds and remove feeders simply because they hear about problems elsewhere in the state or region.

“Heightened attentiveness to backyard bird behavior and to bird feeder hygiene are always important, and especially so right now,” said Sargent, an ornithologist and program manager with DNR’s Wildlife Conservation Section. “But you do not necessarily need to shut down your feeders unless you or others in your community are actually seeing sick birds.”

The situation is two-fold, he explained. Here’s why and what Georgia bird watchers can do.

First, this has been an irruption winter for finches, particularly for purple finches and pine siskins. These “invasion movements” occur about every seven to 10 years. They happen when several years of abundant foods boost bird numbers, and are then followed by a downturn in those resources that causes the animals to range farther to find food in winter.

Irruptions often involve some finch and waxwing species because these birds, which breed in the northern U.S., Canada and high-elevation forests such as in the Appalachian Mountains, thrive on food sources that fail every few years. Pine siskins, for example, are especially dependent on the seeds and fruits of cone-bearing trees. With production of these foods in the boreal forest in a “bust” cycle, pine siskins have swarmed farther south than usual this winter—and are crowding Georgia feeders.

The added number of birds at feeders has, in turn, increased the risk and occurrence of disease.

All of these diseases and their spread have been associated with congregations of birds at feeders.

“Most of the calls about sick birds this winter have come from urban areas,” Sargent said. “This suggests the problem isn’t a matter of concentrated feeders in a few yards; it might be a matter of the high concentration of feeders in the yards of many homes in close proximity to each other.”

Bacterial diseases often are transmitted orally or through the accumulation of fecal matter beneath feeders, according to Sargent. The diseases noted have been detected in house sparrows, finches and many other bird species, and do occasionally appear when large numbers of birds crowd around feeders during winter and other times of the year when natural foods are in short supply. Birds infected with salmonella often act lethargic and are easily approached. Other infected birds may show no symptoms.

Fungal issues such as aspergillosis, which can cause respiratory distress in birds, are often the result of a buildup of wet and moldy seed hulls beneath feeders. Birds suffering from avian pox have wart-like lesions on their face, legs or feet. These lesions can weaken the birds and compromise their ability to breathe and feed. Avian pox can be transmitted from bird to bird by mosquitos, as well as between sick and healthy birds at feeders.

Birds with conjunctivitis have crusty-looking eyes, may lose their sight and often remain perched on feeders even when approached. Transmission of conjunctivitis could happen between birds crowding at feeders.

Illness observed in birds at feeders often can be traced to a lack of hygienic measures on and around the feeders. This is where people who feed birds can make a difference. Sargent recommends the following:

But what to do if you or neighbors see sick birds at your feeders?
Sargent said if this occurs you can help prevent the spread of disease by taking down the feeders for a week, which will encourage birds to disperse. If you observe several sick or dead birds, you can also report the situation to DNR’s Wildlife Conservation Section office in Forsyth (478-994-1438).

However, if the feeders and feeding areas are being regularly cleaned, and you and your bird-feeding neighbors have not seen any sick birds, Sargent advises leaving feeders up and full to help wintering finches and other backyard birds survive.

Visit feederwatch.org/learn/sick-birds-and-bird-diseases for more on bird diseases. Homeowners who find a sick bird that is incapacitated can turn to georgiawildlife.com/sick-injured-or-orphaned-wildlife for a list of licensed rehabilitators.

DNR’s Wildlife Conservation Section works to conserve songbirds and other wildlife not legally fished for or hunted, as well as rare plants and natural habitats. The agency does this largely through public support from fundraisers, grants and contributions.

Key fundraisers include sales of the eagle and monarch butterfly license plates, as well as annual renewals of these and the ruby-throated hummingbird tags. These plates cost only $25 more than a standard plate to buy or renew. Up to $20 of that fee goes to help wildlife.

Supporters also can donate online at gooutdoorsgeorgia.com. Click “Licenses and Permits” and log in. (New customers will need to create an account.) Learn more at georgiawildlife.com/donations. Visit georgiawildlife.com/conservation/annualreport to see how your support is put to work.