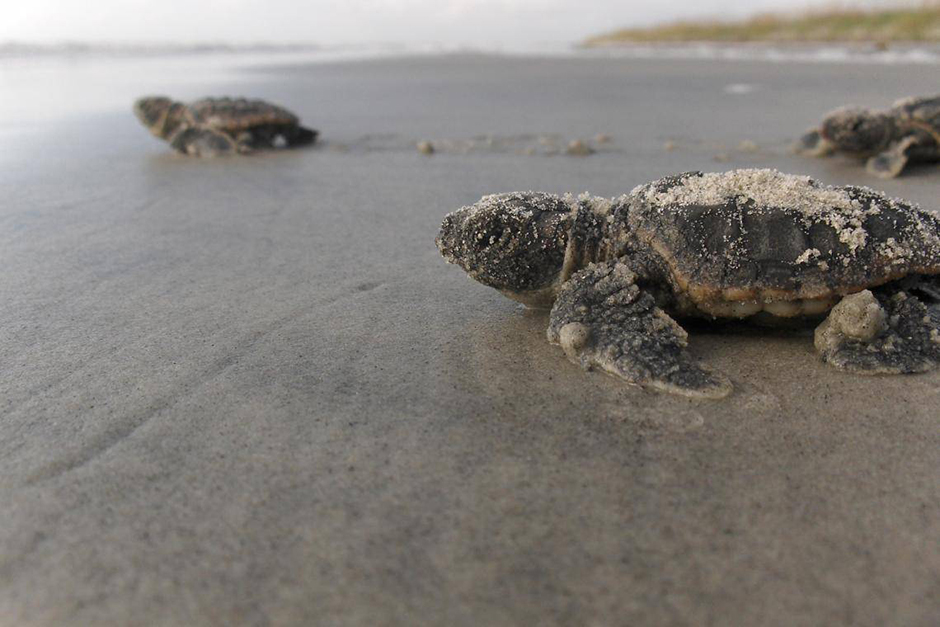 The annual cycle of these massive turtles returning to beaches in the Southeast to lay their eggs began early this morning with a nest on Sea Island and four on Cumberland Island. All were found by members of the Georgia Sea Turtle Cooperative, a DNR-coordinated network of about 200 volunteers, researchers and agency employees that patrols beaches daily during nesting season.

The rush for first nest of the year may have been unusual but not the timing. Georgia Sea Turtle Program Coordinator Mark Dodd said first nests “come like clockwork … around the first of May.”

While predicting how the season will go is anyone’s guess, computer modeling of loggerhead nesting in the region points to an average year, according to Dodd, a senior wildlife biologist with the Georgia Department of Natural Resources. “Somewhere around 3,000 to 4,000 nests,” he said.

The Georgia record since comprehensive nesting surveys began on the state’s barrier island beaches in 1989 is 3,950 nests, set in 2019. The count in 2020 dipped to 2,786 nests and last year to 2,493 (plus another seven nests mostly from species other than loggerheads).
The loggerhead population has been increasing at approximately 4 percent annually since the early 1990s. However, a new population model developed by UGA and the U.S. Geological Survey using nesting and genetics data indicates the population will plateau at current levels for about the next 20 years, its progress hindered by low recruitment during the early 2000s, Dodd said. If current protections remain in place at least through that period, the model suggests loggerhead numbers would then start to increase again, possibly reaching levels not seen since the late 1950s.

Supporting that rebound is the goal of Georgia’s Sea Turtle Cooperative. Working under a federal permit, members mark, monitor and protect all loggerhead nests, plus those of other species that seldom nest in Georgia, such as green and Kemp’s ridley.

“The cooperative has done a tremendous amount of work,” and with a measurable impact, Dodd said. “We started out averaging about 800 nests a year and we’re now up to about 3,500.”

Like other marine turtles, loggerheads – named for their large heads – crawl ashore on barrier island beaches, dig a hole at the base of the dunes and lay their eggs, usually at night.

To prep for the season, Dodd and staff have been training interns, working with volunteers, partner agencies and organizations, and teaming with DNR’s Law Enforcement Division, all while navigating social distancing and other requirements involving the coronavirus pandemic. Game wardens enforce regulations including the use of turtle excluder devices, or TEDs, in commercial shrimping.

The process followed this morning on Cumberland and Sea islands will be repeated hundreds of times this year. An egg from each nest – less than 1 percent of the average clutch size on the island – was collected for UGA genetic analysis documenting the number and relatedness of loggerheads nesting in Georgia. The nest was then covered with a screen to protect the eggs from predators.

Key fundraisers include sales of the monarch butterfly license plates and sales and renewals of bald eagle plate and older designs, such as the ruby-throated hummingbird. These tags cost only $25 more than a standard plate to buy or renew. Up to $20 of that fee goes to help wildlife.

All marine turtles in Georgia are protected by state and federal law. To help conserve these species:

LOGGERHEADS AT A GLANCE