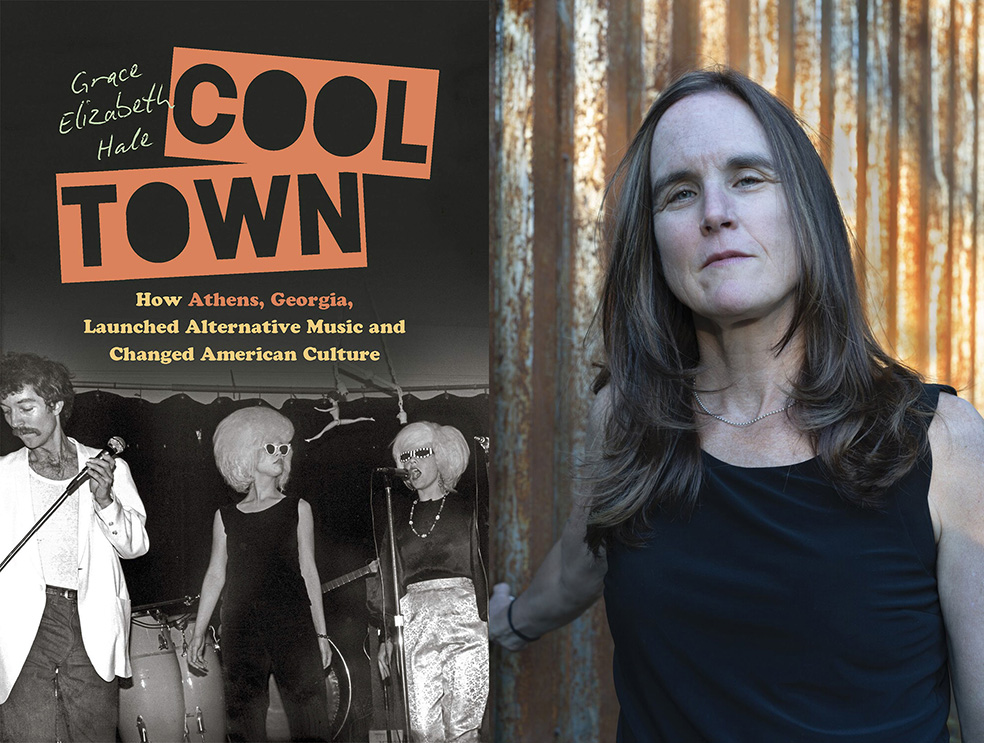 The Georgia Historical Society announced recently that Dr. Grace Elizabeth Hale has been awarded the 2021 Malcolm Bell, Jr. and Muriel Barrow Bell Award for the best book on Georgia history published in 2020 for her book, Cool Town: How Athens, Georgia, Launched Alternative Music and Changed American Culture (University of North Carolina Press, 2020). The award was presented during a private luncheon hosted by Vince and Barbara Dooley at their home in Athens.

“Grace Hale’s remarkable book on Athens, and by extension Georgia, as a center of musical artistry is a wonderful scholarly achievement,” says W. Todd Groce, President of the Georgia Historical Society. “She proves conclusively that the South is still the birthplace of American music and that New York and Boston are not the exclusive purveyors of national culture and creativity.”

The Bell Award, established in 1992, is the highest publication award given by the Georgia Historical Society. It recognizes the best book on Georgia history published in the previous year. The award is named in honor of Malcolm Bell, Jr. and Muriel Barrow Bell in recognition of their contributions to the recording of Georgia’s history.

The GHS Publication Awards Committee noted that “Grace Elizabeth Hale’s Cool Town: How Athens, Georgia, Launched Alternative Music and Changed American Culture is very much a story of a small Georgia town that transcended its provinciality and, however improbably, influenced American music for more than two decades. Hale writes evocatively, documenting how Athens became Athens and a model for college towns across the country. In doing so, she illuminates modern Georgia history as well as offers new insights on American culture during the waning decades of the twentieth century.”

Grace Elizabeth Hale is the Commonwealth Professor of American Studies and History at the University of Virginia. She is the author of A Nation of Outsiders: How the White Middle Class Fell in Love with Rebellion in Postwar America (Oxford Univ Press, 2011), Making Whiteness: The Culture of Segregation in the South, 1890-1940 (New York: Pantheon, 1998) (New York: Vintage, 1999), and the forthcoming The Lyncher in the Family: Reckoning with My Mississippi Grandfather and the Intimate History of White Supremacy (New York: Houghton Mifflin Harcourt, 2022).

For more information about the Malcolm Bell, Jr. and Muriel Barrow Bell Award please contact Pattye Meagher, Director of Communications, at 912.651.2125, ext. 153 or by email at pmeagher@outlook.com. For a list of past recipients of the Bell Award please visit our website at georgiahistory.com.

About the Book (from University of North Carolina Press):

In the summer of 1978, the B-52’s conquered the New York underground. A year later, the band’s self-titled debut album burst onto the Billboard charts, capturing the imagination of fans and music critics worldwide. The fact that the group had formed in the sleepy southern college town of Athens, Georgia, only increased the fascination. Soon, more Athens bands followed the B-52’s into the vanguard of the new American music that would come to be known as “alternative,” including R.E.M., who catapulted over the course of the 1980s to the top of the musical mainstream. As acts like the B-52’s, R.E.M., and Pylon drew the eyes of New York tastemakers southward, they discovered in Athens an unexpected mecca of music, experimental art, DIY spirit, and progressive politics–a creative underground as vibrant as any to be found in the country’s major cities.

In Athens in the eighties, if you were young and willing to live without much money, anything seemed possible. Cool Town reveals the passion, vitality, and enduring significance of a bohemian scene that became a model for others to follow. Grace Elizabeth Hale experienced the Athens scene as a student, small-business owner, and band member. Blending personal recollection with a historian’s eye, she reconstructs the networks of bands, artists, and friends that drew on the things at hand to make a new art of the possible, transforming American culture along the way. In a story full of music and brimming with hope, Hale shows how an unlikely cast of characters in an unlikely place made a surprising and beautiful new world.