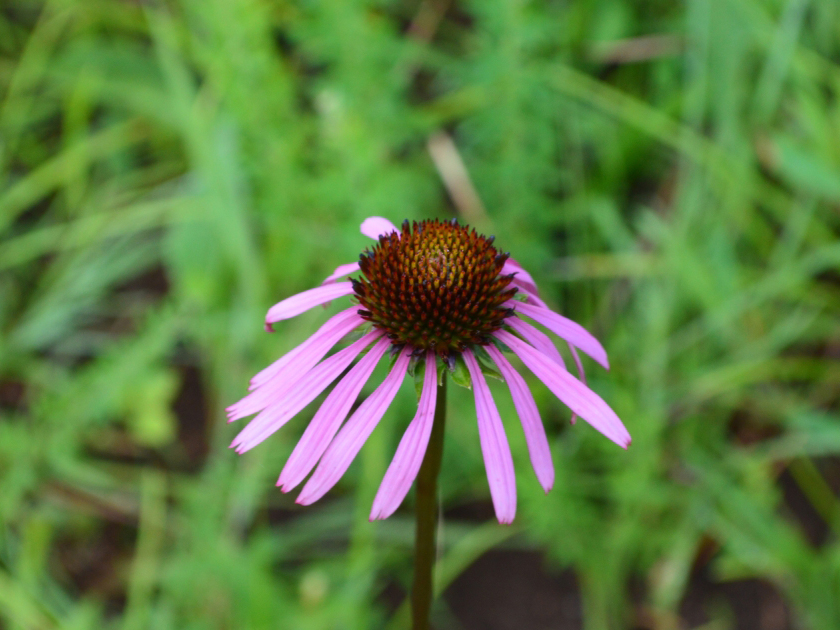 After more than 25 years of work by conservationists, the imperiled smooth coneflower has reached a recovery milestone: a downlisting from endangered to threatened under the federal Endangered Species Act

Project partners initially weren’t sure they would succeed, said Lisa Kruse, senior botanist with the Georgia Department of Natural Resources. “But we were determined to make as much of a difference as we could. The downlisting signals that the coneflower is actually recovering in the landscape.”
Smooth coneflower is a purple-blooming wildflower with hula skirt-like petals found in small enclaves in the Southeast, from Georgia through the Carolinas and into Virginia. In Georgia, thanks to the exhaustive efforts of partners including the U.S. Fish and Wildlife Service, U.S. Forest Service, DNR, the State Botanical Garden of Georgia and Atlanta Botanical Garden, the plant has gained a stronger foothold on Currahee Mountain, part of the Chattahoochee National Forest near Toccoa.

Even during the best of times, smooth coneflower would have been confined to a few pockets in north Georgia. The flower has adapted to survive in the rocky, mineral heavy of soil of pine-oak-hickory woodlands. However, fire played an essential role.
The suppression of fires since the early 20th century led to the rare plant becoming scarcer. Smooth coneflower thrives in open, sunlit areas. Regular fires, whether from naturally occurring sources such as lightning strikes or from burns set by Native Americans, helped create and maintain these openings. As those fires became less common, the tree canopies began to close in, blocking sunlight from the forest floor and choking out smooth coneflower, which is not a vigorous competitor in the shade.
Botanists realized that a creative approach was needed for smooth coneflower to survive. Combining the experience of land managers, ecologists and botanists, the Georgia Plant Conservation Alliance, a network focused on saving rare plants, developed a plan to grow smooth coneflower in protected gardens, restore the habitat and return the plants to natural sites to gradually build populations.

“Being consistent with periodic prescribed fires at the landscape-scale on a three-year rotation has been critical to restoring habitat for this species,” explained Mike Brod, Forest Service staff officer for fire and natural resources. “We found that prescribed fire coupled with the manual cutting of competing vegetation is needed for the plant to thrive. We have been implementing these restoration treatments on (Chattahoochee National Forest) for more than 20 years and are continuing to see these populations expand.”

Beginning in about 2005, partners began thinning trees, using herbicides on targeted plants and conducting controlled burns to open what were once sunnier sites. The transformation to an open woodland took time.
Botanists also began propagating the plant in botanical gardens. Unlike other rare plants, this process for smooth coneflower is relatively easy, said Heather Alley, program manager at the State Botanical Garden in Athens. But the work requires care. Botanists gathered a diverse pool of genetic material to propagate the plant and preserve the limited genetics of existing wild populations.

The result in Georgia is that smooth coneflower has expanded from a few isolated patches of individual plants to stable populations. That recovery has been powered by the collaboration, communication and continuity of conservationists, a partnership facilitated largely by the Georgia Plant Conservation Alliance. This group of 54 parks, agencies, academic institutions, utility companies and environmental organizations is engaged in plant recovery projects including 112 species, 29 of them federally listed.
Carrie Radcliffe, conservation partnerships manager at Atlanta Botanical Garden, said the success is built on relationships within the alliance “and leverages the expertise and skills of each partner organization involved.” “This work is synergistic and amounts to much more than the sum of each individual institution’s effort.”
Jennifer Ceska, conservation coordinator at the State Botanical Garden at the University of Georgia, described that synergy between GPCA members as “remarkable.” “Partners show up and work hard on behalf of imperiled plant species year after year for decades,” Ceska said. “While smooth coneflower has been downlisted, these partners will continue their work.”

The struggle for the smooth coneflower isn’t over. The wildflower is one of 14 plant species targeted in a federal Recovery Challenge grant that is helping fund work by DNR and partners. Yet the progress is significant. When listed as endangered in 1992, there were 21 smooth coneflower populations, all considered vulnerable and unstable. Now there are 44 distinct populations, 16 of which – including the one at Currahee Mountain – are healthy and on protected lands.
Mincy Moffett, a Fish and Wildlife Service biologist who has worked with the plant since the start of the conservation effort, is cautiously optimistic.
“This is a remarkable achievement highlighting not only the power partnerships, but also the creativity, flexibility and dogged perseverance necessary for success,” Moffett said. “Conservation threats are endless. So too must be our conservation efforts and vigilance.”