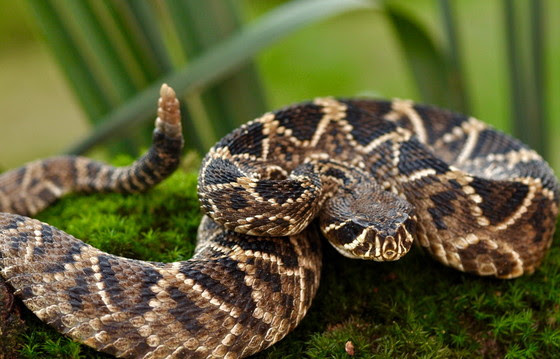 Georgia Department of Natural Resources reports that the 2022 Whigham Rattlesnake Roundup in Grady County will not have wild-caught rattlesnakes for the first time in 62 years:

While the name remains the same, this year’s Whigham Rattlesnake Roundup features a significant change that will benefit the southwest Georgia community and wildlife conservation.

The event set for March 5 in the small Grady County town will not include wild-caught rattlesnakes or products made from rattlers, a first since its start in 1960. Whigham had been the last rattler roundup in Georgia, after Claxton’s Rattlesnake and Wildlife Festival made a similar move 10 years ago.

Wildlife organizations welcomed Whigham’s announcement. Roundups have contributed to the decline of rattlesnakes such as the eastern diamondback, the largest rattler species. Habitats and other animals also have been harmed by the now illegal practice of gassing gopher tortoise burrows to collect snakes.

For the Whigham Community Club, however, the driving concern was “still being viable so we are able to give to the community,” past president Greg Ponder said. The 72-year-old club uses the money raised to meet local needs, from supporting Boy Scouts and Whigham school trips, facilities and sports teams to helping sponsor county livestock shows and answer other community requests.

While COVID cancelled the 2021 event, in recent years the number of rattlesnakes had dwindled. The problem: fewer snake hunters and rattlers, Ponder said. Yet to draw a crowd, he added, “we must have snakes.”

With help from Chehaw, Southeastern Reptile Rescue and DNR, the club will this year. The provision of rattlers and other native snakes will underpin an educational focus on the reptiles and the ecological roles they fill.

DNR senior wildlife biologist Daniel Sollenberger is thrilled about the change in the event, calling it a plus for snake conservation. “We are happy to be able to participate with the Whigham Community Club this year and show our support for another pro-wildlife conservation festival in Georgia.”

Ponder said the support is appreciated. The club’s hopes for what is promoted on Facebook as a no-kill event include a large crowd and a bright future. “We’re working to keep this thing going.”