Poll Finds Nearly One in 10 People Believe They Had Covid-19 in Last 30 Days, But Few Were Tested

Nearly one in 10 people believe they may have had COVID-19 within the past 30 days, but only 7% received a test that could have confirmed their suspicions 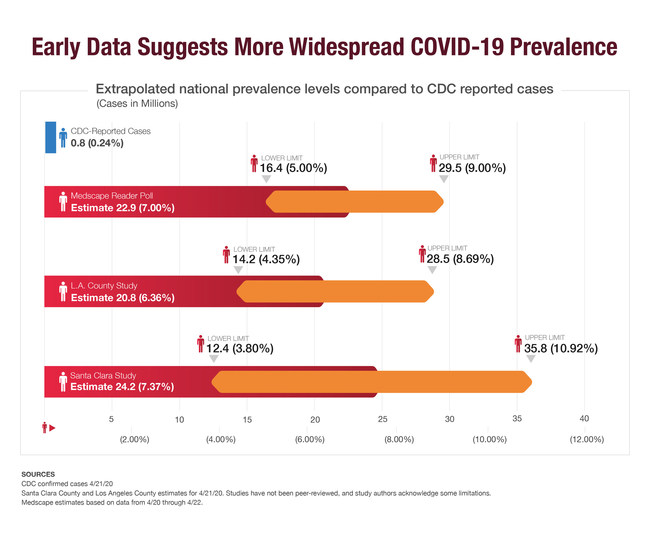 Nearly one in 10 people believe they may have had COVID-19 within the past 30 days, but only 7% received a test that could have confirmed their suspicions, according to a new poll from WebMD. Among the 7% who were tested, about two-thirds were positive for Covid-19, and one-third were negative.

The percentage who suspected they had Covid-19 in the past 30 days was even higher in the New York City area, where the poll suggests 26% of New York City area residents are positive for Covid-19. Early antibody testing from New York City showed an infection rate of 21.2% in the city. New York has the largest number of cases in the U.S.

More than 6,300 responded to an online reader poll conducted April 20-21 which asked about symptoms and experiences with COVID-19 testing.

Among those who said they had symptoms, the most common included cough, loss of sense of smell or taste, body aches, diarrhea, headache, sore throat, and fatigue.  A significant percentage reported shortness of breath and fever.

Nearly two-thirds described the symptoms as mild, 33% as moderate, and 6% as severe.

The WebMD poll findings underscore the ongoing difficulties people have had getting tested and the ability to determine actual disease prevalence in the U.S.

A separate reader poll of 1,451 U.S. physicians conducted by Medscape found that 80% believe the actual numbers of people infected with Covid-19 are higher than official reports. About 20% said they believe the figure is between 3% and 4%.

The confirmed case count from the Centers for Disease Control and Prevention (CDC) is at 0.2% of the population nationwide and 1.2% of the New York State population, but only 5% of U.S. physicians said they thought the official numbers were accurate.

Most physicians, 75%, said they did not practice in a known hot spot.

The reader polls mirror the results of recent studies, which show that infection with SARS-CoV-2, the coronavirus that causes COVID-19, may be higher than reported.  One recent study from the Los Angeles County Department of Public Health found that the number of residents infected with the virus in that county is 28 to 55 times higher than the 8,000 cases that were confirmed when the study was done in early April. The study results have not yet been peer-reviewed.

“The survey demonstrates the need to ramp up diagnostic testing, along with antibody testing, to fully understand the scope of the disease,” says John Whyte, MD, WebMD’s chief medical officer.

He said the new numbers can help guide policy decisions as officials determine about how and when to relax social distancing guidelines.