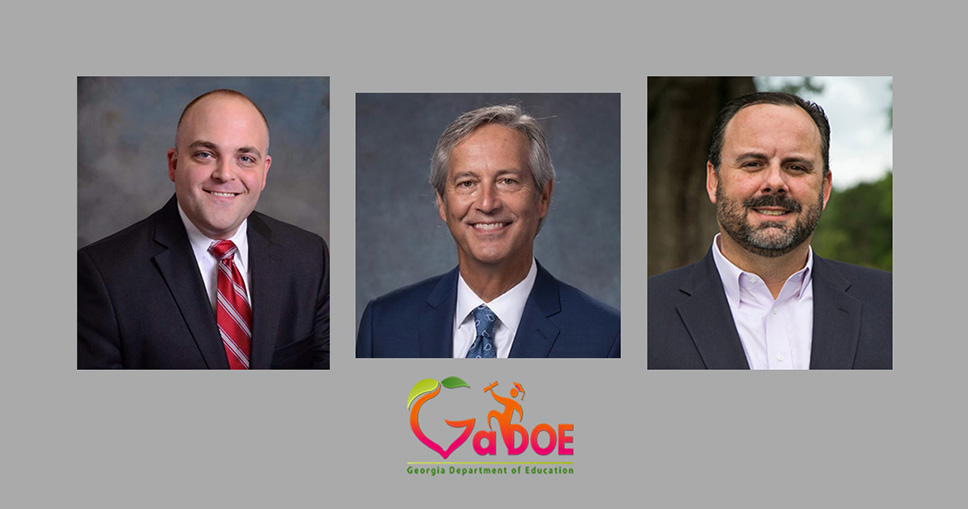 “I look forward to working with Jason and Stan to continue expanding opportunities for every student in Georgia’s K-12 public schools,” State School Superintendent Richard Woods said. “I appreciate their dedication to student- and classroom-centered decision-making.”

Jason Downey was appointed by Governor Brian Kemp as the 8th Congressional District’s member of the State Board of Education in April 2019, and previously served on the Macon-Bibb County Board of Education from 2013 to 2017 where he held the positions of Vice-Chairman, Treasurer, and Legislative Liaison.

Downey graduated in 2000 from Marshall University in West Virginia with a Bachelor of Arts in Communication Studies, and in 2003 from Mercer University Walter F. George School of Law with his J.D. He currently practices law with Morgan & Morgan Law Firm in Macon, Georgia. Downey is married to Connie who has been an elementary school counselor in Jones County for over 20 years. They live in Jones County with their daughter Cate.

“It is an honor to serve on Georgia’s Board of Education and as the next Chairman,” Downey said. “I will continue to bring my passion for public education to this new role, and work with Superintendent Richard Woods, Governor Kemp, and my fellow board members to support our students, educators, and families in Georgia’s public schools.”

Dr. Stan DeJarnett was appointed by Governor Brian Kemp as the Tenth Congressional District Representative to the State Board of Education. He served for over 30 years as an educator in Georgia public schools as a music teacher, curriculum specialist, principal, and district leader. Prior to retirement, he served as Superintendent of the Morgan County Charter School System in Madison. Additionally, DeJarnett served for eight years as the Director of the Georgia Vision Project, a statewide initiative committed to promoting and improving public education. He has served in several leadership roles at the state and national level. He was elected by his colleagues to serve on the National Governing Board of the American Association of School Administrators (AASA). He also represented Georgia at the National Center for Education, Research and Technology (NCERT).

Dr. DeJarnett received his Bachelor’s and Master’s Degrees from Western Carolina University and his Doctorate in Educational Leadership from The University of Georgia. He is active in his community, having served on the boards of the Morgan County Foundation for Excellence, Ferst Readers, Boys & Girls Club of Morgan County and the Madison-Morgan Cultural Center. He and his wife Kaye have three daughters and four grandchildren.

“It is an honor to serve as Vice-Chair of the State Board,” Dr. DeJarnett said. “I look forward to working collaboratively with Jason Downey, the members of the Board, Superintendent Woods and his staff. We are committed to ensuring a bright future for Georgia’s students and the educators who instruct them.”

Governor Kemp also appointed a new member to the board to represent the 2nd Congressional District, filling the vacancy created by the passing of Dr. David “Butch” Mosely. William Franklin “Frank” Griffin, Jr. serves as President of Flint Community Bancshares, Inc., and as President and Chief Lending Officer of Flint Community Bank. Griffin graduated from Georgia Southwestern State University with a Bachelor of Science degree in Political Science (1996) and is also a graduate of the Graduate School of Banking at Louisiana State University (2011).