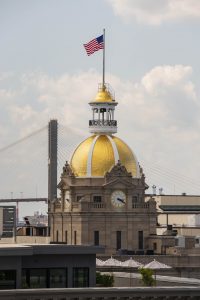 Georgia Southern University’s latest Economic Monitor, which reflects Q1 2022, reports that growth in the Savannah metro economy moderated during the opening quarter of the year.

“The broadest indicators of economic activity — overall regional employment and electricity sales to residential, industrial and commercial users — continue to signal strength,” stated Michael Toma, Ph.D., Georgia Southern’s Fuller E. Callaway Professor of Economics. “After good performance in the fourth quarter, there was a mild pull-back during the first quarter in tourism and port activity. In general, the regional economy maintained its forward momentum, but slowed its rate of acceleration.

Toma also noted that the Savannah metro economy will grow approximately 2% through the remainder of 2022, noticeably slower as compared to the rebound year of 2021. The economic future is somewhat murkier now as inflation surges, the Federal Reserve tightens, and global energy and commodities markets remain rocked by Russia’s invasion of Ukraine, he said.

Overall Strength, but Some Sectoral Weakness

The business index for the Savannah metro economy increased 1.3% in the opening quarter of 2022, roughly half the pace of the previous quarter. The index of current economic activity increased to 207.3 from 204.7. The index was buoyed by solid employment growth of 1.6% during the quarter and electricity sales growth of 2.1%. Indicators of port activity, tourism and retail sales slowed during the quarter.

The Georgia Department of Labor recently completed its annual benchmarking process for employment in which the monthly payroll survey data is benchmarked against headcount data. Total employment data did not change significantly but business and professional industry services were revised downward while the information sector, including the film and entertainment industry, was revised upward substantially.

Service sector employment added 2,800 jobs. Business and professional services surged again, adding 1,700 workers, bringing the two-quarter gain to 3,100 jobs. Logistics added 300 jobs, rising to 17,800, even though container throughput fell 8% from its fourth-quarter level. Container throughput, however, remains up about 3% from the previous year.

Indicators of the regional tourism industry were mixed in the first quarter. Inflation-adjusted hotel and motel sales tax receipts were down 3% while boardings at the airport declined 5% compared to the previous quarter. Auto rental sales tax collections were down about 10%. Nonetheless, the tourism and hospitality sector added 800 workers and reached 27,200 in total. The two-quarter gain is 1,800 jobs and only 100 workers below its pre-pandemic peak. The sector moved ahead of the education and health division to reclaim the number two spot on the list of the region’s largest sectors.

On the goods-producing side of the economy, manufacturing added 300 jobs rising to 18,400 workers. Manufacturing has added 1,400 workers since the pandemic low in 2020. Construction employment increased 100 workers, rising to 8,300 jobs.

Tightness in the regional labor market continues to spur substantial increases in private sector wages. After adjusting for inflation, hourly wages were 5.6% higher than one year ago. The gains in nominal terms (+14%) are remarkable, but also follow a period of stubbornly stagnant wage growth through the first half of 2021. The seasonal and inflation adjusted hourly wage increased 1.9% to $25.48 from $25.01 in the previous quarter.

The seasonally adjusted number of single-family homes permitted for construction increased 10%, reversing the 16% decline in the fourth quarter. The number of permits issued increased to 651 from 590 units in the previous quarter. The average valuation per single-family unit decreased 1.7% to $259,000 from $263,000.

The Savannah area business forecasting index surged 5.9% during the first quarter. The leading index increased to 182.5 from 172.3. The gain primarily reflects momentum from improvement in the labor market, even though first-time claims for unemployment insurance did increase at the end of the quarter. Housing market indicators were generally favorable.

With respect to the labor market, the number of initial claims for unemployment insurance (UI) increased 24% from 630 to 784 during the previous quarter. Accordingly, the seasonally adjusted unemployment rate recorded a one-quarter increase to 3.3% from 3.2%. The unemployment rate was 4.8% in the first quarter of 2021.

The surging forecasting index is reading artificially high primarily because of favorable momentum in the movement of UI claims. However, given normalization of the labor market and increasing UI claims and unemployment rate at the end of the quarter, the forecasting index will revert more closely to its longer-term trend in the second quarter, and therefore should not be interpreted this quarter as signaling surging growth in the regional economy in 2022.

Near-term prospects for growth in the Savannah metro economy are reasonably good. Overall indicators of the health of the regional economy suggest it remains fundamentally sound, but several important sectors, namely logistics and tourism, wavered during the first quarter. Wage growth was exceptionally good but tempered by a modest shortening of the workweek. Lastly, Federal Reserve tightening of monetary policy to fight inflation and continued supply chain and commodity price spikes threaten to stall the U.S. economy. Continue monitoring economic conditions closely through the remainder of 2022.

A Note from the Analyst

The Economic Monitor is available by email and at the Center’s website. If you would like to receive the Monitor by email send a ‘subscribe’ message to CBAER@georgiasouthern.edu.

The Economic Monitor provides a continuously updated quarterly snapshot of the Savannah Metropolitan Statistical Area economy, including Bryan, Chatham and Effingham counties in Georgia. The coincident index measures the current economic heartbeat of the region. The leading index is designed to provide a short-term forecast of the region’s economic activity in the upcoming six to nine months.