From Bogotá to Statesboro, graduate Daniel Castro designs his future at GSU 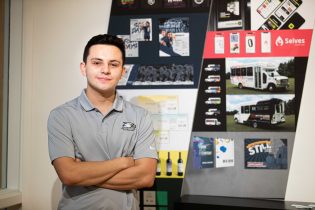 When Daniel Castro’s daily routine shifted from Bogotá, Colombia, a sprawling, capital city surrounded by the Andes Mountains, to the plains of Statesboro, Georgia, he was excited for new opportunities as an international student at Georgia Southern University.

Castro long wanted to attend college in the U.S. and worked with an agency in Bogotá to explore various institutions with solid graphic design degree programs.

“Georgia Southern was one of the one options and the one I liked best,” said Castro. “I liked the location and the graphic design program was really interesting. I was also looking at pictures of the campus and things around here.”

He earned an International Student Diversity Scholarship from Georgia Southern, and in August 2017 eagerly arrived at the Statesboro Campus with his parents to settle into a residence hall in Eagle Village. Yet soon after they left, Castro, an adventurous traveler who loves to discover new places and people, found himself unsteady in new surroundings.

“One of the experiences I remember the most is how homesick I got,” said Castro. “In Colombia, we stay home until we graduate from university. Being on my own was kind of shocking.”

The language barrier was also tough.

“It was hard for me to communicate with my roommates, who were all American,” he said. “I was shy at first. I was scared to use English, so I tried to hang out with Colombian friends.”

A former junior soccer player in Bogotá, Castro quickly dove into almost nightly games of soccer on Georgia Southern’s intramural fields with a group of Colombian students, who connected over social media before moving to the U.S.

From there, mastering English in college classrooms became a focal point.

“It was completely different than what I learned before,” said Castro, who attended a bilingual school in Colombia. “I always try to do things on my own, but I was really having a hard time.”

Castro joined a student leadership and volunteer group with his American peers and reached out to professors for help.

“They were really nice and helpful,” he said. “They suggested I read material twice, take notes, read different books and especially read things that were graphic design-related.”

Two years in, Castro was a high-achieving student included on the Dean’s List and the President’s List and was inducted into the National Society of Collegiate Scholars and the national honor society Phi Eta Sigma. He jumped into his major classes inspired.

“I really liked it,” Castro said. “It was better than I expected, working on different programs on the computer, getting to know about branding and typography. I also got to take photography, and I did some animation too. It was interesting to learn about different fields I can go into with graphic design.”

His primary interest is marketing-related branding, and he naturally segued into a student assistant position for the Betty Foy Sanders Department of Art (BFSDA) creating marketing posters and social media graphics for the art gallery. His design for a vehicle wrap was selected to be displayed on the art and design bus that shuttles students to events around the southeast.

“My classes and working in the art department helped me understand design principles,” he said. “My photography classes helped me with the soccer team. I was improving photography skills. It was also a lot of fun.”

In his final semester, Castro was an intern with the Division of Continuing Education, designing social media graphics and layout design for various conferences.

“They have helped me a lot to work with deadlines and meet the client’s requirements,” he said. “Rather than just doing projects, I got to understand what the ads are made for. It goes beyond doing what I want to. It’s more about doing work for clients.”

Admittedly, his emotions are mixed before taking off on his next adventure.

“I’m excited but also a little nervous about getting out there and being in a more professional environment,” he said. “It’s great to take a new step in my life but also sad to leave my friends from here. I’ve made some strong friendships.”

He’s proud to have overcome difficulties and looks forward to sharing his personal takeaways with the world.

“I had the opportunity to come to Georgia Southern and get my degree as a graphic designer,” said Castro. “I enjoy the feeling of being able to achieve something after trying a lot. Some of the things that I believe make me different from the others is the commitment, adaptability and hard work that I put into everything I do. I like to develop a friendship with my clients and my team. I want people, companies, agencies, institutions and organizations to succeed so I can be a successful designer as well. I like to be able to help others with the knowledge that my family, my teachers and traveling have given to me.”