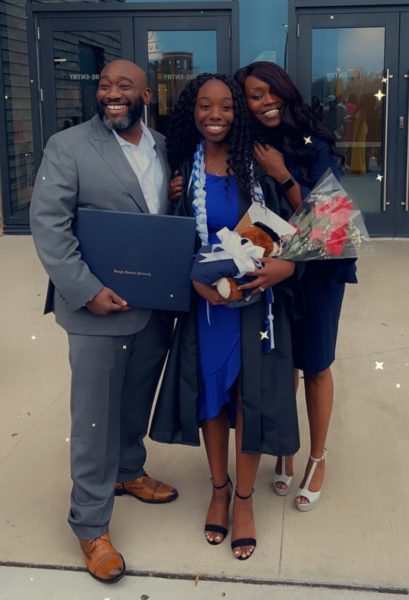 Adriana Proctor not only has big dreams, but has already put in work toward achieving them as she prepares to graduate at 17 years old with a bachelor’s degree in criminal justice and criminology from Georgia Southern University’s College of Behavioral and Social Sciences.

Proctor started college through her high school dual enrollment program in her freshman year and was just 14 years old when she graduated. Spending just two years in high school, she started full time at Georgia Southern’s Armstrong Campus in Savannah when she was 15. She’s done everything with a singular goal in mind – to one day become a lawyer.

“I’ve always wanted to be a lawyer,” Proctor said. “It’s my dream job and would allow me to provide meaningful representation and support to communities where I am needed. I would love to make a difference with children in particular through community initiatives, state agencies or even private practice.”

Despite being years ahead of her peers, Proctor continues to run into new challenges. Since she hasn’t yet reached age 18, she is unable to enter into the same types of agreements as a legal adult.

“Finding work in the criminal justice field has been difficult,” Proctor said. “Due to my age, there have been a number of confidentiality concerns, particularly as it relates to the target population that I would like to work with.”

Proctor hasn’t let these challenges stop her. While she has struggled to find work near her home in Savannah, she continues to work toward her goals.

“I’m working to overcome the age-related issues by looking for work outside of Savannah,” Proctor said. “I’m conducting informational interviews, interacting with professionals from a wide range of fields in order to network and calling businesses and agencies to see if there are any exceptions that can be made for my age.”

This networking has introduced her to new possibilities and opened the door for her introduction to the Bulloch County Public Defender’s Office in Statesboro.

“I partnered with a woman who facilitates a tutoring program for elementary school children,” Proctor said. “She was able to put me in contact with the Statesboro chief of police who connected me with the public defender’s office in Statesboro. I hope to work there, even just as a volunteer, to gain experience working in the legal system.”

Proctor is also working to learn Spanish and found a community in the Hispanic Outreach and Leadership Achievement Program on the Armstrong Campus in Savannah. While this may help her in her future career, it’s importance to her stems from its connection with her heritage.

“I am not completely fluent yet in Spanish, but I have been taking classes since I was in sixth grade,” Proctor said. “Spanish has always been important to me as my father is from Puerto Rico and I was surrounded by it. We made frequent trips there and my paternal grandparents speak both English and Spanish in their home.”

Proctor’s family has been a major source of support during her college years. Both of her parents spent time in the military and her mother has been an inspiration to her.

“My mother has been a significant motivator for me,” Proctor said. “She was able to finish her bachelor’s degree this year and start her master’s in clinical mental health counseling all while taking care of my baby sister.”

Proctor hopes to have a similar impact on those around her.

“I hope to be a source of inspiration for my community,” Proctor said. “I feel drawn to working with children because of their potential, and I feel that at this stage in my life I am perfectly positioned to make a difference in their lives.”